Early one July morning several years ago, my little dog, Liebi, a tiny Pomeranian, got lost in the eight-foot-tall corn in the large field north of my house.

I searched for her and talked with some neighbors, who also began looking for her, but she had completely disappeared. Since searching the entire 40-acre field (over 1.5 million square feet) was impossible, I began to pray, knowing that God was protecting this little 3.5-pound dog and would keep her safe from the coyotes and raccoons and lead her out of the field. I called a Christian Science practitioner to support my prayers in knowing Liebi could never for a moment be outside of God’s constant care.

I was so sure that Liebi would come home safely that I had no fear. I had put her bed out on the porch, thoroughly expecting to see her there the next morning, but when the sun came up, it was empty.

Later that morning a neighbor offered to post a photo of Liebi on social media. After lunch, a lady named Lisa called, saying she’d just gotten home and seen the social media posting about Liebi. She told me about seeing a small dog that morning in the nearest pet store with a woman who was buying a name tag for it. When Lisa had asked about her dog, the woman had become agitated and walked away.

Lisa now felt that this dog must have been Liebi. As we talked, I became convinced that Liebi was not going to be returned. Knowing my little dog had safely found her way out of the cornfield and was safe was a big relief, but I felt very angry about this woman’s dishonesty, since there had been an identification tag on Liebi’s collar.

An article in the Christian Science Sentinel called “Honesty is power” (Leora E. Warren, September 29, 1951) was so encouraging, as I feared this woman intended to keep Liebi. It tells about a family whose dog was stolen, and how they had prayed by affirming that God’s children express honesty and integrity because they are the reflection of their Father-Mother and cannot express anything unlike God, good. They realized that accepting that someone is anything other than God’s honest child would be breaking the Ninth Commandment, “Thou shalt not bear false witness against thy neighbour” (Exodus 20:16). Soon their dog was returned.

While making posters to distribute in town about Liebi being missing, I knew that because God did not see the woman in the pet store as anything but His honest, loving daughter, I couldn’t either. I ended up feeling no ill will toward her and actually began to feel compassion for her, since she clearly thought taking something that didn’t belong to her would bring her happiness. Just as I couldn’t break the Ninth Commandment, I could not accept that she would break the previous one, “Thou shalt not steal” (Exodus 20:15).

Several people in my small town were looking for Liebi, and from them I began hearing of other small dogs in my area that had recently been stolen and never returned. Various leads about her turned up nothing. Despite these stories, I never doubted for a moment that Liebi would be back home, although I had no idea how or when.

However, I did redouble my efforts to understand that Liebi was God’s spiritual idea and that He wouldn’t desert her. Her bed was waiting for her, and I knew she belonged in it, not in someone else’s home.

On the evening of the seventh day, however, my confidence was beginning to waver. I then opened the Christian Science Hymnal to these words in Hymn 86:

O blest is he to whom is given
The instinct that can tell
That God is on the field, although
He seems invisible.
(Frederick W. Faber)

The reassurance that “God is on the field”—was present and active right where Liebi was—was so powerful. The last verse of the hymn begins, “For right is right, since God is God; / And right the day must win,” and it removed any doubts about anything but right being victorious. These words kept coming to me during the night and early the next morning; I was absolutely convinced that God was the only power and would remove any obstacle.

As I was finishing breakfast that morning, eight days after Liebi was lost, I received a call to come get her. She was on the porch of a man who had recognized her as the dog on the posters. She was very weak, and her appearance indicated she had been in the woods or a field and had been attacked by an animal, as she had several wounds, including one very deep one. It occurred to me that if Liebi had been stolen by the woman in the pet store as I had feared, she had decided to let her go.

Later, the Christian Science practitioner mentioned that it had come to her that last evening to pray specifically for Liebi’s life, to vigorously deny that she was in great danger and affirm her safety with her creator, God. I know that the practitioner’s prayers and my work with the powerful message in Hymn 86 saved her life. I see no other possible explanation.

Judging by her weight, I could see Liebi had eaten little or nothing while gone, but she was back to normal within a few days, and the wounds healed up quickly without a trace. There was no indication in her behavior that she had been through any trauma—in fact, she hadn’t been, because she was supported by God’s love the entire time.

Liebi’s return was distinct proof to me of God’s guidance and protection of every creature, even in the most dire situations. This was a beautiful lesson for me, and one for which I’m just as grateful as I am for having Liebi home again. 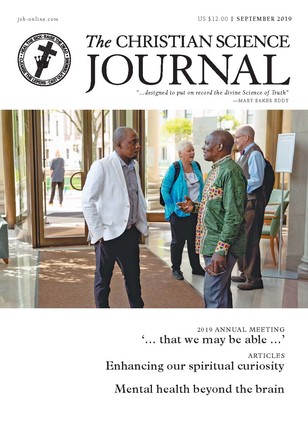 Efforts, appreciation, and healing for all

What does it take?

Rise above the world’s view

Mental health beyond the brain

The best way to get out of the woods

Two healings from reading the Journal

The twenty-third Psalm and prayer about home

Thinking about what is rather than what isn’t