But officer," she said, innocence lacing her voice. "I never noticed that speed limit sign."

Are there exceptions we can make to telling the truth, as well as to basing our lives on the Truth? White lies seem—by a perverted illogic of our materialistic world—to enable us to get out of sticky situations.

Not long ago a young friend of mine, a graduate student in economics, had to make a choice between truth and a "little" lie. She had done very well in her studies up to that point and was in competition for a prestigious university job. The selection was riding on the quality of a "defense" of a paper that she had to make before a jury. The night before the "defense" she discovered some fundamental errors in her research. The temptation to gloss over this fault—after all, none of the jurors would ever notice—seemed great.

To that point in her university experience, she had relied many times on her understanding of spiritual truths. Turning to these truths in all kinds of difficulties had gradually become a natural response. That evening, while thinking—praying—about what she should do, the inconsistency of her now hiding a truth became clear to her. She was God's complete idea. She couldn't rely on—and express—Truth sometimes, but not at other times.

Despite what she felt was the sure loss of the position, she went into the "defense" feeling free, solidly grounded in the truth. I remember thinking when she told me this that it was the Christ—the Truth, coming into her human consciousness—acting in her thought. She explained her faulty research to the jury. In fact, it became one of the major points of a discussion that went more smoothly than she could have possibly imagined. And the result of this "moment of truth"? Not only was she awarded the job, but her grade was one the highest possible.

"What is truth?" is a question that has echoed down the centuries. It's the question asked of Jesus by the Roman governor, Pontius Pilate, during Jesus' trial. Jesus had just explained that his purpose was to "bear witness unto the truth" (John 18:37). But what resonates even louder is Jesus' silence in response to Pilate's question.

Jesus' answer of silence doesn't suggest that there is no answer to Pilate's question, but that the answer lies in listening to Truth's constant communication. At that same trial Jesus said, "Every one that is of the truth heareth my voice" (John 18:37). How do we hear the Truth? How do we feel the Truth? By being, in Jesus' words, "of the truth." By being consistent with the truth, by aligning ourselves consistently with truth in our thought and actions.

It all comes down to the quality of our listening—and then obeying. The nature of Truth, in particular the truths that we need for the present hour, is being revealed to each one of us 24/7. We are able to hear these truths only as we (first) recognize that they are being voiced, and (second) as we consciously listen—as we consciously reach in our thought beyond our human lives and concerns.

Then comes the tough part: obedience. We not only need to hear, but we need to get far beyond the insistent noises of our world that tell us "everybody does it." Then we can shape our actions to be consistent with the Truth. Then we are in, or "of the truth." Just as a character in Shakespeare's Hamlet advises his son, "This above all—to thine own self be true;/ And it must follow, as the night the day,/ Thou canst not then be false to any man."

Alas, how many excuses do we give ourselves for the "white" lies we tell others and ourselves? Jesus' disciple John writes this explosive truth: "Now are we the sons of God" (I John 3:2). Are we the real thing? Or are we faking it? Of course we are the sons of God, now. But as John points out, we can only demonstrate our authenticity—our son-of-God status—by purifying ourselves. By keeping the Christ model in our thought, then "we shall be like him; for we shall see him as he is" (I John 3:2).

How do we gain and maintain this consistency? We can become aware that we are constantly shaping our life. Are we building on the rock of Truth? Or on the sand of fuzzy reasoning and doubtful justifications? Do we truly recognize that Truth is a practical, solid basis for building? Effective in protecting us, even healing us?

The striking thing is that we could even engage in these acts even as we think of ourselves as "good Christian Scientists."

Are we building on the rock of Truth? Or on the sand
of fuzzy reasoning and doubtful justifications?

The only way to deal with these habits is by building up, step by step, the confidence that Jesus had in Truth—building to the point where we consistently recognize and lean on Truth's power and feel the freedom that growing understanding brings. Deep down we know that being authentic, trusting in Truth, can bring us so much more than avoiding the speeding fine, landing that coveted job, or even winning the lottery jackpot.

How great is Truth to us? Jesus knew that Truth has such infinite power that it breaks us free. It heals us. He said, "Ye shall know the truth, and the truth shall make you free" (John 8:32). As we begin to understand the strength, the formidable power of Truth's continuing action, we feel its freeing effects. As we gain even a few glimmers of the beauty of Truth, it transforms our thought and our life. This is what Mary Baker Eddy called the "alterative" effect of Truth (Science and Health, p. 224).

Once during the Cold War when I was returning from East Berlin through the infamous Wall, I needed all the help Truth could give me. I had given a Christian Science lecture under "white lie" pretenses. Since holding a public lecture on Christian Science was forbidden by the totalitarian regime, people were invited to come to a "pretend" birthday party. I had also brought in illegal literature (Der Herold der Christian Science magazines) and, in trying to return to the West, I was being questioned, even accused of subversion. As I was ushered into the commandant's office, I knew that Truth was the only thing that could keep me free—literally.

I prayed to feel Truth's direction. I found myself telling the officer of my love for Luther's translation of the Bible as I showed him my Bible, explaining something of what I was doing. It turned out that he was from Eisleben, Luther's hometown, and confessed an admiration for the great religious leader. He let me go with a stern warning. Truth, God's presence, was guiding me.

I'm still developing my moral compass. Truth is my "north" from where I get my bearings. It gives me whatever authenticity I have. Authenticity becomes ours as we value and embrace Truth as the basis of our being—as we, to our own selves, are true.

John Tyler is a Christian Science practitioner, teacher, and lecturer. He lives in Pittsburgh, Pennsylvania. 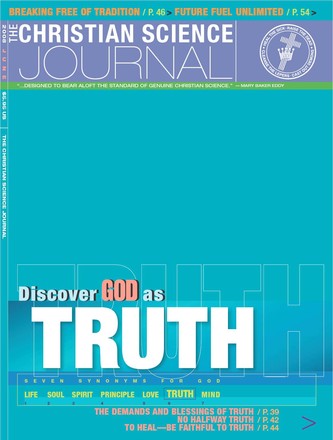 The Father Of Us All

GETTING THE WHOLE VIEW

THE DEMANDS AND BLESSINGS OF TRUTH

TO HEAL—BE FAITHFUL TO TRUTH