IN THE LATE 1990S, my heartbeat become irregular and would speed up to an extremely high rate for long periods of time. Sometimes hours on end. Sometimes all day long. During these months I began thinking about death, and what might happen during and after the transition called death. I started remembering people I knew who had died years before and the circumstances of their passing on. I even thought about unsettling dreams I had as early as fourth grade, when a schoolmate passed on. I just could not shake those thoughts.

I had prayed about the recent symptoms, but my prayers were inconsistent and unfocused. Then one evening I started to have sharp chest pains. I thought I was in the middle of a heart attack. I called a Christian Science practitioner for support, and we prayed with "the scientific statement of being" in Science and Health (p. 468). The prayers of the practitioner helped me with my fears that night, but a few days later, with my heartbeat still irregular and my thoughts still focused on death, I knew there was more that I needed to understand. "If I'm going to spend all this time thinking about death," I thought, "I'd better start seeing it correctly." I decided to look up every reference in Science and Health where Mary Baker Eddy mentions the word death—and also relevant citations in the Bible.

One of the passages that was most helpful was this sentence: "In the illusion of death, mortals wake to the knowledge of two facts: (1) that they are not dead; (2) that they have but passed the portals of a new belief" (p. 251). From the different near-death experiences that have been reported in books and on TV shows, it was evident to me that people did not cease to exist when they "died." They were just at a door to another experience. They often spoke about a bright light or a tunnel beckoning them—and some even gave the impression that it was a heavenly experience. So what was that all about? I know that the Bible states, "The last enemy that shall be destroyed is death" (I Cor. 15:26). If death is the enemy, how could it be something that seemed so enticing to those people?

I found it interesting that Mrs. Eddy referred to passing on as going through a portal of "a new belief." That means that if it's still a belief, and not reality, it's just a temptation—a lie, to be rejected. A line in the spiritual interpretation of the Lord's Prayer confirms this: "And God leadeth us not into temptation, but delivereth us from sin, disease, and death" (Science and Health, p. 17). And the Bible says, "Neither shall they say, Lo here! or, lo there! for, behold, the kingdom of God is within you" (Luke 17:21). I began to understand that we don't need to go through a portal of a new belief to find "the kingdom." In fact, we do not need to go any place at all! What we do need is to rise higher in understanding God as Life, and not be tempted to drift off laterally into a different dream.

As I prayed about these ideas over a period of months, I no longer feared death. I was unimpressed, knowing that this "event" is unreal. I remained in the kingdom where I knew God was already caring for me. The heart trouble and the thoughts about death receded.

One day several months later, I was shopping for a light fixture. As I walked down the store aisle, I had a sharp chest pain. The first thought that came was not, "What is wrong with my body?" but "What am I thinking?" I realized that I was feeling stressed-out about my day. Right then and there in the store I started to fill my thought with gratitude. I was grateful for everything I could think of. I was grateful for our home. The salespeople in the store. I was grateful to God, because I had a firm conviction that I was right now in His kingdom and couldn't have a life outside of it. The entire experience took place in a matter of moments, and the chest pains disappeared, never to return.

But there was one vital component to the healing.

A few weeks after being in the store, I was driving in my car and realized that thoughts about death had slipped into my consciousness again. As I drove, I prayed to understand better what was going on. Then I prayed some more. Finally, I ended my prayer with "God, I don't know what it is that I need to know, but I know you will show me." And then I let it go.

I continued to drive and in a couple of minutes I pulled onto the freeway. There, standing on the overpasses, were hundreds of mourners waiting for a funeral procession. The huge gathering was for a police officer in our city who had been killed in the line of duty. Then it became clear to me, clearer than it ever had before. The thoughts about death I had been thinking weren't my thoughts at all, but rather the world's thought about death—about life ending, vulnerability, loss, and about the unknown. My heart went out to the police officer, his family, and those in mourning. I knew that each and every one of them was safe within the kingdom of heaven at that moment, just as I was. The false beliefs of death could no more affect them than they could me. I thanked God for uncovering this error and showing me how to deal with it within my own thinking. Since that experience, thoughts of death have ceased and have not returned.

In that year of "poor health," there were huge blessings. I came to realize that we are always dealing with a mental process and not a physical one. I understood that slipping from one mortal dream to another is a lie—one that can be neither a terrible event nor a grand adventure. And that Mind, God, is the only true cause and effect. Of course, I was extremely grateful for the healing of the heart symptoms, but beyond that, waking to the truth that each one of us is already in "the kingdom" was the greatest blessing of all.

Thank you, God. Thank you.

Abide not in the realm of dreams,
O man, however fair it seems;

But with clear eye the present
scan,

And hear the call of God and
man. 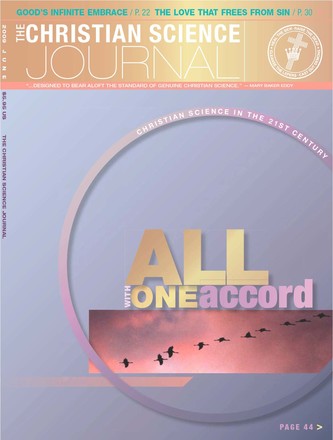 Teaming Up to Serve Church and Community

Christian Science in the Republic of Congo: History in the Making (Part II)

Any Obnoxious Books in This Store?

The LOVE That Frees from Sin

HEALINGS OF SPINAL MENINGITIS AND MONONUCLEOSIS

By CHRIS WYE with contributions from JEAN WYE | June 2009

SURPRISE END TO A DRINKING HABIT

By MEG COWAN with contributions from MAUREEN BROWN | June 2009