One is faced with a critical decision when he has to decide whether to rely wholly on Christian Science or on medical aid. There is no in-between position available. Christian Science is metaphysical in its treatment of disease. That is, it does not treat physical symptoms as if they were objective realities; rather, it considers disease to be mental, a subjective state of human consciousness. Material medicine, on the other hand, treats physicality on the assumption that it contains the evil, whether the basis of this evil is physical or mental. A stand can be taken on one side or the other, but not on both.

The decision is individual. Each should follow his conscience rather than yield to the undue influence of others or to pride, prejudice, or mere tradition. Radio, television, popular periodicals, and word of mouth often give advice on the subject, usually urging the claims of medicine. By comparison, the urgings of Christian Science that man's spiritual resources be resorted to seem only slight.

All the phenomena of human experience, including disease, are inseparable from human mentality, and there is an inherent advantage to a system of treatment which studiously avoids increasing one's ignorance of the mental nature of human experience. Give a mortal a drug, or otherwise manipulate his physical body, and you are making him believe more firmly than before that disease is an objective reality independent of the thinking that conceives it. On the other hand, follow the practice of Christian Science and improve, that is, spiritualize, the thinking of the individual, and not only do you heal him of the disease, but you give him a better sense of the relationship of outward phenomena to human mentality.

In the chapter entitled "Physiology" in Science and Health, Mrs. Eddy writes (p. 166): "As a man thinketh, so is he. Mind is all that feels, acts, or impedes action. Ignorant of this, or shrinking from its implied responsibility, the healing effort is made on the wrong side, and thus the conscious control over the body is lost."

Medical treatment aims to do something to man or for him because, according to its theory, man is a mortal, has become sick, and must be doctored. Christian Science acts on the basis of man's present perfection as the child of God. It agrees completely with the teaching of the first chapter of Genesis, for instance, with these truths (verses 27, 31): "God created man in his own image.... And God saw every thing that he had made, and, behold, it was very good."

The spiritual man, the Godlike man, is "very good," and this means that he is well, free of disease. Nothing has happened to change the truth of man's goodness, hence of his health. But mortals may believe the contrary; that is why Christian Science defines disease as belief, not spiritual reality. And that is why this Science aims to correct mortals' belief in sickness.

Of course, disease is not imagination to the sufferer. It is as real to the human mind as any event or condition is to the five physical senses. It is just as physically evident as what we term the good things of earth. But being a subjective state of mortal consciousness, disease is correctable fundamentally only by the correction of belief in an opposite to God's "very good" creation, spiritual man.

Christian Science provides the rule of thought and action that will correct belief in disease and thus destroy the outward phenomenon of disease and replace it with health. Or, more exactly, it reinstates the rule initially made clear and demonstrated by Christ Jesus (John 8:32), "Ye shall know the truth, and the truth shall make you free." He healed the sick. The Gospels list a wide variety of diseases cured by him, and almost certainly there were many other types not specifically mentioned. And his method involved deliberate change in the thought, and therefore in the bodies, of those who appealed to him for healing.

Mrs. Eddy writes in "Unity of Good" (p. 11): "He annulled the laws of matter, showing them to be laws of mortal mind, not of God. He showed the need of changing this mind and its abortive laws. He demanded a change of consciousness and evidence, and effected this change through the higher laws of God." And she adds farther on in the same paragraph, "He heeded not the taunt, 'That withered hand looks very real and feels very real;' but he cut off this vain boasting and destroyed human pride by taking away the material evidence."

Jesus said (John 14:12), "He that believeth on me, the works that I do shall he do also; and greater works than these shall he do."

Christian Science describes and emphasizes the rule of primitive Christian healing. But study of this rule, the declaration of and belief in it, will do for sick mortals only what study of the rules of music will do for the musician: it will provide a base of understanding from which to act. It is action in accordance with the Christian demand that heals the sick. Jesus also said (John 13:17), "If ye know these things, happy are ye if ye do them."

Christian Science practitioners are available to help those who want to be healed of sickness; they do this by correcting the false beliefs which sickness manifests. One of the functions of practitioners is to open the door of their own thought to the Christ that it may reveal the spiritual perfection of man in the image of God and thus heal the one in need.

Even if the patient appears to be unconscious, he can be healed through Christian Science. And he may find upon awakening to healing that a moral and spiritual improvement has taken place as the result of the practitioner's silent ministrations.

Each individual needs the metaphysical treatment offered by Christian Science, because the beliefs that cause disease should be overcome rather than exchanged for other, and perhaps worse, beliefs. Even if such exchange leaves one with a belief of health rather than of disease, the desideratum is still the spiritual understanding of man's nature as God's child rather than a belief in bodily health.

The body is only thought made manifest, and over-all improvement in the physical and mental state will come only as one's spiritual understanding improves. If the general health of mankind is not improving as it should, it indicates that the beliefs of mortality are not being sufficiently corrected.

Unfortunately for mankind, although certain common and much-feared diseases have been brought under control, other diseases have taken their place and the incidence of disease, considering all types, has increased in the last few decades. Mrs. Eddy partially explains this phenomenon in these words from another chapter of Science and Health entitled "Christian Science Practice" (p. 371): "As frightened children look everywhere for the imaginary ghost, so sick humanity sees danger in every direction, and looks for relief in all ways except the right one. Darkness induces fear. The adult, in bondage to his beliefs, no more comprehends his real being than does the child; and the adult must be taken out of his darkness, before he can get rid of the illusive sufferings which throng the gloaming." And she adds, "The way in divine Science is the only way out of this condition."

Christian Science, not material medicine, corrects the mortal beliefs that constitute the so-called substance of disease and would separate men from the evidence of man's reflection of health. Thus it is to human consciousness that Christian Science reveals and demonstrates the perfection of true manhood. In this demonstration there is true health.

The Christian Scientist faced with choosing this day whom he will serve answers in Joshua's words (24:15), "As for me and my house, we will serve the Lord." 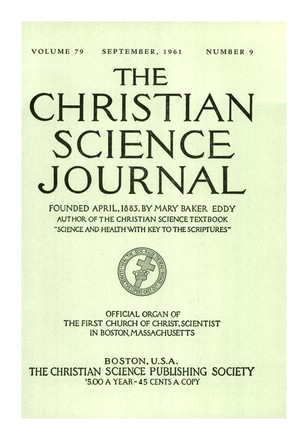 WHAT CAN I DO?

"GO YE INTO ALL THE WORLD"

THE EVER-PRESENCE OF GOD

WHAT IS TRUE LIVING?

SHOWING FORTH THE QUALITIES OF SPIRIT

THE MASTER'S CRITERION FOR DISCIPLESHIP

THE SOLUTION TO INHARMONIOUS RELATIONSHIPS

THE HUMAN CONSCIOUSNESS THAT GOD BESTOWS