MARY BAKER EDDY wrote, "Jesus of Nazareth was the most scientific man that ever trod the globe." She then continued, with what I think of as a definition of what her declaration means: "He [Jesus] plunged beneath the material surface of things, and found the spiritual cause" (Science and Health, p.313). So apparently, being "scientific" is plunging beneath the material surface of things and finding the spiritual cause—the infinite, creative, divine Mind. But does this mean that Christian Scientists oppose scientific endeavors? And why would Mrs. Eddy have called her discovery of Jesus' healing system "Christian Science" if we were not to be scientists of reality?

If I had to sum up what Christ Jesus proved and what Mrs. Eddy discovered in three words, I would say, "Reality is perfect!" Jesus did not come here to impress us with miracles—momentarily setting aside the laws of the universe—in order that he might get us to conform to a certain religious behavior. What would be the point of that? But, on the other hand, if he perceived the much deeper spiritual laws of the universe—only beginning to be hinted at with today's natural sciences—and understood that these perfect laws express the Principle of the universe, infinite Love, then revealing this understanding is a great and wonderful purpose! I can't think of anything more sacred than to awaken thought to perfect spiritual reality, which results in the healing of limitations of any kind, freeing ourselves and others from sickness, sin, and death.

Jesus said, "Be ye therefore perfect, even as your Father which is in heaven is perfect" (Matt. 5:48). Science and Health puts it this way: "The Christlike understanding of scientific being and divine healing includes a perfect Principle and idea,—perfect God and perfect man,—as the basis of thought and demonstration" (p. 259). And it explains Jesus' purpose in this way: "His mission was to reveal the Science of celestial being, to prove what God is and what He does for man....

"Our Master taught no mere theory, doctrine, or belief. It was the divine Principle of all real being which he taught and practiced" (p.26).

The word real means "perfect" in Christian Science. The names Truth, Life, Love, Principle, Mind, Soul, and Spirit, mean "God". The word Christ refers to the perfect idea, man's nature created in God's likeness, immortal, unlimited. The name Jesus refers to the most scientific man to walk our planet and the one who demonstrated the perfection of reality and the reality of perfection. A professor once stated that Christian Science is a science in which Jesus has done all the critical experiments. When a new scientific theory is first illustrated, the process is usually called an "experiment" —the successful experiment confirms the theory. In class, re-creation of the experiment is usually called a "demonstration" since it illustrates the theory involved, but the foundational experiment has already been performed that confirmed that theory. It is in this sense that Christian Scientists speak of "making a demonstration," because whatever ailment or negative situation that has been overcome through prayer is an illustration of the foundational nature of reality that Jesus has already proved in healing everything from limitation and sin, to sickness and death.

Other scientific terms take on expanded meaning. For example, after Mary Baker Eddy's discovery, she gave the name "Science" to Christianity; the name "error" to corporeal sense; and the name "substance" to Mind (see Science and Health, p. 483). Another word that takes on new meaning in these teachings is healing. In Christian Science, we understand this in the context that we do not "fix" anything, as in the common use of the word healing. A healing in Christian Science is an awakening to what is already true, not a recovery of something that was lost. When one is healed, the person feels lighter, inspired, renewed, enlightened. So, in true spiritual healing, we do not gain health. Rather, we throw off a limited way of thinking that seemed only in false belief—to unreliable material sense—to be blocking the truth about ourselves. The key to "spiritual reality healing" is knowing that an error is not real. If something is not true, it was never real.

A college professor once stated that Christian Science is a science in which Jesus has done all the critical experiments.

When we view our planet from outer space, we see that the round Earth has only appeared to have been changed from (or healed of) flatness. But what really changed? Only our perspective. We did not make the round Earth round by rising in altitude. It was already round, and we glimpsed this fact from a higher perspective of reality. So, in Christian Science, the word healing takes on a different meaning: It is not fixing something broken, but rather our awakening to the perfect completeness of what was already true.

Where do we come in—what is our part in a healing? Isn't it to listen for God's ideas? That's it, I believe. We listen for God's ideas and, in turn, the ideas awaken us—with healing as the result. This does not mean that we are to be less scientific, but rather that we are to be more scientific, which means relying less on the evidence of the material senses and listening more to divine intelligence for an understanding of reality.

Christ Jesus was not merely the founder of a religious tradition. If he had been, his followers would simply be caretakers promoting ritual. In Christian Science, Jesus is understood as the greatest perceiver of reality—the divine reality of perfect God and perfect creation. He is the revered, loved, and (as best we can) emulated teacher of the sacred reality of the nature of a loving God and a loved creation. By following his teachings, as rediscovered and demonstrated again by Mary Baker Eddy, we, too, follow the path that shows us how to be free from all limitation. It is a sacred Science because the reality of God's creation is sacred in its perfection. It is a completion of all science because it does not mix questionable material assumptions with foundationally reliable evidence of intelligence in its conclusions. And it is repeatedly demonstrable to anyone willing to plunge "beneath the material surface of things, and [find] the spiritual cause."

Contributing Editor Laurance R. Doyle is an astronomer and principal investigator at the SETI Institute in Mountain View, California. 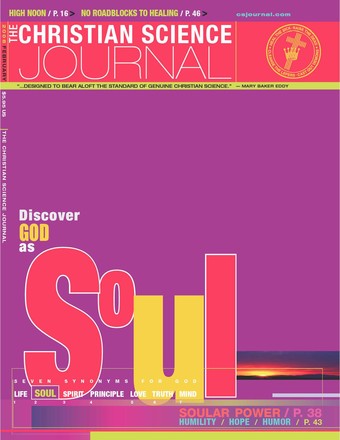 Good News on the Lecture Front: Walking the Talk

By MOLLIE OSBORN with contributions from LYON OSBORN | February 2008

FROM THE CLERK OF THE MOTHER CHURCH