The Sermon, "The Personal and Impersonal Saviour," that occupied the leading place in the February Journal, is the author's worthy Christmas gift to the world. To those who have sat in her class-room it has a special value, because it partially embodies in words, what have been, till now, only ineffaceable impressions of her teaching of the Saviour of Science. But to the universal Christ thought this sermon has a wider relation, whose value and significance can only be seen in the measure that its conception becomes real to individual consciousness.

It will be useful to recall for those who have not yet read the sermon the following passages from it.

"He was the Way, and must suffer in the flesh to show mortals how to escape from the sins of the flesh, through suffering." "After the crucifixion of the personal man, the impersonal Saviour —the divine ideal which leadeth into all Truth— must needs come in Christian Science, or impersonal healing." "This idea, or essence of being, is forever about the Father's business, heralding the Principle of health, holiness, and immortality." "The Science of Truth has appeared in the ripeness of time, and will reappear until it is acknowledged, comprehended, and understood."

Science attacks personality at every point, since it is from the false sense of personality, that the trinity of sin, sickness, and death have sprung, and it is the fortress from which humanity is dominated by error. The destruction of this belief of personality in either God or man, is the condition precedent of the recognition of the Saviour, the God, or the Man of Science.

Can Scientists do a better work than in circulating broadcast the tract containing the sermon which is announced elsewhere in the Journal? The Saviour set forth in this sermon is one that many are ready to receive, and it would be difficult to find in so small a compass so much Christian Science thought that is so near the plane of the best liberal thought of the Christian world outside of Science. At the same time, the higher the understanding of Science, the more will the thought of this sermon be seen to come from the highest and serenest elevations yet opened to the human mind.

The prevalent conception of Jesus as a personal Saviour is fundamental with all the errors of doctrinal theology, and of personal morality and social ethics. To all who are prepared to receive the impersonal Saviour of Science, to "crown the mind power as the Messiah," this sermon will be a precious seed of thought, that will spring up and bear much fruit. The Publishing Society puts it within the reach of every one to sow it freely, by giving it at the bare cost of making. 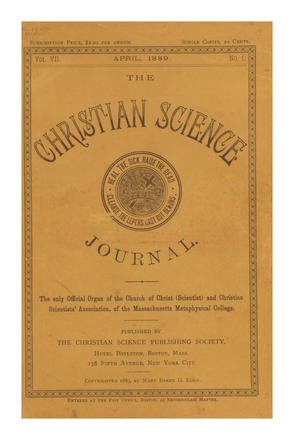 CHRISTIAN SCIENCE AND ITS REVELATOR

WHAT IS IT TO "COME INTO" CHRISTIAN SCIENCE?

SIGNS OF THE TIMES

THE PRICE OF WISDOM

CHRISTIAN SCIENCE A WALL OF PROTECTION

EXTRACTS FROM AN ADDRESS

A CRIME OF MALICIOUS MESMERISM

THE NEW CREATION BY SCIENCE

EXTRACTS FROM CORRESPONDENCE WITH OUR TEACHER

When the eternal Spirit made man, he was given dominion over...

Healing and Reports of Cases

By Editor with contributions from Mary B.G. Eddy | April 1889

The Sermon, "The Personal and Impersonal Saviour," that...