Those who rely exclusively on prayer as taught in Christian Science to prevent the development of disease in the body know that they have to be alert to what they allow into consciousness. They realize that disease or any inharmony often comes as a mental suggestion. And that a suggestion does not require overt argument to gain admission but often easily slips into thought and gets accepted unnoticed. Suggestions concerning our physical welfare are constantly pouring into thought. Some of these are deliberately sent forth to interfere with the saving and healing mission of Christian Science. Others are conclusions drawn from medical theories and practices, or just plain superstition. Regardless of their source, such suggestions await an unwitting acceptance.

It takes mental alertness to not be influenced by these suggestions. Many have found it helpful to follow an instruction in the Manual of The Mother Church (p. 42). The By-Law reads in part, "It shall be the duty of every member of this Church to defend himself daily against aggressive mental suggestion ..." and goes on to point out that such suggestions can make us forget or neglect to do the good works that Christian Science enables us to do for others.

Building daily a defense against such mental intrusions by filling thought with truths of God's goodness and infinite nature makes it possible to detect suggestion for what it is. No matter how aggressive a specific prophecy of impending evil may appear, it is not a fact to act on, nor is a symptom "something." These are never more than mental error and need to be eliminated from thought. We need to be alert to realize that bodily dysfunction often comes simply as a suggestive thought or mental image, perhaps instigated by a current news story, advertisement, or someone relating his or her physical problems.

The thought of illness may begin like this: "I have a pain in my back." Recognize this as a suggestion and not a real condition of the body, and you can deny it a home instead of allowing it to continue developing in thought. You can take a moment to realize that discomfort is not natural, and dismiss it with the conviction that the pain has no truth supporting it and need not be accepted as real. You can further realize that the discomfort has no history and carries no threat of ongoing or increasing illness or suffering. Even though it may bid for attention, the pain or illness really is nothing more than a suggestion and has not the reality and lasting value of spiritual truth.

The Bible explains that God made all, and that He saw everything He had made and "Behold, it was very good" (Gen. 1:31). This is the reality of our being now and forever. One's true identity, or body, is spiritual and good, therefore anything unlike good is not a fact of being but an erroneous suggestion. And we have God-given authority and ability to rule it out of thought and experience.

Out of her spiritual discoveries, Mary Baker Eddy wrote, "The transmission of disease or of certain idiosyncrasies of mortal mind would be impossible if this great fact of being were learned,—namely, that nothing inharmonious can enter being, for Life is God" (Science and Health with Key to the Scriptures, p. 228). The basic need is to be alert that nothing inharmonious can enter the body (which only manifests an individual's state of thought), whether the suggestion comes as an inherited tendency toward some disease, or as something heard in conversation, or from the news media.

No matter how aggressive a specific prophecy of impending evil may appear, it is not a fact to act on, nor is a symptom "something."

At least once a week in my Christian Science healing practice, someone says to me, "I feel a pain" and indicates the location of the pain. The caller continues, "I must be getting ..." and names a particular disease. I find it important at this point to recognize any discordant condition reported to me as suggestion and not as symptom. As Science and Health explains, "The act of describing disease—its symptoms, locality, and fatality—is not scientific" (p. 79). We need never let that which is unscientific into our reasoning.

It can be instructive to hear someone who knows nothing about medical theories describe what he or she feels is a symptom of a certain disease. It helps me realize that disease is not scientific, has no pattern, and need not be accepted as a condition of reality even though current theories may support it. Any hint or suggestion of inharmony is illusion, and treating discord as illusion enables the healer to not let suggestion assume the status of symptom. Thus Christian Science is proved to be as effective in preventing disease as in curing it.

It's not always easy to get rid of "disease beliefs" once they've entered thinking and influenced the body. Obviously, it's far better to keep one's guard up and not admit such beliefs in the first place. But whether some belief of illness is entrenched or is simply knocking at the door for admittance, it can be, and eventually will be, seen for what it is, a lie about God's pure and good creation.

While disease beliefs may be promoted by the desire for profit through selling drugs or some other form of treatment, often the motivation is more unselfish, yet equally damaging. Many a friendly warning regarding catching some disease becomes a source for perpetuating that disease. In a short article titled "Contagion," Mrs. Eddy noted: "Floating with the popular current of mortal thought without questioning the reliability of its conclusions, we do what others do, believe what others believe, and say what others say. Common consent is contagious, and it makes disease catching." The article concludes, "A calm, Christian state of mind is a better preventive of contagion than a drug, or than any other possible sanative method; and the 'perfect Love' that 'casteth out fear' is a sure defense" (Miscellaneous Writings 1883–1896, pp. 228–229).

As many readers of this magazine have experienced, the best defense is to regularly maintain such an awareness of God's always-present goodness that we instinctively reject any suggestion of inharmony as the lie that it is, right when it first bids for acceptance.

Claiming early in your day that there is nothing in you that can respond to or correspond with any suggestion or argument of error, acts to expose suggestions for what they are before they become fixed in your thinking. True and scientific thinking does not respond in any way to mere suggestion but dismisses it. And certainly do not comply with suggestions or bogus arguments by saying, "I'm like that," and actually identify with error.

It's a joy to know that we can stop disease at any point in its development; it does not have to run a prescribed course. I have experienced and known others to have experienced instantaneous healing when disease has been recognized to be what it is, a lie about the actual state of health that is normal to the real individuality of everyone. In a way, every Christian Science healing is instantaneous, for it occurs at that instant when the suggestion of disease is no longer mistaken for fact.

Every time we realize that perfection is the actual and eternal condition of all creation, we are building a consciousness that's immune to suggestions of every nature. By nipping disease in the bud, or earlier, we make way for a full blossoming of uninterrupted health for ourselves and others.

Contributing Editor Bea Roegge is a Christian Science practitioner and teacher. She lives in Chicago, illinois. 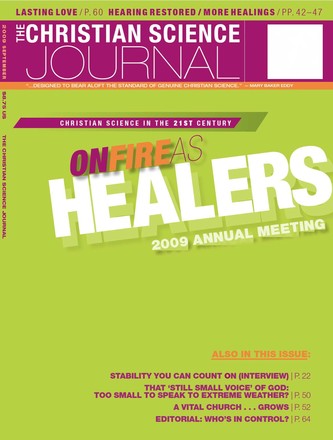 The Power in a Name

Some months back, I spoke on Christian Science healing...

What Are 'Formulas' and Why Are They Forbidden?

STABILITY YOU CAN COUNT ON

A CONVERSATION WITH STEVEN SALT BY JEFFREY HILDNER | September 2009

A WORLDWIDE CHORUS SINGING IN ONE LIGHT

By JANIS DRIVER TREWORGY with contributions from COLIN TREWORGY | September 2009

HEALING EFFECTS AFTER A FALL

By TED HUSAK with contributions from JOYCE HUSAK | September 2009