In the Preface of Science and Health with Key to the Scriptures, which sets forth the divine Science of Mind-healing that Jesus practiced, Mary Baker Eddy wrote, “Future ages must declare what the pioneer has accomplished” (p. vii). This occasional “Mary Baker Eddy and . . .” series looks at how the life and ideas of this extraordinary woman have pointed the way, and continue to point the way, to individual and collective spiritual progress.

The dream of exploring space was still many years away from being realized when Mary Baker Eddy, the Discoverer of Christian Science, asked groundbreaking questions about the universe. Just as astronomers and astronauts reveal facts about the nature of our universe that challenge long-held human convictions, Mrs. Eddy’s own search for Truth led her to revolutionary discoveries about the nature of reality—discoveries that can be applied by anyone to break free from material limitations.

In my own life and career as an engineer working on the design of spacecraft and rockets, I’ve thought a lot about the relationship between Mrs. Eddy’s work and present-day efforts to explore and understand the universe. While some think there is an inherent conflict between science and spirituality, I’ve found just the opposite. Since both science and spirituality are concerned with the study of truth, if—as logic suggests—there is only one truth, then it is inevitable that the two will eventually arrive at the same answer.

Years before people launched satellites, orbited the Earth, and left footprints on the moon, Mrs. Eddy predicted humanity’s march to the stars. In her textbook, Science and Health with Key to the Scriptures, she wrote, “The elements and functions of the physical body and of the physical world will change as mortal mind changes its beliefs. . . .

I first ran across that passage when I was in high school, and as a space enthusiast, it really resonated with me. Early in my career, I was assigned to work on an advanced space telescope designed to uncover the origins of the universe. As excited as I was to be a small part of this groundbreaking project, I found myself facing something of a mental conflict. As a Christian Scientist, I take a fully spiritual view of reality and see the universe as governed by the law of divine Love, God, and without material substance or identity. Could I reconcile this worldview with more materially based efforts to understand the universe around us? As I wrestled with this, that passage about the universe came to mind and helped me see through the seeming impasse—and it piqued my curiosity as to what other passages from Mrs. Eddy’s writings addressed this topic.

Fortunately, she had plenty to say about technological advancement and scientific exploration. Mrs. Eddy believed that the scientific discoveries and technological progress of her era were helping the state of human thought to move ever closer to divine Truth. I was heartened to find that, in a 1901 interview with the New York Herald, she is reported to have said when asked about “the pursuit of modern material inventions”: “Oh, we cannot oppose them. They all tend to newer, finer, more etherealized ways of living. They seek the finer essences. They light the way to the Church of Christ. We use them, we make them our figures of speech. They are preparing the way for us” (The First Church of Christ, Scientist, and Miscellany, p. 345).

And in Science and Health she explains: “Academics of the right sort are requisite. Observation, invention, study, and original thought are expansive and should promote the growth of mortal mind out of itself, out of all that is mortal” (p. 195).

Her writings relate the achievements of astronomy, as it overcame outdated human misconceptions about the nature of the solar system, to Christian Science’s replacement of a material view of existence with a God-based, spiritual view. Science and Health says: “In viewing the sunrise, one finds that it contradicts the evidence before the senses to believe that the earth is in motion and the sun at rest. As astronomy reverses the human perception of the movement of the solar system, so Christian Science reverses the seeming relation of Soul and body and makes body tributary to Mind” (p. 119).

Mary Baker Eddy related the achievements of astronomy to Christian Science’s replacement of a material view of existence with a more accurate spiritual view.

One of the mission goals of the telescope that I worked on is to take a photograph of the first star ever to ignite in the universe, which is known informally as “first light.” As I learned more about the project’s goals while looking at the nearly completed spacecraft from a viewing gallery, I started taking a higher view, thinking about the first chapter of Genesis, where God states, “Let there be light” (verse 3). Referring to this light, which no telescope can see, Science and Health says it “is not from the sun nor from volcanic flames, but it is the revelation of Truth and of spiritual ideas” (p. 504). To me, the “first light” initiative stems from the search for Truth—it points to humanity’s yearning to know the origin of creation and to understand the Principle that governs our universe.

In addition, this telescope is a reflecting telescope, taking images through a complex system of mirrors. I immediately connected this to Mrs. Eddy’s concept that the universe reflects God, an idea perfectly encapsulated in her statement that “astronomical order imitates the action of divine Principle; and the universe, the reflection of God, is thus brought nearer the spiritual fact, and is allied to divine Science as displayed in the everlasting government of the universe” (Science and Health, p. 121). I loved to think of my day-to-day work on this project as “allied to divine Science.”

Ultimately, the telescope experienced a flawless launch early in the morning on Christmas Day 2021. A high-ranking official recognized the significance of the launch date and connected the project not only to the nativity story but also to the passage in Psalms which reads, “The heavens declare the glory of God; and the firmament sheweth his handiwork” (19:1). In the ensuing months, the telescope has stunned the world with breathtaking images.

I expect that, the more the telescope observes the universe, the more it will help limited thinking to grow “out of itself” and throw off outdated, material misconceptions of creation. This will lift consciousness ever closer to the ultimate spiritual truth, and fulfill Mrs. Eddy’s prediction that humanity will look out from the stars “upon the universe.”

The very nature of space exploration involves overcoming false beliefs and material limitations. From the first time that the Wright Flyer lifted off the sands of Kitty Hawk, North Carolina, in 1903 to crewed missions to the moon decades later, a continual march of progress has enabled us to take a more expansive, grander, more accurate view of the universe. If people had always accepted the idea that humanity couldn’t overcome gravity, they never would have challenged this belief with balloons, aircraft, and rockets, ultimately breaking free of Earth’s pull and sending spacecraft to visit other planets.

Leaving behind the mistaken belief that humanity is confined to Earth is an important step out of materialism, in line with Mrs. Eddy’s prediction that innovation would hasten humanity’s abandonment of the darkness of material thinking for the light of spiritual reality. In much the same way, inspired by inventions and scientific achievements that “light the way to the Church of Christ,” we can challenge the falsehood that we are trapped within a material body and existence, with all of its pain, limitations, and heartbreak. We can take a spiritual view of reality, where the divine law of Love governs everything in perfection. In this reality, there is no lack, no hardship, no suffering, no sadness, no fear, no doubt, no loss, no matter.

The understanding of this spiritual reality isn’t an academic theory, naive belief, or attempt to ignore challenges that need to be addressed. It is demonstrable, divine Science. We can apply its laws in our lives with practical, progressive results—ultimately destroying every claim of evil. If in our everyday experience we find ourselves struggling to demonstrate these truths effectively, we can rely on the laws of God to give us the understanding we need to overcome challenges and limitations, just like engineers who return to the base principles to resolve an issue with a rocket.

In the same way that intrepid astronauts broke free of the “surly bonds of Earth” (John Gillespie Magee, Jr., “High Flight”), we can lift our thoughts above the enslaving beliefs of mortal existence to claim our true identity as God’s perfect, divine idea. This spiritual exploration is the ultimate adventure! 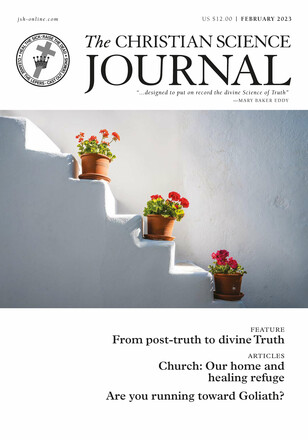 From post-truth to divine Truth

By Mónica B. Esefer Passaglia | February 2023

If I know, you know

By Beth Packer , interviewed by the Journal’s Jenny Sawyer | February 2023

Church: Our home and healing refuge

Are you running toward Goliath?

“These are not my thoughts!”

Disappointments: Steppingstones to a deeper purpose

Blessings and healing from the Church Manual

Love directed me to the right house