AFTER ALL THE Thanksgiving guests had gone home and the leftovers had been put away, I congratulated myself on having shown restraint. Though a big fan of homemade stuffing and pumpkin pie, I had somehow managed to eat in moderation and not let fear of calories and overindulgence rule the day.

But late that night, I began to experience what had been widely described in media reports as stomach flu. Despite my self-control earlier in the day, it was all coming up now anyway. I decided to tough it out, and not wanting to wake anyone up, I retired to a downstairs bathroom for the rest of the night.

The next day, I finally turned to prayer and spiritual study for healing. The opening line of a favorite hymn was especially comforting: "Not what I am, O Lord, but what Thou art" (Horatius Bonar, Christian Science Hymnal, No. 195). It was a call to subdue the material sense of my well-being and to start acknowledging my divine source, God, and His healing presence. But as the day progressed, I went through more of the same symptoms. The prospect of enduring another all-night session left me more than a little downhearted. Mentally, the questions tumbled out: "What's going on? Why won't this yield? How long am I going to have to put up with this?"

Not long, as it turned out, though I didn't know that at the time. That night not only did I feel physically worn out, I had also begun to experience numbness in my hands and arms, and the tingling seemed to be spreading all over my body. It suddenly occurred to me, here at another midnight hour, that I had better do something quickly before I lost consciousness and could no longer defend myself. I tried to explain this line of reasoning to my wife, but she refused to be alarmed. Instead, she calmly asked if I was ready to ask our Christian Science teacher for some prayerful support. Despite the dire circumstances, I actually heard myself saying that I didn't want to put her out at such an hour, and that I was in no condition to talk with anyone anyway. And the clincher: I even argued that I shouldn't have to ask for help, that I should be able to overcome this situation through my own prayerful work.

Moments later, however, this resistance to calling my teacher seemed to melt away. In retrospect, I realized how a passage in Science and Health lovingly counsels us past this hesitation: "If students do not readily heal themselves, they should early call an experienced Christian Scientist to aid them. If they are unwilling to do this for themselves, they need only to know that error cannot produce this unnatural reluctance" (p. 420).

My wife made the call. In less than ten seconds, my system was completely restored to normal. All feeling returned, everything was functioning normally, and I was me again—completely free from every one of the previous symptoms. Actually, I was a new man.

I later asked my teacher what she had thought about when she got the call for help. She told me that her prayer began with this truth from the chapter "Christian Science Practice" in Science and Health: "Consciousness constructs a better body when faith in matter has been conquered." And she then declared, "I know Howie, and Howie doesn't have any faith in matter." I knew that she was talking about my spiritual identity, my only true individuality, created and cared for by God. That was it. I was healed.

What about this new man?

That passage about a better body continues, "Correct material belief by spiritual understanding, and Spirit will form you anew. You will never fear again except to offend God, and you will never believe that heart or any portion of the body can destroy you" (p. 425).

Ever since this grueling ordeal that ended in a wonderfully quick healing, I've been aware of a change in my approach to such pursuits as weight loss, exercise, and getting in shape. I still work out, but now my goal is not to build a better body through lifting weights. Instead, I see it as an opportunity to put my God-given dominion over the body into practice, and to get into shape spiritually—through the understanding that I'm completely governed by the law of divine Mind, God's law. I've seen that this means the body is in submission, rather than in charge. And just as the hymn reminds us, it starts with the acclamation, "Not what I am, O Lord, but what Thou art." 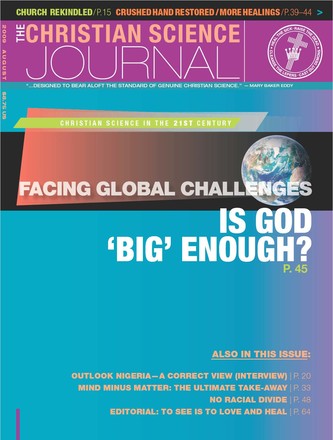 The Bible and the Nature of Warfare

A VISION TO COMMUNICATE

The Voice of Love

Open to the World

Mind Minus Matter: The Ultimate Take-away

A HEART IN PROTEST