YEARS AGO, at 12 or 13, I was involved in many activities at school and excelled in sports and academics. Everything seemed to be going very well. However, what I didn't realize at the time was just how scared I was of the world and of growing up. I didn't feel safe. I didn't feel in control of my life. In addition, I didn't like the way my body looked, as it didn't meet my standards of perfection. This self-criticism had been going on for quite some time.

As a result, I decided to put myself on a diet to lose about five pounds. Soon I decided this wasn't enough, so I kept going. I lost more and more weight, and I spiraled into an obsession with eating as little as possible. I was fearful that anything I ate would make me fat. After a few months of extensive physical activity and very little food, I had dropped an alarming amount of weight. Yet, my image in the mirror appeared to me as always too big. No one could convince me that I was too thin. I liked the way I looked, all skin and bones—and it was awful. I was completely mesmerized by the belief that I had control over something (my weight), and that I had to make my body look perfect.

During this time, my family had become very concerned. They had no idea what the problem could be. At the time, eating disorders such as anorexia didn't have labels and most people, even those in the field of healthcare, didn't know much, if anything, about these conditions.

I had been raised in Christian Science, and my family had always relied on it for healing and for guidance. So it was natural for my mother to turn to prayer for a solution. She called a Christian Science practitioner for help. My mother also felt impelled to talk with friends for advice about what might be going on. In addition to my family, teachers and other individuals at my school became very concerned about me. The school insisted I go for checkups with the school nurse, who found nothing wrong. They also insisted on a visit to a doctor, as did my father, who respected Christian Science but didn't study it himself. In order to be considerate of everyone concerned, my mother made an appointment. After the examination, the doctor concluded that I was anemic and needed to eat more. He recommended that I eat a few tablespoons of peanut butter and vegetable oil per day to remedy the problem. Little did the doctor know that this recommendation to eat caused me to have tremendous fear, and I had no intention of complying.

As I continued to lose weight, my family became fearful for my life. However, my mother knew that prayer was reliable, and she continued to get help from the practitioner. The practitioner prayed with both of us to see me as God's true image, as spiritual and that I was governed by God's love rather than by fear. She talked to us about the fact that God, not food, was the source of my being. I remember one of the passages from the Bible that we focused on at the time was from Jesus' Sermon on the Mount, part of which reads, "Is not the life more than meat, and the body than raiment?" (Matt. 6:25).

At first, I didn't listen. I didn't want to hear it. Then one evening as things seemed to be spiraling downward and the family was talking about sending me to the hospital, the practitioner called my mother to ask about me. After she and my mother hung up, my mother placed dinner on the table and no one made any comments. I was not in a state of mind to listen to anyone. I don't know what specific spiritual truths the practitioner was praying at the time, but I began to eat. I finished an entire casserole myself and never even realized it! My family never said a word. It was a glorious turning point.

From this point on, I gradually began to eat normally. This regular and healthy intake of food continued. Divine Mind had complete control over me. The human mind had no power to resist. I woke up from the mesmeric state I'd been in and started to realize what had been going on. I began to feel God's love and presence all around me. I felt safe for the first time.

Over the next several months, the weight began to come back on. During this time I willingly worked with the practitioner to better understand my identity as being entirely spiritual and that I was loved and cared for by God. I realized that food did not have power to govern my life or my sense of a physical body. God was the only governing source, and I could remain safe in this fact. I also began to see that God, not a mortal mind or body, defined who I was.

What was amazing about this healing was just how thorough and complete it was. Not only was I healed of the eating disorder, but other obsessive habits that I had not realized were abnormal, including excessive perfectionism, completely fell away. I came to realize that perfection comes from God, Spirit, As His image and likeness, I didn't need to try to be humanly perfect, because I already am perfect, in his eyes. My fear of going forward in the world also disappeared. I felt safe in the knowledge that God was my life and that God was guiding me every step of the way. During this period, I also remember reading another helpful passage in the Bible: "Be not conformed to this world: but be ye transformed by the renewing of your mind" (Rom. 12:2). This transformation in my thought was what was happening. Even though it took some time, I was being transformed by the truth that I was governed by divine Mind, the only Mind. I realized that I had nothing to fear in God's presence. That wonderful feeling of God's love always being right here, right now, changed my life and completely restored my body to normalcy.

I am grateful beyond words for Christian Science. 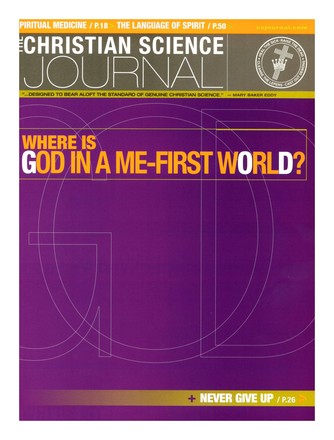 In the Service of Others

A Church Prays About Vandalism

PAIN FROM INJURY AND COLD SYMPTOMS—HEALED

ILLNESS AND FEELINGS OF SUBJECTION—HEALED

By STEVE WARREN with contributions from MARK WARREN | November 2007

THE KALEIDOSCOPE OF SPIRIT