I took an ice-skating class in my final semester of college. After class one day, since we seemed ambitious, our teacher was showing another student and me how to perform more advanced tricks. “The Jenkins” involves crossing one leg behind the other as you turn in a tight circle, and then placing your hands near the ground in front of you, bending down close to the ice.

When I tried to do this trick, I lost my balance and fell backward onto my head with a loud thud. The other student and some employees nearby were very concerned. But my instructor remained calm and helped me stand up.

As I sat on the bench, the facility manager came to diagnose me. I told him that I was grateful for God’s protection, and I did not feel hurt. I wanted to be transparent, so I said that I was a Christian Scientist and that I chose to rely on prayer for healing in the case of emergency. They were still concerned. The person who diagnosed me began to describe many symptoms I could expect as a result of my fall. I became a little frustrated; I had not asked to be told how my body should feel, yet here I was being inundated with descriptions of symptoms. But at the same time I knew they only wanted to help, so I appreciated that. They let me go home.

The student who had been skating with me was happy to drive me to my dorm. As soon as I got in the car, I called a Christian Science practitioner to aid me in praying. But while in the car, I felt I was losing consciousness, and I could no longer see. It was very difficult, but I knew God’s care was always with me. I remember focusing on feeling aware of divine Love—both receiving divine Love in my consciousness and expressing it, too. I knew that, as the disciple John says, “Perfect love casteth out fear” (I John 4:18). In Science and Health with Key to the Scriptures Mary Baker Eddy says, “If you succeed in wholly removing the fear, your patient is healed” (pp. 411–412). I made it home safely.

As I listened to the Christian Science Bible Lesson several times that afternoon, this passage from Isaiah stood out to me because it was so comforting and relevant to my situation: “Hast thou not known? hast thou not heard, that the everlasting God, the Lord, the Creator of the ends of the earth, fainteth not, neither is weary?… He giveth power to the faint; and to them that have no might he increaseth strength” (Isaiah 40:28, 29).

During the evening some unpleasant and aggressive symptoms appeared, but they steadily lessened as the practitioner and I prayed; I saw consistent and rapid improvement. My vision became clear again, and other symptoms related to a concussion quickly dissipated.

I had been told at the rink not to go to sleep if I felt sleepy (because of the concussion). But I felt that my healing was complete, so, at the end of the day, knowing that I was safely within God’s kingdom, I went to sleep as usual. The next day I was very grateful to God, and I biked to the grocery store and back with joy. I was completely healed, and there have been no further symptoms.

I’m so grateful to know that Christian Science brings quick and permanent healing.

Joseph Prior
Nashville, Tennessee, US 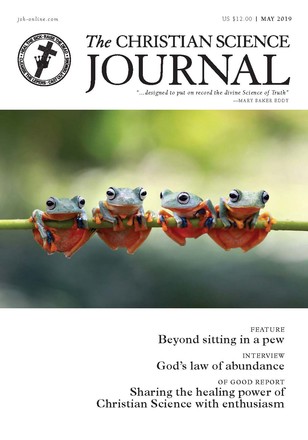