During The 1960s, like many of my peers I decided to experiment with drugs, including alcohol and nicotine. What at first seemed like an exciting adventure turned into a dark dependence on many of these drugs.

By the time I was nineteen, I was getting high every day, mainly on speed (methamphetamines), cocaine, and marijuana, and I'd tried numerous other drugs. I also smoked cigarettes heavily. When I couldn't get the other drugs, whiskey or beer was substituted. Getting high was a way of rebelling against the "establishment" in my country and everything it represented at the time.

But by the time I was 23, I had lost a good job, had two failed marriages, was separated from my two small children, and began feeling very guilty about what I had done. The consequences of the bad choices I had made were closing in on me. I had personal and financial responsibilities I couldn't meet, and I felt it was only a matter of time before my life would turn into a tragedy.

At this lowest point of desperation I got a job as an entry-level machine operator for a manufacturing company. During the first year or so that I was employed there, I spoke with the owner of the company occasionally as he walked by my work area. There was something different about him—he seemed to have an inner peace that I had never encountered in a person.

One day I asked him where he got his ideas, and the next day he gave me a book, Science and Health. I took it home and began to read it. From the very first reading, I found the ideas in it both comforting and awakening. The first chapter, "Prayer," showed me that I could reverse my course and turn to God for healing.

Soon after, I told the owner of the business that I had a bad drug habit. I'll never forget his response. "You must never condemn yourself," he said. Hearing this after I had already repeatedly condemned myself to an unhappy ending was so uplifting that for the first time in years I felt like there was hope. The news that God loved me and that I was His child and could be forgiven for all the mistakes I had made, put me on the right path.

I began to study daily the Bible Lesson from the Christian Science Quarterly. My commitment to do this would turn out to be the foundation for turning my life around. Every week I gained a greater understanding of God's goodness and the perfection of His creation. Self-centered thinking, which had led to my self-destructive behavior, gave way to a greater appreciation for others and a sincere interest in their well-being. This change in thought began to manifest itself in my life. Not only was the desire to get high beginning to lose its attraction, I began feeling God's presence in every aspect of my life. An outlook that included happiness and success was replacing thoughts of gloom and doom, which had dominated my thinking.

After some months, I asked a Christian Science practitioner to pray for me to support my own prayers. This help through prayer resulted in steady progress, and I stopped using the harder drugs. However, I was still smoking marijuana and cigarettes. I recall one time calling the practitioner and expressing great frustration to him that I wasn't able to overcome these habits. As usual, he listened. But his response was brief—a simple statement from Science and Health: "The power of Christian Science and divine Love is omnipotent. It is indeed adequate to unclasp the hold and to destroy disease, sin, and death" (p. 412). At first it seemed strange to me that the practitioner just ended the conversation this way, but over time I realized that this statement from Science and Health was a law of God, not merely a theological concept. The power of divine Love, which I had come to understand through Christian Science, was in fact loosening me from the grip of addiction. As I studied and did my best to express this Love and all of God's qualities in my daily interactions, my life transformed.

During the next couple of years, I gained complete freedom from tobacco and marijuana. Through the many years of study and progress that have followed, I have learned that there are other kinds of holds (such as criticism of others) that can prevent me from seeing God's goodness expressed in my life. But these more subtle holds can also be unclasped and destroyed.

I should mention that my children grew up without any drug abuse on their part and went on to earn advanced college degrees. Today both are married with families of their own. I eventually married a woman who had a young son who had no contact with his father. This gave me a new opportunity to be a good dad and husband, for which I am very grateful. Just as important, I found the inner peace, happiness, and closeness to God that every heart truly desires.

In the Bible, the book of Joel says, "And I will restore to you the years that the locust hath eaten" (Joel 2:25). This was surely the reality for me. My own experience has taught me that anyone's life can be turned around and restored to them, no matter how dire their present circumstances or how big the mistakes they've made.

This article is included in:
2010 - PAMPHLET 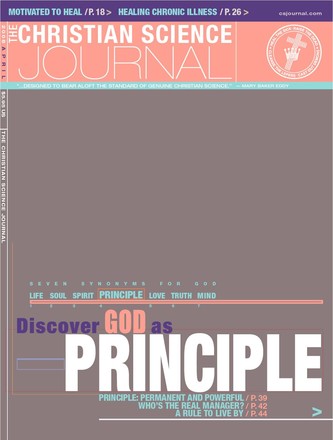 IT SAYS IT'S BY MARY BAKER EDDY—BUT IS IT REALLY?

A CONVERSATION WITH BEVERLY DEWINDT BY ROSALIE E. DUNBAR | April 2008

THE INWARD NATURE OF HEALING

WHO'S THE REAL MANAGER?

A RULE TO LIVE BY