When authorities predict that incidence of a certain disease may reach epidemic proportions, what is the responsibility of Christian Scientists? It is fundamental to the practice of Christian Science to do what our Leader, Mrs. Eddy, expected we would do: prayerfully respond to mankind's needs. She writes, "At a time of contagious disease, Christian Scientists endeavor to rise in consciousness to the true sense of the omnipotence of Life, Truth, and Love, and this great fact in Christian Science realized will stop a contagion."
The First Church of Christ, Scientist, and Miscellany, p. 116.

The spiritual understanding that God is omnipotent, All, is like an invisible but formidable line in our consciousness that divides reality from unreality. This "line" is a barrier against every suggestion of evil, since fear of evil can never trespass where God's allness is understood. And the demonstration of what we understand, expressed in morality and spiritual purification, reverses the threat that disease can exist at all, much less spread, with the truth that God, good, is already everywhere - a fact which precludes evil.

Understanding that disease is illusory, more a mental suggestion than a physical phenomenon, does not make us indifferent to the fears of others or hardened to suffering. Our Master, Christ Jesus, exemplified the fearless, loving attitude of a true Christian toward someone suffering from contagious disease when he touched and healed an "untouchable" leper.
See Matt. 8:2,3. If he had thought that disease was inevitable or irreversible, he could not have destroyed it.

Yet today many believe that viruses can indiscriminately spread infection and not be affected by the healing protest of prayer. Christian Science, following the Master's example, challenges this line of reasoning.

Because God is omnipotent Mind, Spirit, this Science deduces that disease doesn't have of itself intelligence, substance, or power with which to spread itself discriminately or indiscriminately, intentionally or otherwise. Whatever influence matter seems to have comes through the carnal or mortal mind, which suggests a reality or power apart from God, the only Mind and Life of man, who is created spiritual in God's likeness.

If we would contribute to stopping a threat of contagion, we must call a halt in our lives to giving sway to the whole idolatrous claim of mortal-mindedness. Praying to overcome belief in and fear of disease through understanding that God is the only intelligence, substance, or Life of anyone is basic to the worship of one God. The basis for dependence on prayer for healing and preventing disease is the God-revealed truth of being. And the truth is that God, good, never created anything evil, harmful, or destructive.

Contagion claims power to mushroom through "thought-germs" of fear or sin. But we can watch what we think, accepting as true only what we want to express or to see expressed. We can watch what we do, that our lives may increasingly incline toward God. Although all sin is self-punishing until it is forsaken and destroyed, we need not consent to the suggestion that disease exists as a divine punishment for the unwatchful or the wrongdoer. Disease doesn't exist at all in the omnipresence of God, so one might reason that a sure remedy for believing in disease would be gaining a better understanding of God, and of what does dwell in His presence. Mrs. Eddy cautions us, "Lest human reason becloud spiritual understanding, say not in thy heart: Sickness is possible because one's thought and conduct do not afford a sufficient defence against it."
Miscellany, p. 161.

Christian virtue and spiritual understanding may serve to avail us of the defense from all evil—the defense implicit in the omnipotence of God, unopposed good. But it isn't just our thinking and living habits that exempt us from disease; the actual fact that God didn't create disease prohibits its coexistence with His man, our true identity. Man is invulnerable because God, good, is All-in-all.

To be truly free of the liability to be sick we must realize our total exemption from disease through daily, consecrated practice that rests on understanding the basis for our freedom. This freedom inheres in man's spiritual, sinless nature as God's likeness. Through moral living that is anchored in spiritual understanding we wake to realize the truth of being; nevertheless, even base immorality cannot change the fact that the truth of being is true and can be demonstrated. From the moment anyone glimpses and begins to gravitate toward truth, it can be proved to be a sure defense against aggressive suggestion and a law to his or her experience—a law that increasingly rules out sin and penalty.

We cannot fully realize our exemption from disease and sin without understanding at least in part that this exemption can be demonstrated by all. Even those who appear to be trampling on the moral and spiritual demands that Christ, Truth, makes upon mortals can reform and be regenerated through Christ-power. And once we do understand this we would no more fail to protest prayerfully a threat to the world population than we would fail to defend prayerfully our own safety.

Science and Health sets forth the divine system of healing through which all manner of disease and degradation can be cured and prevented. Ultimately, our understanding of this system, rather than the details we know about disease, is what enables us to heal or prevent disease. While we certainly do cooperate with legal requirements concerning contagion, our dominion over disease comes about through our practice of what we know and prove of the truth of being.

If you are seeking healing or realization of your spiritual immunity from disease, you can glean much by pondering and honestly practicing such truths from the Christian Science textbook as this one: "It must be clear to you that sickness is no more the reality of being than is sin. This mortal dream of sickness, sin, and death should cease through Christian Science. Then one disease would be as readily destroyed as another."
Science and Health, p. 4 1 8.

The method of Christian Science Mind-healing applies to all cases, and the treatment of every case. Even if cases have similar or identical symptoms, the treatment of each one is individual. But touching on our need to help check the apparently spreading influence of belief in contagion, we are given a divine promise that covers all claims of communicable suffering. Our textbook declares, "Truth handles the most malignant contagion with perfect assurance."
Ibid., p. 176.

Because the action of Truth is irreversible and inevitably blesses all, the fear of contagion and its effects can be reversed. The moral influence shed abroad through our sharing and proving of Christian Science is divinely empowered to impugn belief in and indulgence of evil and the so-called communicability of immorality. Instead of guilt and the suffering it entails being able to attack and invade the sanctity of innocence and purity that belong to us as children of God, innocence and purity have power to pursue, overtake, and destroy every vestige of belief in sin and suffering.

Neither sin nor disease has any reality in truth, and because this is so, the very belief that they do vanishes as understanding grows in individual consciousness until it overflows in healing works. As goodness is demonstrated in this way, we come to see that the only thing that could be transmitted to man is the good which God bestows. And this could never be a vehicle for alarm.
CAROLYN B. SWAN 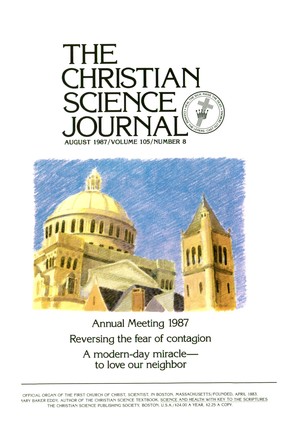 Are we mental pussycats?

Because God is Truth...

They answered the call: Alfred Farlow

On not being "error's advocate"

Reversing the fear of contagion

A modern-day miracle— to love our neighbor

There have been many occasions in my...

I have been a practicing Christian Scientist...

My first testimony appeared in the Christian Science Sentinel...

Christian Science was presented to my...