Several years ago, for about five months, I experienced an alarming and painful physical ailment.

As I prayed, I realized I had been unknowingly harboring stress and resentment. My husband-to-be and I were planning our wedding, and I had a nagging worry about how some of the wedding guests would get along at the wedding after not speaking to each other in decades. Additionally, at work, a colleague was unkind to me, and in yet another situation with friends, I felt wronged and misrepresented. Although I hadn’t thought about these issues often, it became clear that I was holding on to resentment.

Amid this turbulence, one day driving on the highway, I was involved in a three-car accident; I saw something happening with two cars, and was unable to avoid a collision. But moments after this happened, a comforting thought came to me that I was OK under any circumstance because God, divine Love, was always with me. The car was totaled, but I was able to push the door open enough to walk out without a scratch, with the exception of minor injuries from the airbag. The officials involved were shocked to see that I was fine. The others involved were OK, too, but were very upset about the accident and conditions of their cars.

Later that day, I spent some time praying to understand that no accident could really happen within the infinite care that God was always providing everyone. I prayed with the following from page 397 in Science and Health with Key to the Scriptures by Mary Baker Eddy: “When an accident happens, you think or exclaim, ‘I am hurt!’ Your thought is more powerful than your words, more powerful than the accident itself, to make the injury real.

“Now reverse the process. Declare that you are not hurt and understand the reason why, and you will find the ensuing good effects to be in exact proportion to your disbelief in physics, and your fidelity to divine metaphysics, confidence in God as All, which the Scriptures declare Him to be.”

It was clear to me that in the safety of God’s love, there could never be “colliding” ideas, because all of His ideas work together in perfect harmony.

I prayed until at one point that day, I saw that “enough was enough” with regard to all of the drama I’d been experiencing in my life. It became clear to me that the claim of animal magnetism, a subject Mrs. Eddy talks about in her writings, needed to be handled in prayer. To me, animal magnetism is any belief arguing for the reality of a power apart from God. Or, simply put, any claim of a false power that would pull thought away from God. I prayed to glimpse the powerlessness of evil. Even though my circumstances felt tumultuous across the board, I kept my thoughts on God and God alone.

It was also revealed to me in prayer that any belief of evil is always impersonal. There is a chapter called “Animal Magnetism Unmasked” in Science and Health, and it helped me see that I had been seeing a disguise or mask. The mesmerism I felt from the apparent magnitude of these events had temporarily turned me away from what I knew to be true. God’s love could uncover the true, harmonious identity of all of the individuals I was having trouble with. I couldn’t be fooled by false claims or masks. I also could not have a false mask, or be misrepresented by others.

I also saw more clearly that the painful physical condition I had been struggling with for the past several months was a misrepresentation of my true identity as God’s loved child. Additionally, with regard to my other struggles, the claim that I or anyone could ever be represented by anything but Love needed to be dispensed with in my consciousness.

The real “representatives” are messages from God to man. Science and Health says: “Angels are God’s representatives. These upward-soaring beings never lead towards self, sin, or materiality, but guide to the divine Principle of all good, whither every real individuality, image, or likeness of God, gathers. By giving earnest heed to these spiritual guides they tarry with us, and we entertain ‘angels unawares’ ” (p. 299). These angels reveal our true harmonious nature as God’s harmonious image and likeness.

Although I was making spiritual progress after the accident, self-pity began to take hold, and I thought, “Why is all of this stuff happening to me?” But then, this lovely message from God broke through: “You were safe today, weren’t you? Don’t you know how much I love you?” This was so powerful. I can only describe it as a knowing that came straight from divine Love.

Tears of gratitude streamed down my face. I saw that God never sends disharmony, nor did He create it. Everyone involved in the incident on the highway was completely OK, and I wasn’t ever a victim. I saw that just as God had kept me safe from harm that day, He was always keeping me safe, and that I was protected from any physical belief or claim of inharmony—no matter how worrisome it seemed. From this time forward, there was no further discomfort or pain. Divine Love had healed the painful physical condition, the false belief, and the healing has been permanent.

Later that evening, I received two calls. The first was from a fellow Christian Scientist. She explained that she had been driving along the highway. Traffic had come to a stop, and she noticed an accident ahead. She felt guided to start praying immediately. It wasn’t until later, when her car got closer, that she saw my car. This reminded me of Hymn 9 from the Christian Science Hymnal,

He knows the angels that you need,
And sends them to your side,
To comfort, guard and guide.
(Violet Hay)

The second call came from one of the women involved in the accident that day. She had seemed so angry about the situation earlier, but she so lovingly called to check in. This was her true spiritual nature that I was seeing. Her love was evidence of her true expression of divine Love, Mind.

Mrs. Eddy writes this about Christian Science: “The effect of this Science is to stir the human mind to a change of base, on which it may yield to the harmony of the divine Mind” (Science and Health, p. 162). I realized that healing was going on.

Soon, the colleague I was having so much trouble with invited me to lunch as friends. And I forgave the other individuals I was having trouble with; they apologized as well. Every detail was taken care of, and my husband-to-be and I were able to obtain the right car to replace the one that had been wrecked. All the stress, resentment, and pain melted away before Love’s power. I also had such clarity that these difficult situations were not realities in the first place.

Our wedding went even better than expected, and the interactions between our guests were peaceful and loving. It was a joyful day! This newfound understanding of harmony was what I needed to help others through prayer. I am so grateful for ongoing daily proof that all of God’s children, His ideas, work together in harmony. 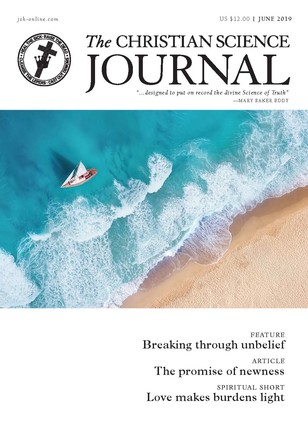