When I was a small child, our family was quite poor and didn’t have much to eat. We lived in a one-room cabin in a remote area of South Dakota during the Dust Bowl conditions of the Great Depression. My mother never expected to get out of those circumstances, but when a friend sent her a copy of the Christian Science textbook, Science and Health with Key to the Scriptures by Mary Baker Eddy, it was as if she had been thrown a lifeline. She started reading the book and went from feeling helplessly locked in, to having new hope.

Life changed radically for us after that. We were able to move to a more prosperous community in Oregon, where Mother joined a branch Church of Christ, Scientist, and enrolled my siblings and me in the Christian Science Sunday School. I remember the teacher telling us that God was everywhere and surrounded us, which was continually comforting.

There were many healings in our family as I was growing up. When I was thirteen, I was taken to an eye doctor for new glasses. After examining my eyes, the doctor said I had a condition of the optic nerves that would eventually lead to blindness. My mother was a diligent student of Christian Science, and I know she prayed about my eyesight. No more was said about it then, and the predicted blindness never came about.

Decades later, an eye doctor who was examining me for new glasses noticed signs that I’d had an eye disease. “You should be blind by now,” he remarked. I told him I did recall another optometrist predicting that situation. He asked how long ago that was, and I replied that I had been in my early teens. He stepped back, somewhat amazed, and said if it had been that long ago, I surely had nothing to worry about now.

Another 25 years has passed since then, and my vision is still good. This is a reminder to me that true vision is not in material eyes, but in spiritual discernment. Science and Health says: “Sight, hearing, all the spiritual senses of man, are eternal. They cannot be lost. Their reality and immortality are in Spirit and understanding, not in matter,—hence their permanence” (p. 486).

In 2006, a member of an organization I was working for called and launched into a rant about a decision our board of directors had made that enraged him. He became so unpleasant that I told him I would inform the board of his displeasure, but I would no longer listen to him. Then I hung up the phone. When I arose from my chair, my shoe caught on something, and it was as though I had been thrown up into the air and then tossed violently onto the floor, landing with my body over my left hand. The wrist appeared broken, and my entire hand became badly swollen.

I asked a Christian Science practitioner to pray with me, and he lovingly assured me I could not suffer from anything outside my consciousness. I felt led to tell him of the contentious conversation I’d had just before I fell. As we prayed further, it dawned on me that the angry encounter with the caller was no part of my true consciousness as the reflection of the peaceful and loving divine Mind. I was able to put the unpleasant experience entirely out of thought, and after that my hand quickly returned to normal.

In 2012 I lost my grip on a cup I was filling and spilled boiling hot water on my leg. When my daughter removed my slacks, we could see that the skin on my thigh was badly burned. I spoke on the phone with a Christian Science practitioner, who firmly declared, “God does not sanction this.” Still in shock and trembling from the pain, I contemplated that statement, and reasoned that since God is Spirit, His creation, reflecting Him, has to be spiritual, perfect, and indestructible. It suddenly seemed preposterous to me that God would make man out of fragile, corruptible matter! Immediately the violent shaking stopped.

Then I began thinking through one of Mrs. Eddy’s poems, “Mother’s Evening Prayer” (Poems, p. 4). As I pondered the words “O make me glad for every scalding tear,” I prayed, “Make me glad for this scalding situation.” I realized this was an opportunity to rejoice in the unreality of evil, rather than seeing myself as a victim. That broke the spell, and the pain soon left. A couple of hours later the skin on my thigh, which had been red and mottled, returned to perfect normalcy.

In May 2016, while living in another state, I became incapacitated and could barely breathe or swallow. I felt as if there were a great weight on my chest. The devoted Christian Science practitioner I contacted prayed with me faithfully through many days and sleepless nights, as did my daughter. I was very grateful to be able to listen to the weekly Lesson-Sermon from the Christian Science Quarterly.

At a low point, I felt I was passing on, and an aggressive thought came to me almost as if a voice were speaking: “God has forsaken you.” I knew at once what a lie that was! There are many passages in the Bible that tell us to fear not, “for the Lord thy God … will not fail thee, nor forsake thee” (Deuteronomy 31:6). I knew there is no such thing as any place where God is not present, because God is omnipresent Mind. God can never leave us or forsake us, and we can never leave Him.

I gave deep consideration to a statement the practitioner made: “Consciousness can’t be where it isn’t.” Since divine Mind is infinite Spirit, divine consciousness doesn’t dwell in the limitations or restrictions of a material body. Mind knows only its own infinitude and eternality, and as God’s spiritual idea, I knew I could be conscious only of what Mind knows. My realization of this was the beginning of a reversal of the symptoms. By the middle of that summer, I was completely healed of the problem and able to eat and breathe normally again.

In January 2017 my right side and arm became paralyzed. I was taken to a Christian Science nursing facility, where I received round-the-clock care. Some years earlier, my daughter and I had unjustly lost our home, and I was still grieving over this when the physical problem came up. In the quiet, supportive atmosphere of that facility, I spent almost every waking moment in study and prayer, and I also had the metaphysical help of a Christian Science practitioner. What lifted me out of the despair I’d been feeling was thinking about how Christ Jesus had triumphed over injustice by forgiving those who had betrayed him and trusting humbly in God’s disposal of events. His inspiring example completely removed the sense of burden I had been feeling.

After three weeks, I was well on my way to recovery and able to leave the Christian Science nursing facility; my right side was fully functioning again except for my right hand. After another two weeks, I regained complete use of that hand. And not long after this healing, a way unfolded for my daughter and me to return to our home state.

I’m deeply grateful for all I have learned about God, good, through my study of Christian Science, and the healing proofs I’ve had of His tender, omnipresent love and care. 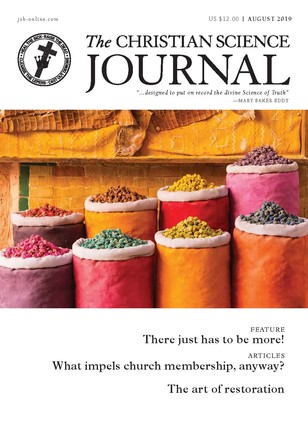 How much of this magazine do I need to read?

There just has to be more!

The office of spiritual healing

‘His arm encircles me, and mine, and all’

The art of restoration

Understanding Mary Baker Eddy in her ‘true light and life’

Grateful for a lifetime of healings

Healed on a remote mountain

How can I talk to ‘smart people’ about God?

Standing up for yourself

‘I am not impressed’

from the Christian Science Board of Lectureship | August 2019