ONE SUMMER EVENING I was out riding my bicycle with my husband when my front tire got stuck in a crevice in the road, and I was thrown quite forcefully onto the street. My husband tried to help me up, but I wasn't able to move one of my legs.

I began to pray silently, declaring that I was God's own image and likeness (Gen. 1:26). I reasoned that as God's image, my being is spiritual, indestructible. And I remembered a hymn that I love. The first verse reads:

In atmosphere of Love divine,
We live, and move, and breathe;
Though mortal eyes may see it not
'Tis sense that would deceive.

I knew that the five material senses always tempt us into thinking that we're mortal and subject to disease and injury. But only spiritual sense can convey what's true—that as God's image, we are created and maintained in perfection. And this spiritual sense was telling me that my being was entirely spiritual. Nothing could injure it. In this atmosphere of divine Love in which I live, I can only move without falling from God's loving care. I then began thinking about something Mary Baker Eddy said about accidents: "Accidents are unknown to God, or immortal Mind, and we must leave the mortal basis of belief and unite with the one Mind, in order to change the notion of chance to the proper sense of God's unerring direction and thus bring out harmony.

"Under divine Providence there can be no accidents, since there is no room for imperfection in perfection" (Science and Health with key to the Scriptures, p. 424).

A woman driving by who had seen the incident called emergency services. An ambulance came soon afterward. Right away I told the paramedics that I was a Christian Scientist, that I had been healed quickly through prayer many times before, and that I wanted to trust God alone for healing again in this instance. For this reason, I declined medical treatment. But because of my serious condition, I was nevertheless taken to a nearby hospital. On the way there, I felt no fear and was very  grateful for the awareness that God was with me and everyone concerned. My husband was able to reach a Christian Science practitioner by phone, and the practitioner agreed to pray for me right away.

The emergency-room doctor wanted to hospitalize me after X-rays determined that I had a broken pelvic bone. As I lay there, I remembered a verse from Psalms, "He keepeth all his bones: not one of them is broken" (34:20). As a metaphysician, I've learned to resolve "things into thoughts," and exchange "the objects of sense for the ideas of Soul" (Science and Health, P.269). I reasoned that since bones represent the spiritual qualities of the thought behind them, such as strength and support, they could not be broken. This was the true substance—the divine substances of Spirit—that I reflected as the very image of Spirit.

I explained to the doctor that because I had always relied on Christian Science prayer for healing, with good results, I would prefer to be in a Christian Science care facility. After signing the hospital's release papers, I was transported by ambulance to such a facility. When I arrived, I was met by skilled and loving Christian Science nurses who got me settled into a bed. I had such a sense of peace knowing that while the nurses would be gently caring for my physical needs, they would be praying too, seeing only my spiritual perfection, in the same way that Jesus saw those whom he healed (see Science and Health, PP. 476-477).

Because I was unable to sleep that first night, I asked the nurse to bring me the Bible, some of Mrs. Eddy's writings, and cassette tapes with Christian Science hymns. These inspired me and eliminated my fear. I had to call the practitioner only once that night, and the pain quickly disappeared. The practitioner and I were both praying to know that since my only substance was spiritual, I could not be affected by matter because it could have no sensation on its own. I found this passage in Science and Health helpful: "The belief that life and sensation are in the body should be overcome by the understanding of what constitutes man as the image of God" (P. 289).

Each day I studied the Weekly Bible Lesson (found in the Christian Science Quarterly) and endeavored to keep my thought aligned with what I knew to be true of God and His perfect, spiritual creation, which included everyone, everywhere. And most of the time, I was pain free.

After three days I rejoiced when I could move my leg again, proof that healing was going on. It wasn't long before I was sitting up in a chair, and in a few days I was walking with a walker. After a week and a half, I was released to go home on a walker. A week later I was walking completely on my own, with no assistance of any kind.

The healing was so complete that two weeks after I arrived home I was able to go through a Christian Science nursing class. After two weeks of classes, the students were expected to begin to do some light nursing by making beds, helping to serve meals, and working on the nursing floor for a few hours each day. I was able to keep up with the others in our class with little discomfort. When the academic year began, I went back to my teaching job at a local school and did light nursing in the evening two nights a week with complete freedom of movement.

It has been nine years since this healing. I jog at least a mile every day and bike frequently with no trouble of any kind. I am most grateful to God for this wonderful proof of His loving care. 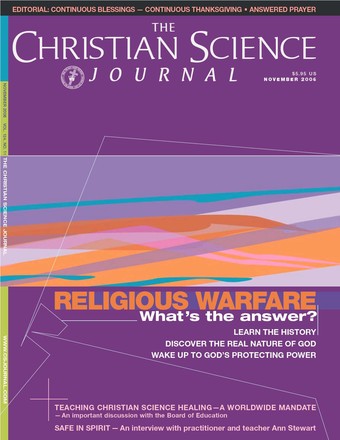 Lessons in turning the other cheek

STRIPPING OFF THE DISGUISE OF EVIL

DISCOVER THE REAL NATURE OF GOD

WAKE UP TO GOD'S PROTECTING POWER