The Cross and Crown has long been used on Mary Baker Eddy's writings and the Christian Science periodicals to indicate the authenticity of these products. The Cross and Crown symbolizes the united focus on healing that branches and church members have with The Mother Church and with each other, and this unity is a result of members and branches, individually and collectively, committing to practice Jesus' four imperative statements, which appear in the circular band around the Cross and Crown.

In order to represent this broader meaning of church, healing, and unity, the Board of Directors announced in January 2007 that limited licensing of the Crown and Crown seal would begin. It is hoped that as the Cross and Crown trademark is more widely used in appropriate ways, it will be seen by others as an identifying and unifying emblem of our Church.

The Board of Directors reviews and makes the determination on each use. Generally, the Board grants permission for exterior and interior branch church, society, or Reading Room signage, ads, membership applications, etc.

The Board will consider requests for other uses. However, it cannot grant requests for use on business cards, stationery, websites, or other promotional material of Journal-advertising Christian Science practitioners and nurses, or for use by institutions or activities for Christian Scientists that are not officially affiliated with The Mother Church (nursing facilities, schools, camps, etc.).

Mother Church Reading Room Librarian Margee Lyon and her staff had been prayerfully considering the Board of Directors' emphasis on church, unity, and healing. They prayed about how this focus relates to their community and Reading Room.

As a result, they felt it was time to make the Cross and Crown symbol more prominent in the Reading Room. Staff member Cynthia Tyler developed a window design incorporating the emblem. It includes the question, "What does it take to be a healer?" and highlights qualities it takes (sincerity, selflessness, gratitude, and so forth) to heal. These words spiral around the question and lead over to the next window and the Cross and Crown.

Margee reports that first-time visitors are coming in to ask about the trademark and about healing. "I've watched people point at the Cross and Crown, talk with each other, and then come in. They are asking about healing. They are sincere in their desire to learn how to bring healing into their lives and the lives of others."

First Church of Christ, Scientist, Willimantic, Connecticut, recently moved its church and Reading Room to a new location. Librarian Char Lee Jason reports that they have had more activity since installing an awning with the Cross and Crown. "This new sign signifies that we are part of a larger organization, one that demonstrates healing."

The members had not even considered awnings. However, when their architect proposed them, members immediately felt they wanted them—and the main reason was because of the Cross and Crown.

Member Margaret Pinkham adds, "It [the Cross and Crown] says Christian Science more than any mere words could. With the symbol, they spell out Christian Science loud and clear. That seal is special, and wherever you see it, you know that, and I honestly believe everyone else does also, whether they realize it or not."

Information on making requests is available on The Mother Church website, www.churchofchristscientist.org. Questions may be directed to the Trademark Administrator by e-mail at trademark@csps.com or by mail at The First Church of Christ, Scientist, One Norway Street, L03–12, Boston, MA 02115, Attention: Trademark Administrator. Although we will respond as quickly as possible, please allow four to eight weeks for processing.

As stated in the January 2007 Journal, an administrative fee of US $45 will be charged for each requested use.

This fee applies for all requests made by September 30, 2007. (Use outside the United States may have special requirements and additional fees because of varying laws regarding trademark licensing.)

Beginning October 1, 2007, to help defray costs associated with this permission process, the fees will be adjusted to:

Advertisements for branch or college organization services, meetings or lectures, e.g., newspapers, flyers. (Licenses for these uses will be valid for one year. A new lecture ad requires a new request. However, republication of an identical advertisement for church services does not require an additional permission unless there are changes in the ad design.)

Fees for uses not listed may vary. 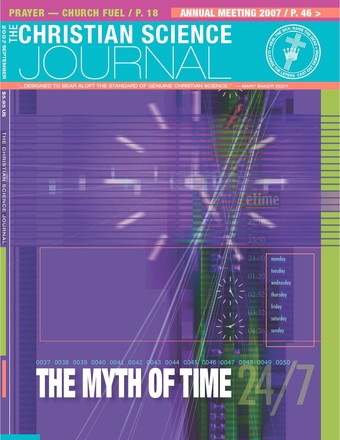 The Music of Soul

Update: Limited Licensing of the Cross and Crown Seal