IN 2006, I woke on the first morning of a weeklong business trip to Japan in great pain with a severely swollen leg. I had been raised in Christian Science, but had stopped attending church about 15 years earlier. In the ensuing years, I developed what I called "mental toughness" to get through challenging situations. In this case, I managed to limp through the trip. However, the symptoms did not improve.

As I continued limping over the next number of weeks, my wife, who is not a Christian Scientist, was hearing increasingly distressful "diagnoses" about my condition from well-meaning friends and relatives. Her concern grew.

Finally, after two months had gone by, my wife put me on notice: either I would get better or we would visit a doctor's office at the end of the week. I agreed, hoping the condition would resolve itself. But when I was still unable to walk without limping, we went to the hospital.

The doctor who examined my leg sent me for emergency testing. Following the tests, he stated that I had a blood clot in my left leg and was "lucky to be alive." He felt that he could probably manage the condition, but also stated I'd need medical care for the rest of my life. He prescribed a treatment regimen and arranged a series of appointments at a nearby clinic that specialized in this condition.

My wife and I were terrified. For me, it was also a call to action. I decided not to use the medication, and I cancelled the appointments at the clinic. I told my wife I wanted to rely on Christian Science. She agreed to support me with prayer.

I literally had to dust off my Bible and Science and Health. I then went to a Christian Science Reading Room and bought a copy of the Journal, where I found the name of a nearby Christian Science practitioner in the directory. I called her and asked her to pray with me and particularly to help me with the great fear that dominated my thoughts. One of the passages she shared that would serve as a cornerstone of my prayer and study going forward was, "A spiritual idea has not a single element of error, and this truth removes properly whatever is offensive" (Science and Health, p. 463).

As I really dug in prayerfully, I started to see that my mental toughness was really self-will. I realized I needed to humbly relinquish a rugged dependence on material determination and willpower and turn wholeheartedly to God—to seek and accept His care. I spent many hours quietly praying to feel God's presence. Several times I prayed through most of the night. It was difficult at first. But through praying and listening, God's love became real to me, and this renewed connection to God's presence encouraged me to pray even more deeply.

My wife and I discussed several passages in the Bible, and devoted ourselves to gaining a better understanding of God's care in our lives. We especially found comfort in the Bible passage, "In him we live, and move, and have our being" (Acts 17:28), which helped both of us feel embraced in His allness.

I strove to discern the spiritual fact that all of my movement, including walking, was in Him. And because we are subject only to God, Spirit, I affirmed that neither disease nor physical limitation could hold sway in my life. My ability to recognize God's presence became more and more certain and required less effort. I saw that I had never left His care. As that realization strengthened, my fear lessened.

Within a week, I was walking without limping. The pain had disappeared, though some swelling continued for several weeks.

During this time, I received a letter from the doctor who had examined me, reminding me that I had a "life-threatening problem," and urging me to continue the prescribed medical treatment. He also suggested the possibility of a relapse.

I again called the practitioner for help through prayer. We talked about the definition of substance in Science and Health, which states in part, "Substance is that which is eternal and incapable of discord and decay" (p. 468). She assured me that in God's loving care, my true substance—every aspect of my being—was spiritual and unchanging. On that basis, there could be no possibility of a relapse.

The practitioner also encouraged me to explore this passage in Isaiah: "How beautiful upon the mountains are the feet of him that bringeth good tidings, that publisheth peace; that bringeth good tidings of good, that publisheth salvation; that saith unto Zion, Thy God reigneth!" (52:7). As I pondered each phrase, the truth that God's control of His universe is harmonious and complete filled my thoughts. My feet became more firmly planted in the understanding that His strength and care were upholding me.

I also began to see my business career in more spiritual terms and realized that instead of just pushing forward from one experience to the next, I could act confidently from the standpoint of accepting God's wisdom, provision, and guidance. As I saw more clearly that everyone in God's creation has a unique purpose and the ability to fulfill it, I realized there was no need to be resigned to any discouraging sense of competition.

Over the next several days, I gained a wonderful sense of peace. My fear disappeared completely, and at the same time, the swelling in my leg subsided.

Since the time this healing occurred a year ago, I've returned to all my normal activities with total freedom. I've completed several trips to both Asia and Europe without any difficulties. I've also resumed my hobby of running several times each week, and recently took part in a 5–kilometer event.

Above all, I am grateful to be back on a spiritual path. I've joined a local branch Church of Christ, Scientist, and look forward to continued spiritual progress through my study of Christian Science and participation in church activities. 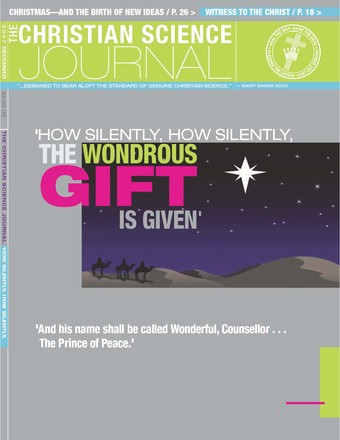 No Burden, No Baggage

WITNESS TO THE CHRIST

Christmas—and the birth of new ideas

THOUGHT AND HEALTH—WHAT'S THE CONNECTION?

GOD, CONVERSATION, AND 'THE TWO TOMS'