I learned something of how prayer can protect us during the early 1970s when I lived in Belfast, Northern Ireland, during the height of what was to become a thirty-year sectarian, political conflict known as the Troubles. During this time over 3,600 people were killed, and many bombs, too many to count, were exploded. As a store owner in Belfast, my stores suffered damage a number of times from bombings.

One day my business partner came into my office ashen-faced. He told me he had just received a phone call threatening his life and stating that terrorists were going to close our business down. Politicians and business people—friends of ours—had already been murdered by the IRA (Irish Republican Army), one of several terrorist organizations in Northern Ireland at this time. My business partner was visibly upset. He said, “What are we to do?”

“I don’t know,” I replied. He decided to take his wife and three children and leave the country.

A short time later I was accosted outside my office by two young men with guns. I thought: “Is this it? Am I to be shot?”

Right then, two innocent civilians walked around the corner. I thought of them almost as angels because the gunmen ran off shouting, “You have been warned; we’re going to get you!”

I got into my car and drove home. Many were the fearful thoughts on that drive. But when I got home I took out my Bible and the textbook of Christian Science, Science and Health with Key to the Scriptures by Mary Baker Eddy. I opened the Bible to Isaiah 41:10 and read: “Fear thou not; for I am with thee: be not dismayed; for I am thy God: I will strengthen thee; yea, I will help thee; yea, I will uphold thee with the right hand of my righteousness.”

I read and reread that passage until I felt a grain of comfort, a slight lessening of fear. But at the same time I was wondering if I should take my wife and three children and leave the country, as my business partner had done.

I was again confronted by a young man with a gun, but this time I was prepared. I had on, mentally, what might be called spiritual armor.

In the Bible we read about war and terrorism, but we also read about men and women being rescued and saved from dire circumstances, as well as being healed of disease, by turning to God in prayer. I thought about the story of Daniel in the lions’ den, and how God had shut the mouths of the lions so that Daniel was safe (see Daniel, chap. 6).

I read the ninety-first Psalm and noticed how applicable it is to refuting terrorism. It begins, “He that dwelleth in the secret place of the most High shall abide under the shadow of the Almighty” (verse 1). I thought about the word dwelleth. It spoke to me of security, protection, shelter, belonging. I felt a little comforted, and especially reassuring were the words not to be fearful “for the terror by night; nor for the arrow that flieth by day” (verse 5).

I lived with these prayers. I looked up more references to war, conflict, and violence in the Bible. In Isaiah we read, “No weapon that is formed against thee shall prosper” (54:17). In Second Corinthians: “For the weapons of our warfare are not carnal, but mighty through God to the pulling down of strong holds” (10:4).

I also read in Science and Health, “By looking a tiger fearlessly in the eye, Sir Charles Napier sent it cowering back into the jungle” (p. 378). This spoke to me of standing up to fear, including even taking a strong mental stand against terrorism as a power. God, omnipotent Mind, is the only real power governing our lives.

I decided I would not give in to the violent campaign to destroy businesses and ruin the country. I would not give up and leave. No matter how long it might take, I decided, I would never let terrorism win. I went about my business in the normal way, even opening several more new shops and two factories, giving some much-needed employment opportunities to the local population.

Some years later I was again confronted by a young man with a gun, but this time I was prepared. I had on, mentally, what might be called spiritual armor. As he was waving my car to a stop, I was thinking about the words of Mrs. Eddy: “Jesus beheld in Science the perfect man, who appeared to him where sinning mortal man appears to mortals. In this perfect man the Saviour saw God’s own likeness, and this correct view of man healed the sick” (Science and Health, pp. 476–477).

I tried to see this young man not as violent and belligerent, but in his real, true, and good nature as a child of God, the innocent idea of divine Mind. I tried to see the Christliness of his true selfhood.

As I strove to do this, I found that I felt completely unafraid. I had a feeling of peace, a sense of compassion, even of love. I rolled down the car window. The young man still had the gun pointing at me. I think I actually smiled at him. He looked at me strangely and appeared confused. He then thrust the gun into his long black coat. Then, after shouting at the other young men with him, they all just ran off, and I was able to proceed.

By seeing everyone as a spiritual idea of God, by loving even our enemies as Christ Jesus commanded us to do, we begin to see evidence of the Christ, Truth, putting a stop to terrorism.

That night I prayed to have a higher understanding of that young man and the others who were with him, declaring they were the harmless ideas of infinite Mind, of divine Love. In reality, as children of God, they could do no harm to others or be harmed by themselves. I checked the media the following morning: No terrorist incidents were reported from the previous evening.

I have an acronym I sometimes write on the palm of my hand: “STCIE.” It stands for, “See the Christ in everyone”—meaning, see everyone’s true, Christly identity as God’s image. This reminder helps me in praying to dismantle terrorism, and it brings me a sense of peace.

By seeing everyone as a spiritual idea of God, by loving even our enemies as Christ Jesus commanded us to do, we begin to see evidence of the Christ, Truth, putting a stop to terrorism, vanquishing corruption, and giving rise to the expression of greater morals and ethics among humankind. Lies and false doctrine yield to the law of Truth. This law of Truth, God, has the effect of banishing radicalization and extremism from human consciousness and replacing it with brotherly love.

Real holiness, real devotion, is not expressed in violence or fear of violence, but in the redemption and regeneration of human thought. A spiritual transformation of our thoughts brings us an understanding of the presence of God’s order, harmony, and peace—the perfection of God and man—until finally a grand song of praise will be raised to God, and error’s voice silenced forever.

If we can love our fellow man in Christ’s way, if we can forgive others regardless of cultural or religious divides, and regardless of whatever evil may have been foisted on us, then we are contributing to world peace.

In 1987 a friend of mine, Gordon Wilson, and his daughter Marie, were standing at the Cenotaph in Enniskillen in Northern Ireland, where they were attending an annual religious service to commemorate the fallen in the two world wars. The IRA exploded a bomb, killing Marie and ten others, and wounding 68 people. The world’s press descended on Enniskillen and interviewed Gordon in his hospital bed. He said: “I have lost my daughter, and we shall miss her. But I bear no ill will. I bear no grudge.” And he added, “I shall pray for those men tonight and every night.”

His words of forgiveness echoed around the world. Queen Elizabeth, in her Christmas message to the United Kingdom, indicated that this was an outstanding example of Christian forgiveness. Gordon spent the remaining years of his life devoted to efforts to bring peace and reconciliation to Ireland.

If we can know that the divine Mind, God, never created a sinner, and that sin is only a lie, this helps us to diminish a sense of anguish and wrath over terrorism. If we can see man as God created him, as His spiritual reflection—peaceful, unselfish, and loving—that is a contribution of good to our society. If we can see that all men have in reality the light of Christ shining within them to guide them, this helps us to heal fear and discord. When we refuse to believe that man, God’s idea, is corrupt or evil, and when we refuse to react to violence with anger, bitterness, or resentment, then we are doing much to dismantle error and forward peace. 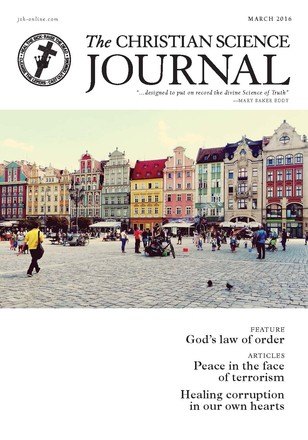 Peace in the face of terrorism

Know the truth; refute the lies

In the presence of Love

Healing corruption in our own hearts

My daily walk and spiritual clarity

Conscious of and steady in the truth

A Reading Room attendant’s prayer for the Monitor

From the Christian Science Board of Directors | March 2016

Living ‘to exemplify our risen Lord’