I felt like I lived in a cavern deep in the earth without any light. It was the late 1980s, and I was playing out a fast-track career in the movie business. This was my normal routine: partying until 4 a.m., coming home, taking two cold pills with a glass of orange juice, followed by five antacid wafers before passing out.

My wife experienced two miscarriages, and after a traumatic divorce, I was chased into the darkness by serious addictions to alcohol and drugs. I used whatever controlled substance I could find except cocaine (too expensive) and acid (too scary). My dependency truly embodied the dictionary's definition of a tyrant: "Absolute ruler unrestrained by law—a harsh user of power"—and it ruled every facet of my life.

Despite all this, I thought I was fooling everyone into thinking I was keeping it all together. I was successful at work, popular with friends and colleagues, and seemed happy on the outside. But I was only fooling myself. Everyone knew I was in trouble. Nothing made sense anymore, and I attempted suicide.

Then a Jewish woman I knew through work gave me a copy of Science and Health. A friend had introduced her to the book a year before, and she told me that studying it had greatly improved her life—not only were physical challenges healed, but she gained a sense of joy she'd never known before. Honestly, the last thing I wanted was a better life. I just wanted to end what had become a miserable existence.

It's not as if I hadn't made attempts to save myself. I studied many religions and philosophies over the years, and though each one contained some element of truth, nothing was potent enough to make any impact. So when I was handed Science and Health, I was skeptical, expecting another failed attempt to explain what I considered the inexplicable—namely, a way to make my life right and a reason to go on. I also sought out support groups for alcoholics and addicts. But they didn't work for me either, because they required that I stand up at meetings and say that I was—and always would be—an addict. Maybe a recovering addict, but nonetheless one for life. I desperately longed for some other identity, one that would set me completely free from addictive thinking.

After two years of excuses and more attempts at suicide, I agreed to read Science and Health, if only to show where it failed. But as I read, something else happened. I found a system of ideas that actually broke through the walls of resistance and denial I had built over the years. I learned that disease of any kind is mental, and that healing comes only when we turn our thought wholeheartedly to God. I also learned that God's healing power is as much present today as it was in Jesus' time. Instead of seeing disease as real, I saw that we can—just as Jesus did—behold each one's spotless, spiritual status. That included my own.

I became so absorbed in what I was learning about who I really was that I almost forgot about doing drugs and alcohol. That's the only way I can explain it. Even so, I still had a lingering fear that alcohol could have power over me. Some time after I began studying Christian Science, I was at an important industry party with new clients, and everyone wanted me to try a new drink they had just concocted. I knew they were asking me to be the first one to try it because they were uncomfortable that I'd been drinking ginger ale all night, when for years I was known to be the lead party animal. But along with coming to see that consciousness-altering substances had no claim on me, I was finding out that peer pressure didn't either. I realized I didn't need to be self-conscious about a "self" I never was to begin with. My spiritual identity was intact, which meant nothing good could be taken from me. I could be social and have fun without being dependent on any other source but God.

Seeing ourselves from the standpoint of our spiritual status, guided only by Him, leaves no room for any other Mind but His.

I went from believing that alcohol and drugs were necessary to make life bearable, to understanding God, who is Life itself, is, as Science and Health explains, "the centre and circumference" of my very being. And that this Life goes way beyond bearable—this Life could actually be joyful. And this existence was more than actually possible—it was my inheritance. I reminded myself daily that I was His creation and could only reflect what He was—Love, Truth, Spirit. I grew to love this statement in Science and Health: "I hope, dear reader, I am leading you into the understanding of your divine rights, your heaven-bestowed harmony,—that, as you read, you see there is no cause (outside of erring, mortal, material sense which is not power) able to make you sick or sinful; and I hope that you are conquering this false sense" (p. 253).

Starting from any other standpoint but God is this "false sense," and it's what gives addiction its false control. Not only making us think these addictions are an integral part of who we are, but convincing us we actually can't live without them. But seeing ourselves from the standpoint of our spiritual status, guided only by Him, leaves no room for any other Mind but His. Healing is assured by a transformation of thought, not by tinkering with the material circumstances or conditions.

Along with Science and Health, the Bible underscores our one-on-one relationship with God. We can be assured of how much He/She loves us by God's promises of forgiveness and healing: "Thus saith the Lord, the God of David thy father, I have heard thy prayer, I have seen thy tears: behold, I will heal thee" (II Kings 20:5), and "For thou, Lord, art good, and ready to forgive; and plenteous in mercy unto all them that call upon thee" (Ps. 86:5). We're even shown that God takes great delight in us: "Since thou wast precious in my sight, thou hast been honourable, and I have loved thee" (Isa. 43:4). To the guilt-ridden addict, this is breaking news—that we are, and always have been, precious in God's eyes.

But this healing I experienced had one more chapter. More recently I needed to face down final tyrant in my life: overeating. I knew by now that addiction is a way of thinking, and I saw some of the same patterns from those dark years—the self-justification, the denial, the seeking of comfort where in reality there is none. None of these schemes had anything to do with my real self. Anytime I was pulled in the direction of satisfying myself with food, I knew I had an opportunity to reclaim my spiritual status, attracted only to the ideas that God gives me. In two years, the overeating habit was gone, and I was back to a normal weight—completely healed.

I'm no longer pushed around by the tyrants of drugs, alcohol, suicidal thoughts, overeating, and smoking. These days I spend my time as a Christian Science practitioner, helping others overcome their own tyrants. False power is no power, and acknowledging our Maker as the only power is also our only legitimate power. Being substance-free is knowing where true substance lies—in God, the only true source of attraction.

Oft to every man and nation
Comes the moment to decide,
In the strife of Truth with falsehood,
For the good or evil side.

A great cause, God's new Messiah,
Shows to each the bloom or blight,
So can choice be made by all men
Twixt the darkness and the light.

New occasions teach new duties,
Time makes ancient creeds uncouth;
They must upward still and onward
Who would keep abreast of Truth,
And serenely down the future
See the thought of men incline
To the side of perfect justice
And to God's supreme design.

Though the cause of evil prosper,
Yet 'tis Truth alone is strong;
Though her portion be the scaffold,
And upon the throne be wrong,
Yet that scaffold sways the future,
And behind the dim unknown
Standeth God within the shadow
Keeping watch above His own.

Brian Clendenen is a Christian Science practitioner. He lives in Minnetonka, Minnesota. 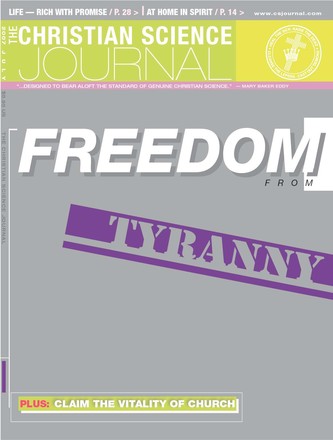 Growing Church—From the Inside Out

AT HOME IN SPIRIT

IS THE CAMEL IN YOUR TENT?

By MARIA DÍAZ with contributions from CHARYS TORRES | July 2007

ST. JOHN THE DIVINE DESCRIBED HIS VISION OF HEAVEN THIS WAY...

A HIGHER VISION OF GOVERNMENT

ALWAYS A WAY OUT

EXPOSING THE FALSE NATURE OF DISEASE

LOOSED FROM THE GRIP OF ADDICTION