Under the thought-provoking marginal heading "Seeming and being" Mary Baker Eddy, the Discoverer and Founder of Christian Science, writes in the textbook, "Science and Health with Key to the Scriptures" (p. 123), "The verity of Mind shows conclusively how it is that matter seems to be, but is not." And she continues, "Divine Science, rising above physical theories, excludes matter, resolves things into thoughts, and replaces the objects of material sense with spiritual ideas." In these three steps our Leader shows us the way of escape from materiality.

Christian Science elevates being to Mind. It presents as demonstrable Science the revelation that God is Mind, hence that all is Mind and its manifestation. Because there is but one God, there is but one Mind, one immortal consciousness. This Mind is the eternal Ego. It alone declares I AM, and all creation sends back the joyous strain. Man is not a separate, finite entity. His individuality, his being, his identity, are embraced in Mind, in the conscious harmony of Soul.

Mind, the only I or Us, reflects itself and is not subdivided. The Ego is not surrounded by a host of lesser egos. Idea has no inherent ability to say, "I am a reflection," but Mind, in the completeness of its grandeur, holds every idea distinct and imperishable within itself. This unseverable oneness of Principle and its idea is the emancipating Christ, Truth. All conscious being is eternal, for the I AM never stops declaring itself, and man has no consciousness but God. He forever shows forth the harmony of being in health, wisdom, intelligence, grace, beauty, bounty, vigor, and strength.

These great spiritual facts shine in the darkness of mortal belief. But mortal belief, accepting the seeming, denies them. The world believes in many egos, and confusion, rivalry, strife, and war are the outcome.

As the recognition of the fatherhood of God dawns in human thought, all men are seen as brethren. But Christian Science establishes the brotherhood of man on the basis of God as the only Ego. It excludes matter, showing it to be but a misstatement of Mind.

Mrs. Eddy says in "The First Church of Christ, Scientist, and Miscellany" (p. 167), "The suppositional world within us separates us from the spiritual world, which is apart from matter, and unites us to one another." This "suppositional world within us" is all that appears to be material, restricted, imperfect; it alone experiences disaster, disease, sin, and death. Paul gives us the remedy. He says (Phil. 2:5), "Let this mind be in you, which was also in Christ Jesus." Let it!

Thus Science translates things into thoughts. It replaces the objects of sense with spiritual ideas and reveals creation intact and perfect in the Mind, or consciousness, which is God.

Now, how do we make this practical? How can we prove this? First, we must completely reverse our point of view. Instead of trying to heal a physical body or change a material condition, we must turn the searchlight of Truth within. If we are having only the Mind which is divine and are not accepting any other, can we be conscious of discord, disaster, accident, defeat? Can perfect Mind experience these? Then if we seem to see these in our experience or in another's where does the healing lie? Not in changing an outward condition, but in putting on the Mind of Christ.

It is well to ask oneself in every situation, Is this seeming or is it being? Mrs. Eddy makes it clear throughout her writings that the effort to heal matter or to change matter through Mind is mental quackery. Matter, whatever form it assumes, is a mirage, an illusion. Christian Science healing destroys false belief, and in so doing it changes the seeming condition. The only real condition of being is Mind, forever expressing its own harmony, perpetuity, and perfection. This is life everlasting, of which the Master said (John 17:3), "this is life eternal, that they might know thee the only true God, and Jesus Christ, whom thou hast sent."

The seeming is that the grass withers, the flower fades, the body dies; but the fact is that being is immortal. The Mind of Christ is not deceived. Christian Science reduces to nothingness the aggressive suggestion of any power, presence, or life separate from divinity.

Referring to Paul's declaration (II Cor. 12:10), "I take pleasure in infirmities, . . . in necessities, in persecutions," Mrs. Eddy gives this arresting definition of matter on page 201 of "Miscellaneous Writings." She says, "The Science of Paul's declaration resolves the element misnamed matter into its original sin, or human will; that will which would oppose bringing the qualities of Spirit into subjection to Spirit."

Is not the belief of matter perpetually opposing the bringing of the qualities of Spirit into subjection to Spirit? Energy, vigor, strength, health, endurance, and so on, are qualities of Spirit; yet mortal belief would say that they are qualities of matter, that they spring from matter and depend upon matter; that the amount of energy we have, for example, depends upon our physical condition, our general well-being, our age, and so on; and even that man himself is the offspring of human will. Physical science claims to have reduced matter to energy—but energy is a quality of Spirit! Science "resolves the element misnamed matter into its original sin, or human will" and thus proves its nothingness. And in so doing, Science brings the qualities of Spirit into subjection to Spirit, and we learn that energy, life, health, vigor, strength, belong to Spirit and are ours by reflection, intact and unassailable.

Now let us see how Jesus demonstrated these points. It is important to recall that the times he lived in were to the people of his day as troublous and perplexing as the times we are living in. The Roman Empire had spread over much of the civilized world, and all of Palestine was under its yoke. The Judaic religion had degenerated into a materialistic system wholly antagonistic to the Christ and to the concept of God as Spirit. Yet Jesus came proclaiming, "The kingdom of God is within you" (Luke 17: 21), and he taught and preached and healed in defiance of hatred and opposition.

Jesus never accepted the seeming. He acknowledged being and nothing else. Jesus was not merely a very good man, in a human sense. His goodness was the direct expression of the good that is God. Thus it transcended the human concept of good. Good to him was divinely natural; error, or evil, was unnatural. The power of his goodness was the omnipotence of Spirit. His absolute obedience to the First Commandment gave him dominion over every adverse circumstance and condition. He was so completely identified with the Christ, Truth, that when he spoke, the power of Truth was instantly manifested. This power fed the multitudes, healed the sick, raised the dead, and stilled the storm. To him, matter was neither substance nor condition, but simply qualities of thought, opposed to Spirit, which fled before his clear conviction of the supremacy of Love.

The divine Science, or Christ, which was Jesus' real being, excluded matter by resolving it into its native element, human will or mortal mind, and replaced the objects of sense with spiritual ideas in all their immediacy and might. Jesus was the Way-shower, showing you and me the way of escape from physicality and human bondage. He never ignored evil. He destroyed it. Ever and anon he proved the effortless grandeur of Spirit and found refuge in Soul. Every form of disease and discord was unnatural to him, while health and harmony were natural and spontaneous.

Science enables us to follow the demonstration of the Master, to put on the Mind of Christ, and to be, like him, undeceived by the seeming as we claim the freedom and joy of spiritual being.

As we experience this marvel of release from the bondage of matter, the heart goes out in gratitude to the one through whom the revelation has come in this age. No longer do we think of her merely as a human person who was pure enough and good enough to discover this wonder of being. The time was fulfilled. The revelation appeared, and humanity perceived it as coming through the woman, Mary Baker Eddy. Thus we look beyond the person and measure her in terms of the beauty and magnitude of Science itself. It was her holy adherence to Principle, her unselfed love, and her devotion to Christ, which are today enabling you and me to reject the seeming of sense and demonstrate the dominion of being. 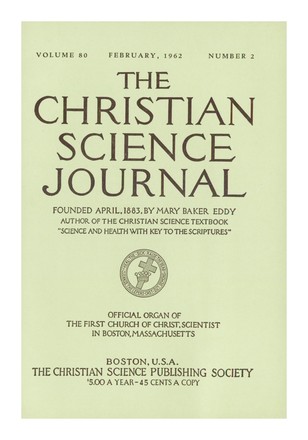 "THE DESERT SHALL REJOICE"

THE CHARACTER OF THE CHRIST

THE ART OF READING

"But one thing is needful"

THE "RICHES OF HIS GRACE"

THE HEALING OF THE SUBCONSCIOUS

CHRISTIAN SCIENTISTS DO NOT IGNORE EVIL

THE SIMPLICITY OF CHRISTIAN SCIENCE HEALING

"STRONGER SHOULD BE OUR FAITH"