THROUGH THE CENTURIES, exceptional thinkers such as Rene Descartes and George Berkeley have posited their belief in the unreality of matter, but none so boldly as Mary Baker Eddy when she stated, "There is no life, truth, intelligence, nor substance in matter" (Science and Health with Key to the Scriptures, p. 468).

A little over a year ago, I found myself wrestling with this very question—Do life and substance exist in matter? I'd awakened one morning to find that one of my legs was covered with bumps—similar to hives, but worse. Over the next several days, red patches started to form, and my leg swelled up. Three other family members had faced challenges with similar symptoms, with very serious effects. Heredity loomed in my mind as a fearful specter. Thoughts hammered, Are you sure disease is not real? The symptoms are pretty alarming. You can't ignore them.

I had learned in Christian Science, however, that perfect health is our heritage as children of God. We don't have to ask for it or work toward it. It's ours by God's grace. Nothing can reverse or override it. Science and Health assures us, "... Science knows no lapse from nor return to harmony, but holds the divine order or spiritual law, in which God and all that He creates are perfect and eternal, to have remained unchanged in its eternal history" (p. 471). In humble prayer, I declared that I was as whole and free now as I had ever been. I affirmed that I was standing on Truth, the foundation of Love, which did not include disease in any shape or form. My support was also in the good qualities that comprise my true inheritance, such as uprightness, purity, and strength.

Continued prayer about this situation enabled me to see that I didn't need to let the condition dictate what I could or couldn't do. So the next day I went to work—having gotten dressed without checking my leg, though I had some difficulty getting my foot into my shoe. Throughout the day, I was able to do everything as normal, including climbing stairs and moving furniture. One evening the following week, my husband and I even dressed up and attended the opera. I noticed that my business, too, had been benefited because of this steadfast focus on my relationship to an all-powerful, all-loving God. Despite the material evidence, I felt confident and strong.

However, my leg still itched and ached, and though I'd resolved not to monitor its physical appearance, I inadvertently saw my leg when I was undressing for bed one night. Instead of getting better, the infection had spread. Which is true? I asked myself, the progress and freedom I feel by acknowledging what I know to be spiritually true, or the litany of falsehoods posed by the material evidence of a diseased leg? I remembered the Bible passage, "Let God be true, but every man a liar" (Rom. 3:4). To me, this meant that every discordant material condition is a lie; only what God knows about us is true. So, again, I decided to side with God. I had no intention of being the victim of a lie. With God I could be the victor.

A practitioner whom I called for prayerful help quoted a passage by Mary Baker Eddy: "This false sense of substance must yield to His eternal presence, and so dissolve" (Unity of Good, p. 60). The practitioner pointed out that what appeared to be a diseased condition is actually only a mental suggestion—it was merely a shadow on my consciousness, and all that was needed to remove it was the light of spiritual truth. Not drugs or medicines or time—but the facts of divine Life. She reminded me that just as a shadow cannot be removed by scrubbing, painting over it, or chipping away at it, only light can dispel it, and so too, a false belief can be removed only with the light that God sends us through the thoughts He imparts to us—His "angel messages." I felt so supported by the understanding that God is constantly communicating the ideas we need—including the truth that discord is unreal. As I gained a clearer realization that the diseased condition was an illusion—because it had to be impossible under God's loving government—I could see it as nothing more than a dissenting but powerless challenge to the voice of Truth.

Two weeks later we were visiting family for Thanksgiving. As I got dressed for the Thanksgiving service, I realized that my leg was completely healed. All the "shadows"—the fear, the symptoms, the physical evidence, had vanished. Mary Baker Eddy said, "Christian Science never healed a patient without proving with mathematical certainty that error, when found out, is two-thirds destroyed, and the remaining third kills itself" (Miscellaneous Writings 1883-1896, p. 210). I remember feeling grateful for the freedom I had expressed for so many years in cheerleading, gymnastics, ballet, running, skiing, and mountain climbing. And I knew that the expression of freedom and strength was mine eternally as a child of God. Those qualities could never become diseased nor deteriorate. Divine Spirit had answered my question about matter's unreality with a clear demonstration of health and harmony.

Since this healing, I've asked myself, How can I be certain about the outcome in the face of any serious situation? How do I know I won't "lose" the battle to my opponent, the material senses? And I thought of a movie I saw last year, "The Great Debaters," in which a debate coach reminds his debaters who determines the outcome of every challenge. He asks them four questions and gives them the appropriate responses:

Q: Why is He the judge? A: He decides who wins or loses—not my opponent (the material senses, I added).

Q: Who is your opponent? A: He doesn't exist.

Q: Why doesn't he exist? A: Because he's a mere dissenting voice to the truth I speak. 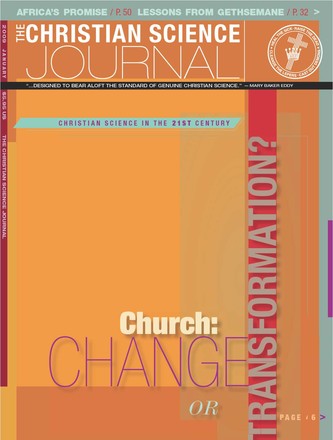 A Church in Transition

Researching the Manual: An Introduction

VIEW FROM DOWN UNDER

ONE DAY A YEAR

2008–2009 THE CHRISTIAN SCIENCE BOARD OF LECTURESHIP