For the first two terms in my first year as a high school student, I was bullied relentlessly. Other boys my age experienced the same difficulties. Students in the upper classes would force us to wash their uniforms, make their beds, tie their shoelaces, and so on. Failure to do this led to a beating. In order to avoid that, I would always do whatever the big boys told me to do. When I enrolled in the school, my mum had told me to keep out of trouble, and I wanted to be obedient.

One Saturday afternoon during game time, I was participating in sports as usual when an older boy ordered me to kneel, then sing our country’s, Kenya’s, national anthem while dancing on my knees. Instead of standing up for me, my fellow teammates just stood there watching. After several minutes of doing what he asked, I couldn’t feel my joints anymore. But when I told the boy as much, he just laughed and told me to go on.

I became so exhausted that I had to lie down, and this made the boy very mad. He picked me up by my collar and slapped me so hard across the face that I couldn’t feel my jaw. I tried to plead with him not to hurt me, and this created a scene. At that point, my fellow schoolmates came to my rescue and I used the chance to run to the dormitory.

The boys in my dorm urged me to seek revenge on the bully, but I disagreed. As a devoted student of Christian Science, I wanted to return “blessing for cursing” as Christ Jesus did (see Mary Baker Eddy, Science and Health with Key to the Scriptures, p. 20). I told my dorm mates that I would try and make friends with this boy instead.

A question came to me: “What about this boy? What might he need?”

Later that night, the boy approached me, making a sign as if he wanted to beat me up. Despite the emotions I was feeling—fear, hurt, and annoyance—I realized immediately that this was an opportunity for me to prove both my own spiritual nature and this boy’s. As God’s children, we could be neither victims nor victimizers, since we are made in God’s image and likeness as it says in the Bible (see Genesis 1:26, 27). Since God is good and creates only good, we, too, must express this goodness. I realized I could reject the emotions of fear and hurt as baseless, since in God’s view of reality, this boy and I must be related harmoniously at all times. And this spiritual view, I’ve learnt, is the only correct view.

As I corrected my thought in this way and allowed only divine inspiration into my consciousness, a question came to me: “What about this boy? What might he need?” Suddenly, my heart reached out to him.

“Did you mean to do it?” I heard myself ask.

Instead of beating me up, he motioned toward a group of boys and told me that he had bullied me because he wanted the boys to see him as a man and allow him to join their group. His isolation and discomfort seemed painfully obvious, and immediately I felt love and compassion pour out of my heart. And yet, this love felt so much bigger than either of us. It felt as though I was appreciating how both of us were the pure expression of divine Love.

As I contemplated this Christly love, I suddenly realized that the pain from the beating had vanished from my body. I was overflowing with gratitude to God for this beautiful proof of His constant, uninterrupted love—a love that is universal and tolerates no rift.

Later, as I thought about this incident, I realized that the love that I’d felt was so pure that it overwhelmed any need for forgiveness. Since I’d glimpsed so clearly that bullying is unknown to God, who sees and maintains His children in His image, always, it dawned on me that, in fact, there was nothing to forgive.

This realization had far-reaching effects. A few days later, this same boy told me that I had completely changed his attitude toward the other boys in our school. He also told me that the group he wanted to join also wanted to change after he’d shared with them what I had told him. We have become friends, and after winning the position of school president, he has focused on eliminating the culture of bullying in our school.

The love of God truly crosses and heals divides of any kind.

TeenConnect on JSH-Online! Find more content by teens and for teens in this new section: JSH-Online.com/TeenConnect. 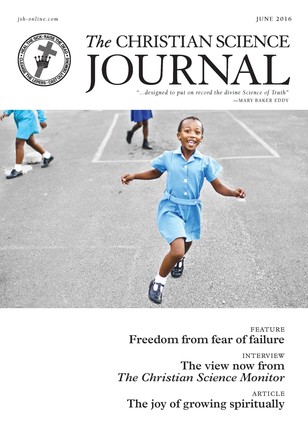 Freedom from fear of failure

The view now from The Christian Science Monitor

The ‘right hand of God’ comes to our defense

The joy of growing spiritually

Our ‘closet’ of heartfelt, healing prayer

From conflict to harmony at church

Why seek less than the kingdom of God?

After a fall, prayer brings freedom

Surgery was no longer needed