Mary Baker Eddy described gratitude as "the highest human quality" and "the sum total of all the graces of Spirit" (A10667 and A10572, The Mary Baker Eddy Collection, The Mary Baker Eddy Library). Her writings frequently cite giving thanks as essential to spiritual growth and healing. Mrs. Eddy felt that gratitude was especially required at times of great need. She once admonished, "Under affliction in the very depths, stop and contemplate what you have to be grateful for." And she continued with some examples, "Think of the redemption of mortals, of the waking from all suffering, from sin itself, all the woes it includes, waking from the unreal dream of life in matter to the reality of Life in God, in infinite goodness, blessedness, Love" (A10572). She asks in Science and Health: "Are we really grateful for the good already received? Then we shall avail ourselves of the blessings we have, and thus be fitted to receive more" (p. 3). Even though times of trial can make us feel like we have little to be grateful for, we can always express thanks for these truths about reality, and these radical expressions of gratitude bring healing.

It is perhaps not surprising then that Mary Baker Eddy created a special Thanksgiving Day service that includes testimonies of healing. Thanksgiving Day makes its appearance in the Manual of the Mother Church in the Appendix under Order of Services (p. 123) and in this installment of our series on the Manual, we will trace the development of this service.

PRECURSORS TO THE THANKSGIVING DAY SERVICE

Mary Baker Eddy held what she called a "thanksgiving service" on November 24, 1878, in the rented Shawmut Baptist Tabernacle Church in Boston. In her sermon she expressed her gratitude for Science and Health's teachings about the omnipresence of God, which was followed by expressions of thanksgiving from the congregation (Reminiscence File of Clara E. Choate, The Mary Baker Eddy Collection).

Some years later, the December 14, 1899 issue of the Christian Science Sentinel carried news items indicating that several branch churches had held a Thanksgiving service as the Wednesday evening testimony meeting prior to Thanksgiving Day. While it is made clear that these were not official Thanksgiving services, they each included testimonies of thanksgiving in keeping with the holiday.

Nearly three years later, Mrs. Eddy wrote a brief statement that appeared in the May 1902 issue of the Journal establishing an official Thanksgiving Day service, "The churches of the Christian Science denomination will hold religious services, on days set apart by our government for religious worship,—such as Thanksgiving, and Fast." (Fast Day was a New Hampshire holiday that had its roots in the old Puritan practice of setting aside a day for public fasting and prayer. Mrs. Eddy had written a message in praise of Fast Day that was published in the Concord Monitor, a New Hampshire paper, and that is reprinted in The First Church of Christ, Scientist, and Miscellany (see pp. 339–341).

THANKSGIVING IN THE MOTHER CHURCH AND BRANCHES

Thanksgiving as a holiday has deep American roots and Mrs. Eddy's motivations in establishing a Thanksgiving service seem to have been in line with the holiday's original purpose: a day of prayer and gratitude. There are several published examples of her sentiments; among them "Our National Thanksgiving Hymn" in Poems (p. 77), originally published in the Lynn Weekly Reporter on December 7, 1865, celebrating the end of the Civil War.

In November of 1900, the Boston Globe wrote to Mrs. Eddy and asked her to write a message to the people of New England about what the last Thanksgiving Day of the nineteenth century should signify (see Miscellany, pp. 264-265). She responded that this day gives opportunity for thanking God for "... Truth and Love made more practical; ..."

Two unique aspects of the order of service for Thanksgiving are the reading of the proclamation and testimonies "appropriate for the occasion."

Mrs. Eddy did not elaborate on her decision to include "Reading the Thanksgiving Proclamation of the President of the United States, or the Governor of the state, or both," but this activity may trace back to her 1902 statement that Churches of Christ, Scientist, would hold services on government-proclaimed religious holidays. We have not been able to determine her motivation for allowing the President's or a governor's or both proclamations to be read, but we suspect the reason may have been that there was no standard date for Thanksgiving until 1941. Before then, a state proclamation sometimes declared a different Thursday than the national proclamation. Allowing for both proclamations in the Thanksgiving Day service would permit reading a proclamation corresponding to the local observance date.

In the original order of service for Thanksgiving, the wording to open the testimony period states that testimonies were to be by "members of the church." In December 1905, the Clerk of The Mother Church, William B. Johnson, wrote to Mrs. Eddy, "It is eminently probable that there might be persons in the audience who although not members of the Church have been wonderfully healed and whose testimony would be of great value." He suggested, "The elimination of these words 'members of the church' would give all who have been benefited, especially those who have been very lately helped, a chance to show their appreciation of Christian Science" (L00447, The Mary Baker Eddy Collection). What followed was the change in the Church Manual to the present wording—"Testimonies by Christian Scientists, appropriate for the occasion."

THANKSGIVING SERVICES OUTSIDE THE US

Mrs. Eddy's only comment on holding Thanksgiving services abroad comes in the form of a letter to Lord Dunmore and other members of the General Association of Teachers in London, dated March 7, 1904: "Your 'Thanksgiving Day,' instituted in England on New Year's Day, was a step in advance—it expressed your thanks, and gave to the 'happy New Year' a higher hint. You are not roused to this action by the allurements of wealth, pride, or power; the impetus comes from above, it is moral, spiritual, divine" (L14535, The Mary Baker Eddy Collection).

Mary Baker Eddy's decision to create a Thanksgiving Day service shows her emphasis on the healing power of gratitude and the importance of thanking God for our blessings. But ultimately, she expected her followers to express their gratitude in their daily activities every day of the year. As she wrote, "Gratitude is much more than a verbal expression of thanks. Action expresses more gratitude than speech" (Science and Health, p. 3).

Please contact the Research staff with your historical questions about the Manual, or any other historical aspect of the Christian Science movement, at research@mbelibrary.org or 617–450–7218. 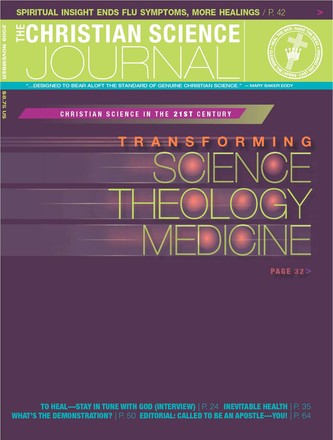 The Key of David

The Thanksgiving Day Service and 'the good already received'

FROM THE CHRISTIAN SCIENCE BOARD OF DIRECTORS

TO HEAL STAY IN TUNE WITH GOD

BACK TO PERFECT RUNNING CONDITION

By JOYCE MILLER with contributions from C. DANIEL MILLER | November 2009