Speaking of King Nebuchadnezzar, the book of Daniel records, "The king spake, and said, Is not this great Babylon, that I have built for the house of the kingdom by the might of my power, and for the honour of my majesty?" His proclamation is followed by a voice from heaven, telling him, "The kingdom is departed from thee." The Bible continues, "And he was driven from men, and did eat grass as oxen, and his body was wet with the dew of heaven, till his hairs were grown like eagles' feathers, and his nails like birds' claws." Dan. 4:30, 31, 33

It is a dramatic event. A mighty king boasts of his personal glory, becomes deranged, and is driven from human company. Some scholars believe the description of the hairs like eagles' feathers and nails like birds' claws refers to mythological stories of men who developed birdlike traits. Others believe it indicates that Nebuchadnezzar in his madness neglected care of himself. But one implication is clear. The narrative carries the theme that pride is associated with madness, whereas in humble obedience to God lies sanity. See The Interpreter's Bible, Vol. VI (New York: Abingdon Press, 1956), pp. 416-418 What does Nebuchadnezzar's experience mean to us today? Of course, it points to the fact that outright vainglory leads to downfall. But isn't there a deeper message? To me, Nebuchadnezzar's derangement can be seen as a vivid illustration of the disorientation associated with the delusion of a carnal ego, the entire belief that life and intelligence are in matter. An ancient ruler in a distant land isn't the only individual who has been afflicted by this fundamental misconception of reality. We all face its challenges.

The Science of Christ makes clear that the real man is the image of God, who is Mind. God's man expresses His benevolent, orderly intelligence. So a supposed carnal ego—an intelligence separate from the one divine Ego—is in essence enmity against God, against divine Mind. It is inherently disordered. To the degree that we're governed by the belief that we have a mortal ego, we're not wholly aligned with divine intelligence. There may be times when this underlying misalignment becomes outwardly apparent in extreme ways, as it did when Nebuchadnezzar's sense of things became distorted. But we can progressively lay off this false ego for the Christly selfhood that is truly ours, the spiritual manhood and womanhood Christ Jesus brought to light.

Our experience may not seem askew because we glory over a literal earthly kingdom, as Nebuchadnezzar did. But mortal ego does present us with a "kingdom" of its making, an apparently material realm with its enticements, which inevitably lead to disappointment. Each moment we have a crucial choice to make about our allegiance. Are we allowing ourselves to be governed by the misconception of life in a material realm, manifest as a mortal ego? Or are we acknowledging only the rule of the one true government, God's heavenly kingdom, which is revealed in our true, spiritual selfhood? To the degree that we believe we're under the power of material conditions, aren't we permitting the mortal mentality behind them to "glory in" its earthly kingdom? To the degree that we humble ourselves before God, we recognize that we live under His government and experience His order and harmony.

This is more than theoretical. Mortal ego may not announce its despotism in so many words. But this fundamental lie appears as the vicissitudes of ordinary living. Does a treasured relationship seem to be unraveling for no apparent reason? Does a particular problem seem endlessly unresolved? Do we feel singled out for difficulties we're sure others don't have? Is an unremarkable day overshadowed by a dark cloud? Does moving forward spiritually seem uninteresting? Do we believe we have wasted our lives? Unwarranted (or even apparently warranted) suggestions that our life is exasperating, ominous, or futile may seem to be a part of the everyday scene. But in the deepest sense, aren't these the carnal ego's enmity against God, its insistence that good is just not very real?

This false ego is always found boasting of its impressively enchanting or threatening material kingdom. As we progress spiritually, we learn to take its deceptive suggestions less seriously. Yet an increasingly sharp awareness of the dark distortions that characterize this pretense of mind can be salutary. This presses us to forsake material selfhood, with its skewed sense of things, and to welcome the awakening to spiritual selfhood, which reflects God's harmony. Mary Baker Eddy explains, "The chaos of mortal mind is made the stepping-stone to the cosmos of immortal Mind." Unity of Good, p. 56

The awakening to true selfhood, which Truth impels, enables us to see mortal faults as powerless and to let go of them.

The mortal ego's domination may not take on the unusual characteristics attributed to Nebuchadnezzar in his derangement. But the disordered, even monstrous, nature of carnal thinking does become more vividly apparent to us as we advance spiritually. Speaking of that repentant state in which previously veiled mental deformity is revealed, Mrs. Eddy says: "Tears flood the eyes, agony struggles, pride rebels, and a mortal seems a monster, a dark, impenetrable cloud of error; and falling on the bended knee of prayer, humble before God, he cries, 'Save, or I perish.' Thus Truth, searching the heart, neutralizes and destroys error." Miscellaneous Writings, pp. 203-204

We needn't fear an increased recognition of the more awful aspects of the carnal mind, even when these seem attached to us, because they are error, and seen as such, they can be destroyed. Severe views of ourselves may not initially seem desirable. Yet, the awakening to true selfhood, which Truth impels, enables us to see mortal faults as powerless and to let go of them. In reality, man reflects God, good. This truth exposes the evils imposed by a supposed material selfhood so that they may be destroyed. Even when we seem to be engaged in the holy struggle through which a false ego is annihilated, the peace of spiritual reality is ever available.

Because the actual selfhood of man mirrors the goodness of God, the one Ego, spiritual individuality is always ours. We feel it palpably in moments of self-surrender. These include our daily affirmations that God's kingdom has indeed come, our self-sacrificing affection for our fellow beings, and our persistent longing for the nature born of God.

A woman who wished to feel that holy nature tells of an instance of praying "with longing intensity." Her account is found in the chapter "Fruitage" in Science and Health by Mrs. Eddy: "How long I waited I do not know, but suddenly, like a wonderful burst of sunlight after a storm, came clearly this thought, 'Be still, and know that I am God.' I held my breath—deep into my hungering thought sank the infinite meaning of that 'I.' All self-conceit, egotism, selfishness, everything that constitutes the mortal 'I,' sank abashed out of sight. I trod, as it were, on holy ground....

"From that hour I have had an intelligent consciousness of the ever-presence of an infinite God who is only good." Science and Health, p. 669

That infinite God, who is only good, embraces us today. We all can feel the profound peace of transparently spiritual selfhood as we expose and forsake the utter presumptuousness of a carnal ego. Nebuchadnezzar did. "And at the end of the days I Nebuchadnezzar lifted up mine eyes unto heaven, and mine understanding returned unto me, and I blessed the most High, and I praised and honoured him that liveth for ever, whose dominion is an everlasting dominion, and his kingdom is from generation to generation." Dan. 4:34 Humble before God, Nebuchadnezzar affirmed God's kingdom to be everlasting. This king's understanding was renewed and so was his dominion. We can embody the same humility. Laying off, in increasing measure, the carnal ego for that nature born of God, we too can find renewed spiritual understanding and the everlasting kingdom that belongs to God. 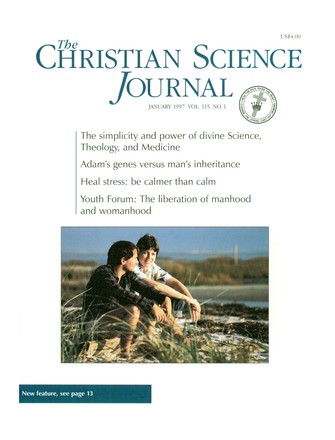 How I cherish Your grace

The harmony and diversity of Spirit

The mind, the body, and God's allness

A look into the mirror of divine Science

A lesson from Nebuchadnezzar

The liberation of manhood and womanhood

Is good personal, or spiritual?

Heal stress: be calmer than calm

God has messages for you. Will you listen?