E. R. asks: "Was ever a person made insane by studying Metaphysics?"

Such an occurrence would be impossible; for the proper study of Mind-healing, if pursued, would cure them. That persons have gone away from Mrs. Eddy's class in metaphysics made insane by her teachings, like a hundred stories of the same sort, is a base fabrication to injure her, or her school. The enemy is trying to make some capital out of the following case, widely rumored. A young lady entered her class, whom Mrs. Eddy advised to withdraw before its close because of hysterical laughing, the only symptom manifested. We are credibly informed that before entering the class she manifested some mental unsoundness and have no doubt but she would have been restored at once by Mrs. Eddy's system of treatment. Her friends employed an Homeopathist who had the skill and honor to give it as his opinion to her friends that Mrs. Eddy's teachings had not produced insanity. That case was the only one that could be distorted into a claim to insanity ever occurring in her class, while acknowledged cases of insanity have been cured in her class.

E. D. says: "If all that is mortal is a dream, or error, is not our capacity for formulating a dream real; and if real, is it not God-made; and if God-made, can it be wrong, sinful, or an error?"

The spirit of Truth will lead into all truth and enable man to discern between the real and the unreal. Entertaining a belief in the opposite of goodness opposes the leadings of the divine Spirit helping man God-ward, and prevents a recognition of the nothingness of the dream, or belief that Spirit is in matter—Intelligence in non-intelligence, sin and death. Any capacity for error never proceeded from Truth. Jesus said "I am the Truth and Life," hence, God never created such a capacity, and He made all that was made. Your answer is that error is an illusion, therefore God is not its author.

S. H. P. says: "Does 'Science and Health' explain the entire method of Metaphysical Healing; or is there a secret back of what is contained in that book, as some claim?"

"Science and Health" is a complete text-book of Christian Science, and its metaphysical method of healing, and given as clearly as it is possible to express metaphysics in physical terms. There is no additional secret outside of its teachings that gives one the power to heal. But it is very essential that the student gains the spiritual understanding of the contents of that book, which none but its Author is able to impart at this period. The above book is the only safe guide for the student of mental healing.

E. J. inquires: "Do you believe in a change of heart?"

We do believe in a change in the belief that the heart is matter and sustains life—to the understanding that "God is our Life," that "in Him we live, move and have our being." This change of heart would deliver man from heart disease, and advance Christianity a hundred fold. There is another heart I believe in as needing to be changed, namely, the human affections. Changed from self to benevolence and love for God and man; changed to having but one God and loving him supremely and helping his brother man. This change of heart will have its effect physically as well as spiritually, and heal disease sooner than burnt offerings or drugs.

B. G. F. asks: "Is a belief of nervousness accompanied with great mental depression, mesmerism?"

All mesmerism is a belief, and all belief is mesmerism of one of three kinds, viz., the ignorant, the fraudulent, or the malicious workings of error, so-called mortal mind. We have not the particulars of the case you refer to, and so cannot answer your inquiry understandingly.

A. C. E. writes: "How can I govern a child metaphysically. Doesn't the use of the rod teach him life in matter?"

The use of the rod is virtually a declaration to the child's mind that sensation belongs to matter. Motives govern acts; if you present to the child's thought right motives for action you can lead him aright; if you direct him in Christian Science you will lead him wisely and he will follow without having to resort to corporeal punishment. 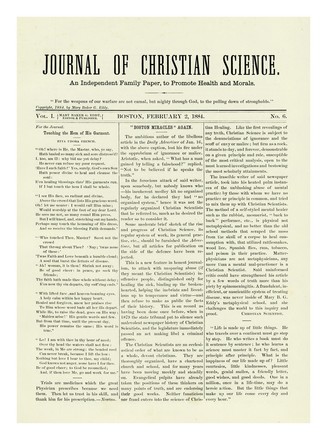 Touching the Hem of His Garment

Life is made up of little things

WAS IT MIND OR MATTER?

When from the lips of Truth one mighty breath...

TO OUR SUBSCRIBERS AND FRIENDS

To the Readers of "Science and Health" and the "Journal of Christian Science."

The embellishments of the person are...

THE WORTH OF WORDS