IN THE MID-1990s, my family and I lived in Ethiopia on the Horn of Africa. During the first year and a half of our stay, I was ill with constant episodes of food poisoning. I was somewhat new to Christian Science at this time, yet I had already witnessed so many lovely demonstrations of the presence of the Christ, which had healed family members of malaria and a ruptured ear drum. I was determined that this, too, could be healed through prayer and a deeper understanding of God's ever-present love for us.

I was involved in a large weekly mom and tot play group. It was comprised mostly of expatriate women and their children. I really enjoyed my time with these other moms as we were all new young mothers living in a foreign country. The only part I really didn't enjoy was when the conversation turned to health issues. It was an accepted assumption among expatriates, who had lived and traveled most corners of the globe, that Ethiopia was an incubator for sickness. Many people didn't enjoy living in this country because their families were constantly ill. Although we had lived in three different African countries by this time, it seemed to be true for our family as well.

Every morning, I would study my Christian Science Quarterly Bible Lesson and other writings by Mary Baker Eddy. This would buoy my thoughts for the day, and I was inspired and fortified by what I studied. I was slowly gaining a deeper understanding of Christian Science. However, what I was learning in my studies did not jibe with what I was observing in my body and what others were experiencing. I had become very skeptical of most foods and would critically assess the environment in which they were prepared before accepting anything that was offered to me. These fears were being evidenced in my body through the episodes I was experiencing.

During this time, I was praying with a Christian Science practitioner. Her assistance and loving patience gave me much strength. I read everything Mary Baker Eddy wrote about food and digestion. Then one day, I came across a section in Science and Health with Key to the Scriptures where Mrs. Eddy wrote: "We need a clean body and a clean mind,—a body rendered pure by Mind as well as washed by water. One says: 'I take good care of my body.' To do this, the pure and exalting influence of the divine Mind on the body is requisite, and the Christian Scientist takes the best care of his body when he leaves it most out of his thought, and, like the Apostle Paul, is 'willing rather to be absent from the body, and to be present with the Lord.'" This passage struck a deep chord with me. I realized for the first time that it wasn't my surroundings that needed to be cleaner, but rather my mind, or thought about my surroundings.

Mrs. Eddy goes on to make a very thought-provoking statement in the following paragraph, comparing a person living in poverty and unclean surroundings to someone accustomed to living in refined surroundings. She wrote, "...impurity and uncleanliness, which do not trouble the gross, could not be borne by the refined. This shows that the mind must be clean to keep the body in proper condition" (p. 383).

I saw that the differences about one's environment lie in the mind of the person in that environment. This certainly applied to me as an expatriate living in Ethiopia surrounded by people who lived in what appeared to be pretty squalid conditions, yet the majority were generally healthy. We all shared the same environment but our thoughts about our environment differed. This new view helped me look on my surroundings with new eyes. Instead of looking for the myriad of ways food and water could make me sick, I saw that food and water had nothing to do with my condition, but rather my thought of them made all the difference. Over a period of about four months. all episodes of food poisoning drastically reduced and eventually stopped altogether. My living standards and experiences had not changed, but my thought had. I was no longer afraid of what food and water could do to me. They were no longer things that held any power over me.

Since then, I have returned to Africa with my husband and four children, and have lived on the continent for eight more years. Over these years, I have not experienced any issues of food poisoning. Interestingly, three of these eight years were spent in Ethiopia for our second posting. During those three years, people were still experiencing and talking about the same things as during the nine years previous. Conversation would often turn to illness, hygiene, or sanitation, but this time, however, I was able to see right through these false impositions on the collective thought, which gave me plenty of opportunity to pray for my family and those around me. I have to gratefully say that our family was completely protected, and our three-year posting was a wonderful time, which we still fondly remember. 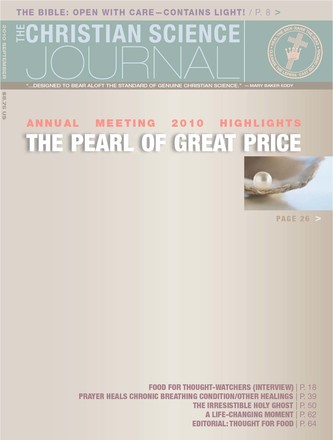 The Bible: Open with Care—Contains Light!

Reading Room near Ground Zero: Then and Now

'To the Church of Christ, Scientist'

LIBERATION FROM PAIN AND IMMOBILITY

FREE OF CHEST PAINS AND FEAR OF FLYING

THE SPIRITUAL INTERPRETATION OF THE BIBLE: A CALL TO 'LAUNCH OUT INTO THE DEEP'