Me? Run a marathon? I had never run more than five miles when I decided to start training for the 26.2-mile race through a club in my high school called Dreamfar. I thought it would be a good challenge—not just athletically, but also spiritually.

I found that I could use the time during the long runs as an opportunity to discipline my thought and focus it on prayer rather than fear.

I trained almost every day, running by myself after school, and with the other runners on Saturdays. At first, these Saturday morning runs were five miles, but they grew longer each week. As the mileage increased, so did my nervousness about the runs. As a Christian Scientist, I knew I could address this fear through prayer. I worked with this idea from The First Church of Christ, Scientist, and Miscellany: “Remember, thou canst be brought into no condition, be it ever so severe, where Love has not been before thee and where its tender lesson is not awaiting thee” (Mary Baker Eddy, pp. 149–150).

I found that I could use the time during the long runs as an opportunity to discipline my thought and focus it on prayer rather than fear. I did this by making sure every thought was God-based. For example, as I looked at the other runners in my group, I’d admire the qualities they were expressing: strength, endurance, grace, and positivity. I worked to turn “things into thoughts” (Mary Baker Eddy, Science and Health with Key to the Scriptures, p. 123) at every moment—seeing beyond mere material appearances to beautiful spiritual ideas—and the runs became more enjoyable and less intimidating.

I began to see that because God is Principle, and therefore constant, then my perfection as the expression of God must be constant. As I grew to understand how reliably good God is, I felt my confidence in God increase. And I felt free of the fear that said something bad would inevitably happen to prevent me from running the marathon.

In February, the training became much tougher. We had to train in extreme winter weather for our first double-digit runs, and I was also struggling with feelings of limitation, specifically illness. I prayed to know that these challenges were simply suggestions that God wasn’t present and all-powerful, or that I could somehow be separated from God. I knew that because God is All and created all, none of these suggestions could touch me.

Still, I ended up having to miss several runs, and as an important 14-miler approached, I became very frustrated. I had done everything I could to prepare, and I only seemed to be feeling worse, and was falling behind in training. I had no idea how I was supposed to complete this run!

It hit me that I needed to rely solely on God and to understand that because I am spiritual, all my strength and ability come from God.

At this point, I realized I was splitting my faith between what I saw as my own abilities—preparation, training, and so on—and God. It hit me that I needed to rely solely on God and to understand that because I am spiritual, all my strength and ability come from God. This realization gave me the mental freedom to see that I wasn’t attempting some demanding task on my own; God was simply expressing Herself in me and enabling me to do what I needed to do. I was able to complete the 14-mile run along six-foot snowdrifts, and during a blizzard, and I was grateful to be able to continue increasing my distance.

As the marathon approached, another obstacle came up. I was having an issue with a muscle that also hurt when I played soccer for my spring club team. I struggled with doubt about the race, wondering if I should even attempt it.

I worked to see myself as a completely spiritual idea, trusting my entire well-being to God. I knew I didn’t have to be afraid of pain or damage, since evil of any kind doesn’t exist in God’s creation.

I prayed frequently with this idea from Science and Health: “There is no death, no inaction, diseased action, overaction, nor reaction” (pp. 427–428). I knew that I expressed God and moved in God’s kingdom, unfettered. There is no activity outside of God, so all action reflects God’s good action and cannot be detrimental to man’s being.

As I prayed this way, I felt confident in my ability to run the race. I also decided to create a journal that I used specifically to pray about the marathon; every day I added ideas and quotes that I was working with that directly counteracted every suggestion of limitation, fear, and so on. As soon as I started this journal, my thought was immediately uplifted, and I had no more injuries or problems for the rest of my training.

My motive for completing the marathon was to feel closer to God and to express dominion.

I found so many wonderful ideas to write and pray about related to running. I love this one from Science and Health: “Mind, joyous in strength, dwells in the realm of Mind. Mind’s infinite ideas run and disport themselves. In humility they climb the heights of holiness” (p. 514). This helped me understand that I could be only joyous when I was running; fear and doubt were not part of my experience. I also knew that I was an infinite idea expressing infinite qualities from an infinite source. I focused on God being the source of all the good I was demonstrating and humbly acknowledged God’s government over every aspect of my training.

In preparation for the race, I worked with Hymn 59 from the Christian Science Hymnal. The second verse reads,

Run the straight race through God’s good grace,
Lift up thine eyes, and seek His face;
Life with its way before us lies,
Christ is the path, and Christ the prize.

I especially loved the declaration that we run the straight, harmonious race through and with God, growing closer to God all the way. The hymn also helped me remember that my motive for completing the marathon was to feel closer to God and to express dominion.

I felt so secure and confident in God’s control and provision for me that I was very calm the night before the race. I focused on this passage in my prayers: “St. Paul wrote, ‘Let us lay aside every weight, and the sin which doth so easily beset us, and let us run with patience the race that is set before us;’ that is, let us put aside material self and sense, and seek the divine Principle and Science of all healing” (Science and Health, p. 20). I was able to put aside the temptation to feel nervous and focus solely on expressing Principle. I knew I wouldn’t be distracted by the physical senses, and instead I would patiently complete the race, recognizing God’s presence and power along the way.

I would patiently complete the race, recognizing God’s presence and power
along the way.

The continuity of all the spiritual ideas I’d prayed with over the course of my training carried me right through the race. In 26.2 miles, I never felt fatigue or weariness. I never felt pain in the muscle that had bothered me. In fact, the second half of the marathon was faster than my first half. I focused on glorifying God and on knowing that God gives me qualities of strength, endurance, dominion, and love. I was supported by wonderful friends, my running partner, and also my mom, who met me every three or four miles to give me drinks or snacks. She even ran several miles with me, sharing metaphysical ideas. The race was a true unfoldment of pure good.

Before I knew it, I was crossing the finish line with the biggest smile. The whole journey, from the first day of training to race day, was an amazing one of spiritual growth and healing. And to see how I grew in understanding my relationship to God was the biggest accomplishment of all.

What we most need is the prayer of fervent desire for growth in grace, expressed in patience, meekness, love, and good deeds.

Mary Baker Eddy
Science and Health with Key to the Scriptures, p. 4 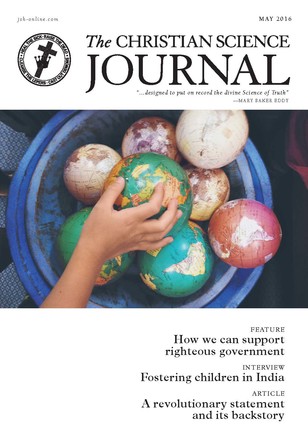 How we can support righteous government

A revolutionary statement and its backstory

At home wherever we are

No fall from Love’s eternal grace

Pain from a fall healed

By Christopher Bordeaux | May 2016

If we are spiritual, and not material, why do we appreciate things like good food?