"Forget not for a moment, that God is All in all—therefore, that in reality there is but one Cause and effect" (Miscellaneous Writings, p.155).

There are few if any who do not believe in the existence of God, but many do not take Him seriously at least as regards the present. The cares of the world are so continuous for those who will care for them, that little time seems left for the contemplation of spiritual things, or to give especially to God. Even Christians are too well content with the hours covered by church services and their private devotions, and the balance of time being considered as rightfully belonging to their material affairs. As to the wisdom of this course the slow Christianization of the race must bear testimony.

Most of us have grown up from childhood with the vaguest conception as to what and where God really is, and the relation we bear to Him. The sun, the sea, the mountains, the flowers, and the stars, entered into our lives as children and men, for we felt that we knew them; but God had always seemed so much farther away than these things, so much less real than our brothers and sisters, that He has been as a stranger to us and found little response in our hearts but fear, because of the mystery about Him We did not feel His presence with us as we did the sunshine and the air, nor had we the same confidence in His love and goodness as in that of our friends. Many earnest Christians have felt that this should not be so; that they should have a sense of closer relationship between themselves and God, a less fearful faith in His protecting love and care than their experience afforded.

No greater change has come to the thought of the Christian Science student than in his belief about God and in his attitude towards Him. That this change has been to better things is evident in the good resulting therefrom; in his healthier body and purer mind, his improved morality and kindliness of heart. As the mystery of a personal God has disappeared and an apprehension of Him as infinite Love has taken its place, a new and sweet consciousness of His nearness and power has come to him and stilled the unrest and fear of the past.

It must be apparent to even the least religious of thinkers that the first and last need of man is to know his origin and the laws that govern him. That this source of law is God is acknowledged by all monotheists, both Jew and Christian, though all are not ready to follow the ascending line of this teaching to that higher plane where man becomes consciously identified with his Maker in substance, quality, and action. The thought that has turned to a belief in matter for the substance, life, and joy of man may find that the returning path lies through much tribulation, for there can be no peace to this false and wicked sense. The oneness of Cause and effect, of Spirit and the spiritual, does not leave man a moment in which to forget God.

The things that are seen (material) seem so much more real to mortals than the things that are not seen (the spiritual) that they are willing to wait indefinitely for a fuller investigation of the truth about God and spiritual things. Many of us remained in this apathetic ignorance until some desperate need led us to seek divine help in Christian Science, and we began to learn the necessity of knowing God aright. "The heavenly homesick" (Science and Health, p. 365), weary of the pains and dissatisfied with the pleasures of a sensuous world, have begun to turn their faces towards their Father; they have begun to remember that God has enough and to spare for all His children, and they find His outstretched arms and His house of plenty.

One of our earliest lessons in Christian Science is that the woes of men are the result of forgetting God. (Psalm 9:17.) The seeming lapse from spiritual consciousness, termed mortality, is "the Adam-dream" (Science and Health, p. 306), the dark, delusive dream of matter, which enfolds all discord. Forgetfulness of God, good, is the opportunity through which evil suggestions enter thought and govern us. Our weak yieldings to temptation, our beliefs that evil thought and will can rule ourselves and others, would be impossible if we always remembered that God is all, and therefore the governing Mind of all men,— the intelligence so absolutely good as to hold no thought of evil, and yet that knows all there is to know. This constant remembrance is not only possible for every man, but is his necessity, that he may fulfil the purpose of his being,—the expression of good.

There is no intermediate ground between the real and the unreal. To be unmindful or unconscious of good is to be necessarily mindful or conscious of evil, and in that period evil becomes more than a supposition to us, for it has replaced God in our thoughts, and we may be lured by its mirage into any of its false conditions. Forgetfulness of God's infinitude is the danger-point for all mortals, since it is a state of oblivion towards good; and dark and dreadful may be the dreams of that unholy sleep.

No one could hate his brother or harm him, even in thought, if he remembered that God is always Love, and that we all have one Father. The absolute perfection of God as the author and supporter of all that is real, throws back upon mortals their every "idle word," their wicked thoughts and deeds. The fact of Love's infinitude, and the consequent nonentity of hate and evil, is the nemesis that pursues every iniquity, every wrong, every unloving thought, to their destruction, consuming them in the fire of their own falsity. If we forget that "infinite Love is reflected in love" (Science and Health, p. 17), let us not complain of the sharp awakening that may follow.

The constant remembrance of God that is scientific and Christian is something more than the mere thinking about Him; it is the recognition of His supremacy in the hour of our temptation to be sick or sinful; the remembrance that God's kingdom is within us and is not shared with either sin or sickness. Constantly to bear in mind the utter impossibility of such an anomaly as a good God and bad man, or that effects are not governed by their cause, will nullify the claim that the divine order is reversed, and unfold to human consciousness the co-existence of perfect Principle and idea as constituting the totality of being.

To him who holds the sense of a personal or corporeal Deity it may seem impracticable to retain God constantly in thought, for it would be as hard to be always mindful of a personal God as a personal man. To such concepts the divine ever-presence and omniscience can mean little more than a sort of extended telepathy. But when we realize that God is universal,—infinite good, Life, Truth, Love,—the divine Principle that is infinitely more than person; when we remember that He is the Principle which is manifest in honesty, gentleness, goodness, loyalty, kindness, and love, we can understand how a constant remembrance of God is possible in every walk and work of human life. The merchant who is honest and upright in his dealings, who feels that he is buying and selling with brothers and not with competitors; or the working man who keeps his thought kindly and pure in the midst of his toil, with every condition and experience in which men and women are placed, they are remembering God in the proportion of their Godlikeness in thought and act.

Man's only safeguard from evil is the fact of good, the all-inclusiveness of divine Principle and idea. But we must be ever mindful of this fact to realize its protection. Our daily struggle with the world, the flesh, and all the subtleties of evil, should keep us awake and watchful lest we forget; even for a moment, that God is All in all. 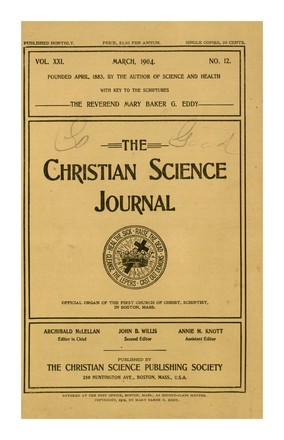 LETTERS TO OUR LEADER

THE CONSTANT REMEMBRANCE OF GOD

THE SCIENCE OF IT

THE METHODS OF JESUS

MISUNDERSTOOD POINTS ABOUT MRS. EDDY AND HER CHURCH EXPLAINED

CLERK OF THE MOTHER CHURCH

Having passed through many stages of unbelief,—...

Persons whom Christian Science has blessed use every...

Nearly thirteen years ago I was healed by Christian Science,...

From earliest boyhood my heart went out in yearning...