BUFFETED BY EVERYTHING from random suicide bombings to carefully coordinated attacks, nations around the world are struggling to find answers to the threat of terrorism. Protected by murky return addresses and having little stake in the status quo, terrorist groups all too easily circumvent traditional methods of containment. Moreover, the scope of terrorist threats has decentralized and expanded exponentially, so much so that not just rogue regimes, but any one or few of the 6.7 billion people who share the planet now have the potential to cause major societal disruptions. Many governments worry that, under these circumstances, their capacity to protect against political and religious extremism is severely limited.

But there is another way of looking at the issue of terrorism that challenges the presumed inevitability of global violence. By revealing man's spiritual nature (meaning both men and women), Christian Science brings the promise of healing not only to individuals but to a discordant world as well. Defying the notion that evil is supreme and that man is vulnerable to its wicked designs, Christian Science provides the assurance of ultimate safety and immunity from harm.

Terrorism is catalyzed by many things: cultural alienation; frustration—sometimes legitimate—stemming from thwarted national or ethnic ambitions; radical political and religious doctrines. But the underlying cause of terrorism is the pernicious belief that man can be governed by hatred and subject to violent impulses. Christian Science, to the contrary, explains that the only real catalyst to human action is the Christ, that which Mary Baker Eddy, the Discoverer and Founder of Christian Science, described as the "divine influence ever present in human consciousness" (Science and Health, p. xi).

Describing the basis of Christ Jesus' healing ministry, Mrs. Eddy explained that the Master "beheld in Science the perfect man, who appeared to him where sinning mortal man appears to mortals," adding that "this correct view of man healed the sick" (Science and Health, pp. 476–477). Viewing current events through this same lens we can see, with equally certain results, that man is not governed by base instincts but by the kindly, peace-perpetuating impulses of Soul, God. That man bears the exact nature of his/her Creator, reflected in innocence, purity, and holiness. We see that the sons and daughters of God's creating are not a conduit for evil passions but, controlled by divine intelligence, express only "the sweet amenities of Love" enumerated by Mrs. Eddy as "true brotherliness, charitableness, and forgiveness" (Church Manual, p. 40). We do not have a mind of our own that can be conditioned into hatred and resentment but are obedient to the one Mind from which all ideas emanate. "The real man cannot depart from holiness, nor can God, by whom man is evolved, engender the capacity or freedom to sin," Mrs. Eddy wrote (Science and Health, p. 475).

The Old Testament prophet Jeremiah caught a glimpse of a new covenant between God and man in which God's law would be written in every heart: "After those days, saith the Lord, I will put my law in their inward parts" (Jer. 31:33). And the Psalmist assured that the heart of man is fashioned by God (see Ps. 33:15)—not by injustice, not by human history, not by ethnic, religious, or national rivalries, but by divine Love itself. The heart thus fashioned cannot be deceived, used, or motivated by evil. God's children—all of them—are the sheep of His flock, tenderly loved and cared for, drawn irresistibly to the Shepherd's voice, against which there is no countervailing influence. "My sheep hear my voice," Christ Jesus said, "and I know them, and they follow me: ... neither shall any man pluck them out of my hand" (John 10:27, 28).

In Science and Health, Mrs. Eddy commended thought based on spiritual premises and "wrested from human belief" (p. 178). Only by wresting thought from the conviction that the man of God's creating is capable of conceiving or perpetrating evil—only by reckoning that error can neither derive from nor operate through God's offspring—can we place ourselves safely within the understanding of God's protection. The power of such understanding is neither theoretical nor intangible but has a transforming influence that is never to be underestimated. Every quality of man is derivative—derived from the Mind that is the Creator of all that exists. And the existence of only one Mind points to an irresistible centripetal influence that conforms all human action to the design of God, good.

Throughout history, the keys to national security have been deterrence and retaliation —convincing adversaries that the cost of aggression is unacceptably high. Christian Science provides an entirely new way of thinking about deterrence and retaliation—resisting and destroying through spiritual understanding the aggressive argument that evil can govern individuals or nations.

Mary Baker Eddy's charge to Christian Scientists to "hold crime in check" (Science and Health, p. 97) stemmed from her complete confidence that, through the reflected power of God's omnipotence, Christian Scientists are capable of doing so, thereby healing collective as well as individual wrongdoing.

Notably, she was convinced that there was a cause-and-effect relationship between the advent of Christian Science and the amelioration of the aggravated political, economic, and social conditions of her day: imperialism, concentrations of economic power in unregulated trusts and monopolies, industrial slavery, the abridgement of human rights—some of the "imminent dangers confronting the coming century" (The First Church of Christ, Scientist, and Miscellany, p. 266), as she once described them. She was persuaded, moreover, that her call for the members of The Mother Church to "pray each day for the amicable settlement" (Miscellany, p. 279) of the Russo-Japanese War of 1904–1905 achieved just that result, in a peace treaty signed only weeks later and just 40 miles from her home in Concord, New Hampshire.

We can have confidence in the clear correspondence that exists in our day between the earnest prayers of Christian Scientists and the course of human events.

Even so, we can have confidence in the clear correspondence that exists in our day between the earnest prayers of Christian Scientists and the course of human events—of the power of Truth, in Mrs. Eddy's words, to leaven "the whole lump of human thought" (Miscellany, p. 114).

Experts generally agree that terrorism will continue to be one of the greatest challenges of the new millennium. But what is a millennium but what Mary Baker Eddy described it to be, "a state and stage of mental advancement, going on since ever time was." And the advancing states and stages of human thought, irresistibly propelled by Truth recognized and demonstrated in Christian Science practice, foreshadow the end of human enmity, with the broadest global implications. Of the advancing millennium Mrs. Eddy wrote: "Its impetus, accelerated by the advent of Christian Science, is marked, and will increase till all men shall know Him (divine Love) from the least to the greatest, and one God and the brotherhood of man shall be known and acknowledged throughout the earth" (Miscellany, pp. 239–240). 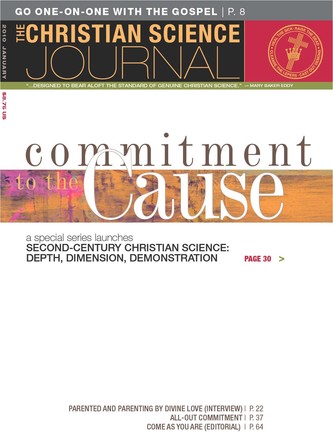 Go One-on-one with the Gospel

Science and Health at the 'God Table'

PARENTED AND PARENTING BY DIVINE LOVE

COMMITMENT TO THE CAUSE OF CHRISTIAN SCIENCE: THE FIRE WITHIN

FIRST NIGHT ON A TALL SHIP