In reading the story of David the careful student cannot fail to be impressed by the significant fact that David was at home, engaged in caring for his father's sheep, when the call came to him to go to wider fields of usefulness. No work could have been more humble or apparently farther removed from all opportunity for active aggression against the enemies of his people, and a lad of even less mettle than David possessed might with seeming justice have rebelled when his brethren started out for the battle without him. There is no record, however, that he did anything but continue at his appointed task without a protest; and that he was faithful to it is plainly shown by his words before King Saul later on. Surely, one described as a mere youth, whose understanding of God's power and ever-presence was sufficient to deliver his flock from "out of the paw of the lion, and out of the paw of the bear," was preeminently fitted for something greater than the peaceful occupation of tending sheep on sunny hillsides. We realize this clearly, and perhaps— who knows?—he realized it, too; but the point to be considered here is emphatically and solely this, he did his duty.

The simple narrative grows suddenly absorbing as we discern its deeper meaning and see that it is not merely the story of a dead-and-gone king of Israel, but of a condition of thought as old as his own ancient Judean hills. For "there is no new thing under the sun," and others beside David may have felt it unjust at times to be compelled to stay and feed "those few sheep in the wilderness," when they yearned to be with their brethren in the thick of the battle. It is so hard to be willing just to wait! But our dear Leader has reminded us that it is God who "owns each waiting hour" (Miscellaneous Writings, p. 389). And it must ever comfort us to remember that it was the lessons learned in those very "waiting" hours which enabled David to do the fighting later on.

When I first came into Christian Science I dreamed wonderful dreams of what I was going to do to help awaken "a weary world, asleep and bound." I was ready, then and there, to leave my few sheep (with never a thought as to what was to become of them), to forsake the commonplace, homely duties which had been mine so long, and run with eager footsteps after those who had already gone out against Goliath. But divine Love knew better than I what was good for me. I had not yet proved my shepherd's sling. Instead of fighting Goliath picturesquely, with the eyes of all Israel upon me, I had to go back into the wilderness and fight, alone with God, a much more formidable foe,—my own ambitious, proud, impatient self, with its army of false beliefs. David had to smite the lion and the bear before he could smite the Philistine; and the errors of belief in materia medica and false theology must be overcome in consciousness before we are ready to take our dauntless stand against the greater Goliath of belief in matter. David met the Philistine armed only with his sling, "in the name of the Lord of hosts." In refutation of the testimony of the material senses the "five smooth stones" proved indeed an adequate defense against the gigantic claim of life in matter. On that stately battlefield the understanding of Mind was arrayed against the belief in matter, as it is to-day. The spiritual idea went out against the material; it confronted the mortal of human imagination, weighed down by its useless armor of centuries of false education, and that sacred conflict ended, as it must ever end, in error destroying itself. For we find it was with Goliath's own sword,—his faith in materiality,—that the death-blow was finally given.

"The weapons of our warfare are not carnal," but oh, the wonder of those "waiting" hours when we are learning how to use them! The wilderness for us may mean the home, the office, the store, the workshop, and our "few sheep" may be "the trivial round, the common task," under whose necessities we chafe with all the rebellion of a newly aroused activity. Error whispers, "You ought not to have to do this sort of thing. You are fitted for something better." (Ah, the honeyed sweetness of that flattering inflection! Truly "the serpent was more subtle than any beast of the field.") What is our reply? Is it to drop, then and there, our shepherd's staff, and begin "rushing around smartly" (Miscellaneous Writings, p. 230) in quest of that something better for which "we" are so preeminently fitted? Is it not, rather, to turn an uncompromising' back to the tempter; to declare, "Yes, I am fitted for something better, but only as I prove myself faithful to the thing I am now doing," — to go on earnestly trying to learn the lessons which our Father is daily, hourly teaching us, lessons in patience, in self-denial, in obedience, in love?

How quickly we come down in our own esteem when we begin to see ourselves as God sees us, and to realize, even faintly, how much we have to learn! Almost first of all we come to distinguish between mad ambition and the sudden stirring to action which ever accompanies the breaking of what our Leader terms "earth's stupid rest" (Miscellaneous Writings, p. 398). We have to learn to accept without demur the lowest seat in the synagogue; to be accounted least, when we secretly think we are doing pretty well; to follow where we once wished to lead. We have to learn that we are not too good, nor yet too fine, for any work, so long as it is honest; to be pitied without feeling resentment; to seem to fail without feeling discouragement; to succeed without feeling pride. We have to learn to receive blame without loss of temper, and flattery without loss of poise; to acknowledge without envy the good work of others; to note their mistakes with charity; to receive merited rebuke with gratitude, and unmerited rebuke with patience. To forgive and forget; to receive, and never cease to remember. We have to learn to be left behind without whimpering; to be misjudged without a pang of self-pity; to be reviled, and remember only him who answered "not a word." To be content — since God understands — to let the world go by, wagging its head and thinking what it will. To ask, by knowing that we already receive all; to forgive, by knowing that there is nothing to be forgiven; and to work mightily, by knowing that it is not we, but "God which worketh in you." We have to learn not only to be willing to feed our Father's sheep, but to rejoice to feed them, since it is His good pleasure; and — perhaps hardest of all — we have to learn not to complain because they are "so few."

Some one has thus summed up the Christian life: "To be always doing things for God, and not to care because they are such little ones." Not to care when one monotonous day slips into the next in seemingly endless succession, and the small things of life encroach upon time and thought which we long to devote to something higher. Perhaps we even stop, now and then, in the midst of some distasteful work, to listen to the distant shouts of our victorious brethren in the battle and to wonder wistfully why the task of God's appointing is so different from the one we would have chosen for ourselves. But the next instant we have pressed resolutely on, declaring, "There is no distasteful work, since God gives all. I will be faithful." And then —O miracle of Love! — the time at length comes when we suddenly find that what was once a wilderness has so grown to ''rejoice and blossom as the rose" that it is a wilderness no more, — which is God's beautiful way of taking us out of it. That which no longer exists in our consciousness can no longer hold us, and we leave it, as did David, at that unfolding of a higher sense of Life and Love.

I like to fancy how it came to him, that memorable day of long ago which was to transform the simple shepherd lad into a king over his people, Israel. I like to fancy how every humdrum, homely duty had been patiently performed, and how he was returning to the sheepfold at sunset, staff in hand, gently leading on his flock with the same fidelity which had characterized all other days. And then his father's messengers ride out to meet him, and I can see the glad light kindle in his face as he hears the summons he has waited for so long! In some such sweet, unexpected way will come to each of us that golden hour. How near it may already be, we cannot tell, nor should we waste a moment in wondering, for God, who is the "all-knowing, all-seeing, all-acting, and all-wise" (Science and Health, p. 587), is taking care of that. Our only care is to keep on with the thing we are now doing, to do it as well as we can, and to know — absolutely — that as soon as we are ready for something better, something better will be ready for us, for "such is the law of Love." And on some unlooked for day as we are returning to the sheepfold, staff in hand, hearts ever attuned and listening, we shall hear the welcome sound of the Father's voice, "Thou hast been faithful over a few things, I will make thee ruler over many things." 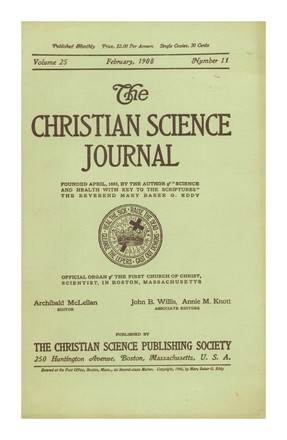 SOME THOUGHTS ON HISTORIC JUDAISM.*

CARDS IN THE GERMAN PERIODICAL

SOME OBSERVATIONS ON THE EFFICACY OF MATERIAL MEDICINE

"For some reason best known to themselves, the translators...

"FAITHFUL OVER A FEW THINGS."

THE LOGIC OF CHRISTIAN SCIENCE

A POCKET EDITION OF THE HYMNAL

As "a just acknowledgment" I submit my tribute for...

I had been troubled with my kidneys off and on for a...

It is with deep gratitude that I send my testimony to...

It is with a great sense of gratitude in my heart, for...

For a long time I suffered from mental depression and...

It is now a little over four years since I first heard of...