In these days of so-called "big business," when we talk of billions of money as lightly as we used to talk of thousands, it is well for Christian Scientists not to be swept off their feet by the mesmerism of enthusiasm and large figures. We have not far to seek to find the reason and occasion for Christian Scientists to be moderate in their views, our revered Leader with her marvelous foresight having clearly set forth "God's requirement" in this direction in Section 5 of Article XXIV of the Church Manual. This By-law reads: "God requires wisdom, economy, and brotherly love to characterize all the proceedings of the members of The Mother Church, The First Church of Christ, Scientist."

All this is plainly pertinent to the question of church building. While it is true that Christian Science churches and societies should, when possible, own the edifices in which they hold their services, they should not run heavily in debt in acquiring them. At one time it was an unwritten law that these edifices should be paid for in full upon completion; later it was believed that all the proprieties would be complied with if they were not dedicated until paid for, and later still it became, with some at least, a sort of permissible condition to incur a large debt, even though entirely out of proportion to the value of the land and buildings.

This increasingly lax view was, of course, merely an outgrowth of the ease with which debts usually could be contracted, and as a consequence there are churches today whose resources are largely consumed in paying a high rate of interest on money borrowed to erect an edifice entirely beyond the means of the congregation, both as to size and elaborateness of detail. Because these churches are in such a financial strait they are unable to bear their proper share of the work of advancing the cause of Christian Science, and the circulation of our literature is more or less neglected, as are also other means by which the truths of Christian Science should be brought to public attention.

This undesirable condition need not have been, had those responsible for such a status been mindful of the Master's apposite question, "Which of you, intending to build a tower, sitteth not down first, and counteth the cost, whether he have sufficient to finish it?" It is strange that a community of interest seems at times to blind men and women of otherwise sane judgment and clear vision and influence them to decisions which they would not consider for a moment in relation to their personal affairs. But corporate bodies no less than individuals are amenable to the Scriptural saying, "Owe no man anything." Indeed it might well be adopted as the watchword of Christian Science churches, especially in the matter of church building.

The secret, if it may be called a secret, of keeping free from the burden of debt lies in modifying our desires until they are at least within the limit of our capacity to pay for that which we buy. It is right that Christian Scientists should give expression to the love and gratitude they feel for all that Mrs. Eddy's teachings have brought into their lives in making their houses of worship beautiful, yet we should not forget that God is most truly worshiped "in the beauty of holiness." The best that any church can command within its resources is none too good for God's house; but to go beyond that point is to make it not the offering of the church but of the bank or individual that holds the bond. There is no economy in buying something which is without merit simply because the price is low, yet to go beyond what is reasonably necessary, and to practise extravagance simply because we are not required to make immediate payment, is the worst kind of improvidence.

Since January, 1914, the Trustees under the Will of Mary Baker Eddy have paid to churches from funds in their hands several hundreds of thousands of dollars to aid in building Christian Science churches. A condition of such assistance is that no payment will be made by them except in cases where the amount contributed from this fund will enable the branch church or society receiving this money to complete its building free from debt. The result of this rule has been most encouraging, namely, to induce a large number of churches and societies to keep strictly within their means in their building operations, and to make them willing to omit many expensive but unnecessary features which would otherwise have run them into debt.

To the rightly constituted individual, debt is condition to be abhorred, and no one abhorred it more than did Mrs. Eddy. In the building of The Mother Church and the large extension to it our Leader was peremptory in her demands that every bill should be paid, and paid promptly, and it may well be remembered that in both instances when the Treasurer was able to announce that sufficient money had been received to pay for the buildings, the newspapers of the country hailed these announcements not only as marking a new era in church building, but also as something to be most heartily commended. It would seem therefore that departure from the example set for Christian Scientists by Mrs. Eddy in this regard is not only a regrettable failure on their part to follow her demonstration, but it places the church that has been lured into making this mistake, and the cause which it represents, in an undesirable light before the community.

On page 360 of "Miscellaneous Writings" Mrs. Eddy sums up the argument in these words: "Meekness, moderating human desire, inspires wisdom and procures divine power." If our churches and societies are to minister to their respective communities to their fullest capacity, surely they must be reared upon this basis. That more serious thought should be given to so important a matter as wisdom and true economy in the building of churches seems evident, and judging from indications which come to us we feel sure that in many quarters this serious thought is being given. 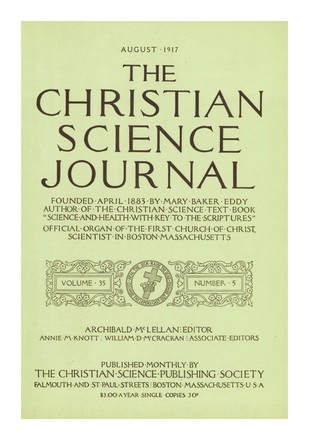 RECOGNIZING THE WORKS OF GOD

THE GIFT OF THE KINGDOM

THE LABORER AND HIS HIRE

"SO RUN, THAT YE MAY OBTAIN"

I write this testimony with the...

When I began the study of Christian Science...

I am indeed grateful to have the...