AS we accept the teaching of Christian Science, we certainly learn that material appearances do not reveal the truth of what is happening around us. When Jesus became aware that his disciples were consistently seeing matter as real and seemed to misunderstand his purpose and meaning, he asked them a little sadly, "Having eyes, see ye not? and having ears, hear ye not?" (Mark 8:18.) Mrs. Eddy refers to this passage on page 38 of Science and Health and adds, "He taught that the material senses shut out Truth and its healing power."

Seeking as we do to follow the way revealed by Jesus, we need to explore further what is meant by the question, "Having eyes, see ye not? and having ears, hear ye not?" We need surely to find out what is actually true about the things that are going on around us, things which we neither see nor hear.

Material sense, as anyone knows from experience, is not even humanly reliable; for example, a railroad track appears to converge but does not; the warm water that was made to trickle over the felon's arm, referred to on page 379 of Science and Health, was not blood, as the felon thought; yet the uncorrected sense testimony—that he was bleeding—caused his death. We have learned through experience to correct the material sense testimony many times a day, most of the time without being conscious that we are doing so. As Christian Scientists, however, we must go a step further; we must learn to see beyond and beneath the surface appearance and discern, as Jesus did, the reality composed of eternal verities. In every case he beheld what the human mind did not see, whether it was food for the five thousand, calm instead of storm, or life to replace death.

Mrs. Eddy was asked this question (Miscellaneous Writings, p. 74): "if God does not recognize matter, how did Jesus, who was 'the way, the truth, and the life,' cognize it?" In answering, she establishes the guide for every individual who desires to know what is happening in the world today as well as amid the sharp noises of his own individual experiences. She says, "Christ Jesus' sense of matter was the opposite of that which mortals entertain." And she continues, "His earthly mission was to translate substance into its original meaning, Mind." Further on in the same paragraph, she explains: "Walking the wave, he proved the fallacy of the theory that matter is substance; healing through Mind, he removed any supposition that matter is intelligent, or can recognize or express pain and pleasure. His triumph over the grave was an everlasting victory for Life; it demonstrated the lifelessness of matter, and the power and permanence of Spirit."

With this clear statement in our thought, how shall we interpret such errors as wars and bitterness—personal, national, and international? Shall we see them as real, as actually happening? Is good being destroyed or deserted? Does evil have power? Shall we be persuaded that the situation is hopeless because having eyes, we see not and having ears, we do not understand?

Jesus established the truth which should have ended the mist of the Adam-dream for all time, but eyes continued to see and ears to hear the distortions of this mist and believed them. Yet all the time this mist was merely hiding the glorious spiritual universe which Jesus saw so clearly.

Mrs. Eddy, many hundreds of years later, saw through this mist. Seeking and praying to understand the Christ, Truth, as Jesus revealed it, she sought and found and recorded the way that one may disperse this mist and see clearly the reality that it hides. She saw that the kingdom of heaven is real and present and that it remains forever unchanged.

Christian Scientists discern what is an inevitable fact, namely the total annihilation of all belief in matter as actual or as powerful and the acknowledgment of the reality of all that is spiritual and eternal. Christian Scientists see through every phase of matter to a truth it may hint but which, as matter, it can never be. It is by the persistent acknowledgment of real events, real experiences, that eyes are opened and ears become unstopped.

The writer, when a child, presented a lovely rose to a very dear and gentle philosopher. Accepting it with evident appreciation, he remarked to her that we shall need the rose to look at until we can see the idea "rose." His remark lingered in her thought uncomprehended for many years until Christian Science revealed its meaning.

In the Bible we find many examples of what can be seen when our eyes and ears are seeing and hearing the truth. What was happening during the all-night struggle of Jacob? A lifelong sense of injustice was being healed; a true sense of abundance was being revealed; a misconception about the true nature of man was being corrected. Jacob found that what he had taken from Esau had not enriched him, and the next day he found that it had not impoverished Esau. In Jacob's own words, he had seen God "face to face" (Gen. 32:30).

What was happening at the river Hiddekel, when Daniel, even though in despair, stood and saw a vision while others fled? Reality was being discerned; spiritual sense was being used. What happened there led Mrs. Eddy, centuries later, to define "Hiddekel" as, "Divine Science understood and acknowledged" (Science and Health, p. 588).

What did Jesus see at the mount of transfiguration that Peter, James, and John were unable to comprehend? What was happening while Jesus was, to material sense, on the cross and in the tomb?

What is happening in an individual's life when pain, lack of work, lack of supply, lack of friends, seem true to unseeing eyes and unopened ears? Our Leader assures us that exactly the reverse of these negative conditions is true: that the worst circumstances are but extreme opposites of what is real and true. It is imperative that we, as Christian Scientists, be well informed on current events. But, above all, we should clearly discern what is really happening in personal, national, and international affairs. Such clear seeing so changes our standpoint that we find ourselves free and courageous, certain that God's government is the only government.

What if the material dismantling of matter makes a thunderous noise? Let us hold to the standard Robert Browning sets forth of

One who never turned his back but marched
breast forward,
Never doubted clouds would break,
Never dreamed, though right were worsted, wrong
would triumph.

As we learn to see what is really taking place in and around us, our lives become like a room lighted from within. This light shines out into the darkness through many panes of glass, many attitudes of mind. Illumined thought radiates with the glow of infinite glory, infinite justice, infinite beauty, infinite abundance, infinite and individual right association.

As we learn to live in the consciousness of God's kingdom—and God's kingdom is the only kingdom—we have eyes that see and ears that hear. We are then witnesses to the teaching of Christ Jesus and Christian Science. Those who see our lighted life are led to the open door through which all may experience the consciousness which reflects God. Elizabeth Barrett Browning wrote,

. . . Earth's crammed with heaven,
And every common bush afire with God;
But only he who sees, takes off his shoes.

Christian Science urges that we be among those who take off their shoes, because we know that we are on holy ground.

God's government is the only government; it is exact, just. It is here. There is no other government. Its laws influence and govern the whole of existence from the smallest contact to the largest and most expansive associations and operations. God's government is almighty power. It is appearing to every open mind.

This government of God is what is actually happening. 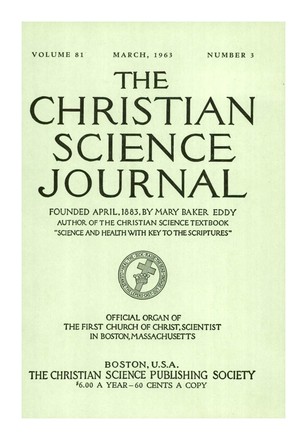 THE PLACE OF REASON AND INTELLECT

THE SCIENCE OF GOD'S KNOWING

THE COMFORTER IN THE ATOMIC AGE

THE SENSE OF GOOD DESTROYS EVIL

THE "WORKS" AND THE "GREATER WORKS"

"WHO CAN BE AGAINST US?"

"TO HIM THAT OVERCOMETH"

THE ART OF SCULPTURING