Every summer in arid places and increasingly in other places all over the world, fire season is a dreaded time of concern and heightened fear for residents and firefighters alike. My family lives in an area often afflicted by fires. The anguish and devastation sometimes experienced by my neighbors have prompted me to turn to God in urgent and fervent prayer. In seeking to heal and remedy the suffering of so many owing to wildfires, I’ve sought to understand the laws of God and how they are available to quench inflammation and prevent catastrophic wildfires.

I’m convinced that the truth of God’s omnipotent law, the law of Love, can be effectively applied to alleviate suffering from wildfires and other environmental issues—even reverse climate change—as surely as it can alleviate pain and inflammation in the body. These may seem to be grand claims. But the fact that we are not helpless in the face of seemingly overwhelming problems has been proven many times. It is illustrated throughout the Bible, in the history of Christianity, and in the practice of Christian Science during the last 150 years, including in my own experience.

For example, Jesus calmed a violent storm that threatened the lives of his disciples during a boat journey across the Galilean Sea. His understanding of God’s presence and power gave him the authority to rebuke the wind and command the sea, “Peace, be still.” And the Bible tells us “the wind ceased, and there was a great calm” (Mark 4:39). St. Paul also proved the power of prayer to protect not only himself but others on board ship—in his case, 276 people in all—during a violent and prolonged storm at sea (see Acts, chap. 27). He received assurance from “the angel of God” that there would be no loss of life from this seemingly hopeless situation. And so it proved.

In the Old Testament, the story of Elijah illustrates how understanding God’s omnipotence can correct inflamed mental environments and end dire climatic conditions (see I Kings, chaps. 18, 19). Jezebel, the wife of King Ahab, had caused God’s prophets to be violently slain, while she promoted the pagan priests who worshiped Baal. King Ahab accused Elijah, the great prophet of God, of causing a severe drought in Israel. But Elijah pointed out it was corrupted thought and practices that had caused the extreme climatic conditions troubling the region. Then he was able to turn the hearts of the people back to the one God through a demonstration of His power, and rain followed. After that, God showed Elijah on Mount Horeb that He was not in violent expressions of power such as raging winds, catastrophic fires, or devastating earthquakes, but that He was a healing power expressed through a “still small voice.”

Through an understanding of the divine Principle of the universe and its Love-impelled power, which Christian Science elucidates, we can experience the same corrective and saving law of Spirit that nullifies so-called physical laws. Recognizing that what the Bible calls “the carnal mind”—a supposed material, selfish mentality—spawns destructive climatic and environmental conditions, we can confidently address through earnest prayer what would otherwise seem to be insurmountably large problems. The following are some elements related to wildfire that I often address in my prayers for my community.

Tendencies toward human carelessness, ignorance, or intentional arson can be reversed through understanding that God, omnipotent Love, alone governs the man of His creating (the true identity of all of us). People often seem to be motivated by destructive tendencies stemming from human will, abuse of power, boredom, revenge, hatred, or anger. But Christ Jesus illustrated how reflecting the consciousness of God, divine Truth, could bring healing to such tendencies. He healed individuals plagued by mental illness or angry, destructive states of thought (see Mark 1:23–26, 5:1–20).

The Bible calls Christ Jesus’ divinely enlightened and divinely governed consciousness “the mind of Christ” (I Corinthians 2:16), and encourages us all to be clothed in this spiritual understanding. Christian Science reveals how to do this in a way that brings healing to not only mental but environmental extremes. It teaches that the divine Mind is ever present and available to neutralize through prayer an atmosphere of rage, anger, human will, or other inflamed mental states. This in turn harmonizes the physical environment, which is actually a manifestation of the atmosphere of thought.

We are not helpless in the face of seemingly overwhelming problems.

Mary Baker Eddy states in her Miscellaneous Writings 1883–1896, “The atmosphere of mortal mind constitutes our mortal environment” (p. 86). But raw human opinions or desires to control through intimidation or fear have no power to destroy the harmony of God’s true government.

In the Glossary of Science and Health with Key to the Scriptures, Mary Baker Eddy gives these metaphysical definitions on page 586: “Fear. Heat; inflammation; anxiety;…” and “Fire. Fear; remorse; lust; hatred; destruction;…” The truth of God’s gentle presence brings calm, cools tempers, and lifts individuals to constructive, productive states of thought and methods for accomplishing justice and equity. We contribute to better mental, emotional, and physical environments when we refuse to add incendiary fuel to political discussions or home atmospheres, but instead humbly contribute thoughtful ideas that reflect the healing and unifying power of God’s love and spirit.

In the second part of her Glossary definition of wind in Science and Health, Mary Baker Eddy explores the connection between climatic conditions and destructive aspects of mortal thinking when she defines wind as “destruction; anger; mortal passions” (p. 597). But elsewhere in Science and Health she indicates the supremacy of divine Mind over these turbulent emotions. She explains, “Moral and spiritual might belong to Spirit, who holds the ‘wind in His fists;’ and this teaching accords with Science and harmony” (p. 192).

Years ago, I led a canoe trip for young women on a Canadian lake. The shoreline was steep and rocky, and stiff winds could make travel dangerous. One day violent waves swamped several canoes. The shore was filled with floating logs and driftwood crashing against the rocky cliffs. We had trained for deepwater rescues and recovery of swamped boats. But the challenge of executing these maneuvers amid crashing white-capped waves caused us to reach out to God for wisdom, courage, and strength. Gratefully, we all made it safely to a beachhead.

That night I humbly turned to God, acknowledging His loving presence and my need for His guidance. I thanked Him for the law of Love and the power of His stillness sustaining all life. I prayed that we “live, and move, and have our being” in God, as Paul indicated in the Bible (Acts 17:28). I denied that we were moving in a large material universe governed by mindless physical forces or laws, and knew that these so-called forces were nothing but human beliefs, which are proved powerless by the gentle, all-encompassing power of God, good.

Over the next few days we had several peaceful, calm, and fun-filled experiences, but toward the end of the trip, we were confronted with a ferocious headwind. Foaming waves filled the lake. Retreating to a sheltered cove, the girls and their counselors took a hike up a beautiful rushing river. I pulled out the only copy of the Christian Science Sentinel I had in my backpack and found it included an article titled “Overcoming destructive weather” (see William Marshall Fabian, May 24, 1975). Perfect! The article completely reversed any concern I had. I felt the calm authority of the Mind of Christ. When I looked up, the whole lake had calmed. We joyfully resumed the journey and arrived safely at our destination the next day.

That article from the Sentinel had included this paragraph: “Christian Science shows that one cannot use mental and spiritual means to manipulate the weather. Weather is material atmosphere, and to attempt to manipulate it would perpetuate the deception that weather and its discordant conditions have substance and reality. But we can scientifically reverse the erroneous human belief of destructiveness with the truth that being is harmonious in Life, God. Spirit is the only true substance and Mind, and governs all reality concordantly.” This verified my earlier prayer about living in God, Spirit, and His Love-ordered universe.

I remembered this experience years later when my mountainous community was threatened by a fast-moving fire. At night we watched the flames advance on a remote enclave of homes. In the middle of this, a strong wind began to blow, which the locals call a “Mono wind” and which, historically, is violently active for several days. My husband and I strongly challenged the fear and belief that disaster was inevitable, and again relied on the Science of Christ to bring God’s calming government and control to light.

I remembered this statement by Mary Baker Eddy: “There is no vapid fury of mortal mind—expressed in earthquake, wind, wave, lightning, fire, bestial ferocity—and this so-called mind is self-destroyed. The manifestations of evil, which counterfeit divine justice, are called in the Scriptures, ‘The anger of the Lord.’ In reality, they show the self-destruction of error or matter and point to matter’s opposite, the strength and permanency of Spirit” (Science and Health, p. 293).

I prayed to know that home is a spiritual idea in Spirit, God, and is therefore indestructible. The first part of Mrs. Eddy’s definition of wind was also helpful: “That which indicates the might of omnipotence and the movements of God’s spiritual government, encompassing all things.” This may refer to the Holy Spirit’s manifesting itself as wind on the Day of Pentecost. This true spiritual movement can only bless, not destroy, anything that reflects God’s blessing and care.

After praying this way, the wind died down. The next day’s news reports mentioned the unexpected calm, which allowed the firefighters to get the upper hand. The fire was contained, and no structures were lost.

In praying about fires and other disasters, I have found it helpful to prayerfully support the firefighters and various response agencies. The one Mind we call God is reflected by all, and we can be of assistance by knowing that human egos and agency conflicts cannot interfere with or prevent harmonious and efficient cooperation. I maintain in my prayers the humility, wisdom, right judgment, and action of all involved. I pray to know that the infinite supply of an infinitely good God is available to provide every right idea needed in wisely allocating resources, and that the impartial love of God blesses and preserves all in His loving embrace.

We need never feel helpless in the face of threatening conditions. God is at hand to provide everything needed. I’ve been so grateful for the Science of Christ and how it enables us to contribute to the recognition and demonstration of God’s healing and saving power. 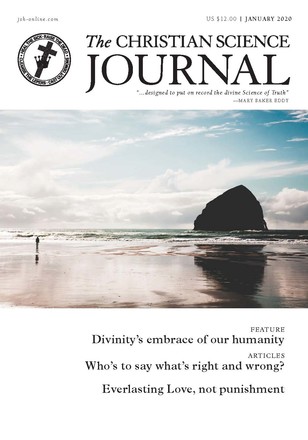