Poor Naaman. After journeying for days with his entourage to meet the prophet Elisha in Israel, he expected a reception befitting of a dignitary. After all, he was the commander of the Syrian army. But Elisha didn’t even give him the courtesy of a personal welcome. Instead, he simply sent a messenger to greet him (see II Kings 5:1–14).

As if that weren’t enough, the prideful commander was coming to Elisha to be healed of leprosy. He expected his healing to be a spectacle—something dramatic—in keeping with the monumental transformation it would bring to him. Instead, Elisha instructed the messenger to tell him, “Go and wash in Jordan seven times, and thy flesh shall come again to thee, and thou shalt be clean.”

Now, Jordan was known to be a dirty river and, in Naaman’s opinion, too lowly for a noble Syrian to enter. To be told to do something so despicable was an unimaginable insult and a shameful display of disrespect, he thought. Unable to contain his anger, he turned and left in a rage.

Elisha was not impressed by Naaman’s fury. He evidently knew that when sin is exposed, there is often resistance. And Naaman’s sin was being exposed. His servants may have perceived this, for they reasoned with their master, saying, “If the prophet had bid thee do some great thing, wouldest thou not have done it? how much rather then, when he saith to thee, Wash, and be clean?” To this there was no reasonable retort. Naaman swallowed his pride, went to the Jordan River, and washed not once, but all seven times. No doubt to his astonishment, his leprous condition vanished—instantly.

The account says to me that the real problem for Naaman was not his leprosy at all, but the pride and arrogance that made him think he could write his own healing script and tell God how it should work out. Washing in the river was merely symbolic of Naaman’s readiness to defeat the demons of ego and self-importance that were preventing him from seeing his native perfection—his wholeness as God’s spiritual image and likeness, which had never been touched by leprosy or any disease.

Humility and meekness, Jesus taught, give us dominion over all earthly, or fleshly, conditions: “Blessed are the meek: for they shall inherit the earth” (Matthew 5:5). Indeed, the result of Naaman’s liberated consciousness was the obliteration of the condition, which had never been anything more than the physical manifestation of his prideful thinking.

The times I have been in Naaman’s shoes are too numerous to count. Almost every time I’ve been sick or in need of something, I’ve felt I knew the solution. “I need to feel better so I’m ready for the big game,” or “Just let this deal go through because it’s good for the client,” or “This position would be perfect for me,” are just a few of the thoughts I’ve entertained at various times. And then I’ve proceeded to pray for the outcome I wanted.

Is it any surprise that things didn’t always go as I’d hoped or planned? Had I honestly completed the thoughts I was sending God’s way, they might have revealed a very different tone: “I need to feel better so I’m ready for the big game … and then I can show everyone how good I am,” or “Just let this deal go through because it’s good for the client … and I’ll make a lot of money and not have to work so hard anymore,” or “This position would be perfect for me … because it will be easy and not push me so hard.”

When we are willing to set aside self-will and pride, we have cleared the deck and are prepared to receive God’s guidance.

There’s more “me” in these statements than I’d like to admit. This kind of self-will, this sense that I know better than God, stands between me and my own healings at times. I am realizing more each day that until these roadblocks are removed, I am not prepared to receive the divine blessings that await me.

Mary Baker Eddy was familiar enough with these tendencies of human nature to write in her book Science and Health with Key to the Scriptures: “Experience teaches us that we do not always receive the blessings we ask for in prayer. There is some misapprehension of the source and means of all goodness and blessedness, or we should certainly receive that for which we ask. The Scriptures say: ‘Ye ask, and receive not, because ye ask amiss, that ye may consume it upon your lusts.’ That which we desire and for which we ask, it is not always best for us to receive. In this case infinite Love will not grant the request” (p. 10).

Human nature often seeks the easy or self-satisfying route, but easy and self-satisfying are not always right or best. When we are willing to set aside self-will and pride, we have cleared the deck and are prepared to receive God’s guidance. And if we follow it, we will see His goodness expressed abundantly in ways we might never have imagined.

For example, a friend of mine was seeking an internship before her senior year in college. After much research and considerable expense, she found what seemed like a dream opportunity overseas—until she realized that the job she was so excited about had been misrepresented to her and was not anything close to what she had expected.

Hopes dashed and with time running out to start over, she tried to find a similar opportunity closer to home, but she ran into one dead end after another. The prospect of finding a meaningful position, which seemed so crucial to her college career and future employment, was fading away.

In her distress, she set aside time to get quiet and really listen for God’s direction. Like Naaman, she heard a voice within her telling her to set aside the personal will that made her think she was responsible for creating this opportunity herself. She began to see that she was not the author of her story, but rather the expression of God’s story. Setting aside her personal sense of outlining was her washing in the river Jordan. She realized the importance of listening and yielding to God’s directing, and she grew more peaceful. This statement from Science and Health was a big help to her: “Love inspires, illumines, designates, and leads the way” (p. 454).

In this more peaceful state of thought inspired by God, divine Love, this young woman had an idea that seemed totally out of character for her. But it was so original, fresh, and compelling that she couldn’t let go of it. It came to her to start a business that revolved around giving to others. She had never once thought of starting a business, but the more she thought about it, the more she came to embrace the idea. As the days progressed, ideas to expand the vision flooded into her consciousness naturally, so much so that she knew the idea had to be God-impelled. The stress of finding another opportunity vanished completely.

As if to confirm the rightness of this activity, a woman she had previously sought to work with eventually responded to her and offered her what at one time had appeared to be the perfect opportunity. But as the two of them spoke, it became clear that the position wasn’t really ideal for either of them now, and they mutually agreed that it wasn’t the right time to pursue it. Rather than being disappointed, my friend was relieved.

The new opportunity was both demanding and engaging—more fulfilling than she could have imagined. What it took was “washing in Jordan”—setting aside self-will and listening for God’s direction—and then she was off and running.

A hymn in the Christian Science Hymnal says, “The Christ is here, all dreams of error breaking,” and “He comes anew, to humble hearts revealing / The mounting footsteps of the upward way” (Rosa M. Turner, No. 202). When mental preconditions for healing are removed, we are making room for God’s angel ideas, and we get a little taste of heaven. Knowing that these rewards await us, we should never hesitate to run to the river Jordan—to let go of the mental tethers that are holding back our progress. Healing is ours when we approach prayer ready to humbly listen and follow. 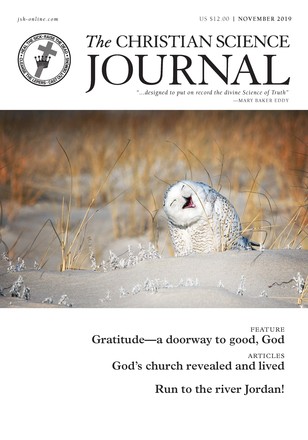 Gratitude before, during, and after a challenge

Run to the river Jordan!

Healed of disfiguring condition on hand

‘And a little child shall lead them’

An able church— When we feel the Christ-power in church, it extends to embrace the world

The not-so-lost art of grace