One day years ago I started to feel intense pain in my shoulder. I couldn’t think of any cause for the injury, and at first I didn’t pay much attention to it, thinking it would go away.

However, as time went by, the pain only grew worse. Simple daily activities became challenging, and finding a comfortable position to fall asleep in was practically impossible. Friends and coworkers suggested various physical remedies. Others suggested the problem was simply an inevitable result of aging and that I would just have to learn to live with it.

I was tempted to use physical remedies to address the pain, but I wanted more than temporary relief. I wanted to be permanently free of this condition. I wanted healing! And I knew from the many healings I’d experienced through Christian Science that we can trust God when we look to Him for help.

At one point, to find inspiration, I opened the Christian Science textbook, Science and Health with Key to the Scriptures by Mary Baker Eddy. The first thing I read was an excerpt from a letter to Mrs. Eddy where the writer explains how Christian Science had saved his life. In it he refers to God as Mind, and it reads in part: “I should have died, but for the glorious Principle you teach,—supporting the power of Mind over the body and showing me the nothingness of the so-called pleasures and pains of sense.… The ailment was not bodily, but mental, and I was cured when I learned my way in Christian Science” (pp. 382–383).

Reading this helped me realize that I did not have to accept any physical problem as permanent or chronic. I also knew how important it was not to accept this condition as any part of my identity. I stopped referring to the issue as “my problem” or as “something wrong with my shoulder.” I knew that because I am actually an infinite idea in infinite Mind, this physical claim was no part of me and could be expunged from my consciousness and experience.

I made the conscious effort to pray every time I felt pain; as I did this, in each instance the discomfort would subside. However, late one night, while I was driving home from work, the pain became unbearable. I rubbed the area, futilely looking for relief, and desperately shouted out to God, “What do I need to know, here?”

Suddenly, I remembered an experience from a month or so earlier when I thought I had awakened out of sleep with extreme pain in my side. The pain was intense and constant. Naturally, I began to pray. Then the most extraordinary thing happened: I actually woke up! I slowly realized that the entire experience had been a dream. When I had been dreaming, the pain was very real. It hurt! But once I awoke, really awoke, this seemingly real pain was totally gone.

This showed me that pain is simply and actually only a phase of mortal thought, and not of matter. It was the first time I really understood the fundamental point in Christian Science that, “Mortal ills are but errors of thought,—diseases of mortal mind, and not of matter; for matter cannot feel, see, or report pain or disease” (Mary Baker Eddy, Rudimental Divine Science, p. 10).

As I remembered this experience, I began to understand the fact that the pain was not in my shoulder—it was solely an erroneous thought held in my consciousness. And if it was in my thought, then I could do something about it. After all, how long does it take to change one’s mind? This understanding really supported my prayers as I addressed the belief of pain. In fact, the physical pain receded.

I recalled Mrs. Eddy’s statement regarding Jesus’ raising of Lazarus: “If Jesus awakened Lazarus from the dream, illusion, of death, this proved that the Christ could improve on a false sense. Who dares to doubt this consummate test of the power and willingness of divine Mind to hold man forever intact in his perfect state, and to govern man’s entire action?” (Science and Health, pp. 493–494). I realized that the Christ was coming to my consciousness to release me from a false material sense and the belief in this painful condition.

Although much progress was made that night, the problem seemed to linger. It certainly was not as bad as it had been, but I was not totally free. Several more months went by without a complete healing.

At this point, I sought the help of a fellow church member. As we talked, she lovingly asked what I was concentrating on in my prayer. Somewhat flummoxed, I said, “Well, on my shoulder, of course!” She smiled at me as I realized my mistake. Although I had spent many months mentally looking away from my body, as I improved physically I found my thought turning back to the shoulder to see if the healing was complete. I now realized I needed to completely and fully turn away from the body and only dwell on the truth of my spiritual identity—on my perfection as a spiritual idea of God.

The conversation with this dear church friend proved to be a breakthrough. The result was a complete healing of the condition. In fact, my thought was so turned away from the physical condition that I don’t even remember when the healing took place. In the succeeding years, there has been no return of the issue. 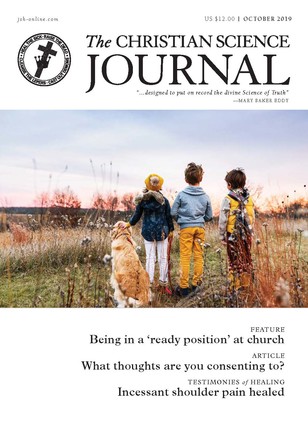 Welcoming all into the pages of our magazines

Being in a ‘ready position’ at church

What thoughts are you consenting to?

Church—affording proof of its utility through healing

The power of God’s Word

A shift in how i prayed brought healing

Freed from menopausal pain and symptoms

On my feet sharing!