I should like to relate with a joyous heart that Christian Science has helped me so much that I cannot imagine my life without it.

I pursued my career as an actress and singer enthusiastically and wholeheartedly.

I was very unhappy, therefore, when I had to stop singing one day as a result of overstrain. A throat specialist said I had a condition which necessitated an operation. I was not allowed to talk; to sing was out of the question. I was exceedingly depressed.

At this time my sister, who had just returned from the United States and had learned of Christian Science while there, visited me in my vacation spot. She encouraged me and explained God and His power and man's relationship to Him so lovingly and clearly that I immediately became happy and joyous and began my daily vocal practice without the slightest fear. Day by day things got better, and I was again happy.

Two weeks later, when I returned to the town where I worked, I went first to the throat specialist. He examined me for a considerable time and finally said: "Yes, your vocal cords are all right. I can see nothing more of the condition." I had had an instantaneous healing. That is now twenty-eight years ago, and I continued seventeen years after that in my profession. After this first healing I searched no further into Christian Science. I was then healthy, and all went well, very well indeed.

In the last year of the Second World War, however, I had much to undergo. Everything materially acquired was lost, though that did not trouble me greatly. Much worse was the fact that I was suffering from an internal displacement for which a material aid had been applied, and I had to lie down almost one half of every month. Two little children had to be taken care of, and I did not know where my husband was, whether he was well or even if he was still alive.

Then I spoke again to my sister about Science. When she saw that I was tiring myself with questions and was seeking for support, she gave me a Bible and a copy of Science and Health by Mrs. Eddy and showed me how to study the Bible Lessons, given in the Christian Science Quarterly. I studied eagerly, often late into the night, for three months. Everything I read was logical, and I was convinced that God would help me this time too.

Applicable to my case were these words in Science and Health (p. 322): "The sharp experiences of belief in the supposititious life of matter, as well as our disappointments and ceaseless woes, turn us like tired children to the arms of divine Love." I laid my whole heavy heart with complete trust in the arms of divine Love, and I was much blessed. I soon sought out a practitioner, who gave me help. On my return from this first visit to the practitioner, I paid my last visit to a doctor and had the material aid removed. From then on, I took no medicine, and I was again quickly healed, although the doctor a year before had said an operation would be unavoidable.

After this second splendid proof of the correctness of the teachings of Christian Science and their applicability, my heart was filled with gratitude for and appreciation of our rightly beloved Leader. The Bible and Science and Health became my constant companions, and I tried to solve with Christian Science every problem that came to me.

In particular I spent much time in prayerful work for my husband, who, I had learned, was a prisoner of war in Russia. I made notes of the unfoldment that came to me, with the date, so that I could share it with him. Mrs. Eddy writes (ibid., pp. 335, 336), "The Ego is deathless and limitless, for limits would imply and impose ignorance." This led me to reason one day that since God is Spirit, illimitable Spirit, man, born of God and coexisting with Him, is purely spiritual. For God there are no boundaries. God is omniscient and omnipresent. His ideas are inseparable from Him. Therefore there could be no boundaries whatsoever between my husband and me as God's ideas. I knew this fact would soon be made evident in our human experience. As I later learned, it was about this time that my husband was released from Russia to Austria. Soon afterward he arrived in Germany.

I am thankful for protection from accidents and other inharmonious conditions. I look back with joy on the healings which our children and I have experienced, many of them through the greater understanding of practitioners, always loving and ready to help, to whom I should like also to express thanks.

I am exceedingly grateful that Mrs. Eddy has given us Christian Science and thus brought the Christ so near. I am grateful too to be a member of The Mother Church and also of a Christian Science Society, in which I have been able to serve in various capacities. I am especially grateful for class instruction, which from year to year, through our association meetings, more deeply impresses itself on my thought. —(Mrs.) Magda Buresch-Okon, Osnabrück, Germany. 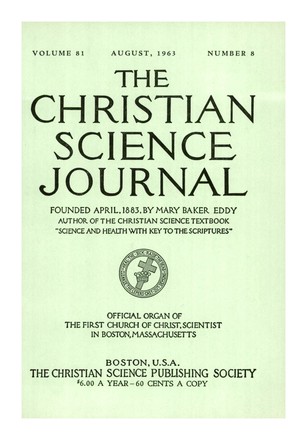 THE CHRISTIAN SCIENTIST IN COLLEGE

THE HEALING OF MIND AND BODY

COMING HUNGRY TO A FEAST

THERE IS A SOLUTION

"THE ABILITY TO MAKE NOTHING OF ERROR"

"WILT THOU BE MADE WHOLE?"

THE VERDICT OF INNOCENCE

WORKING IN THE LABORATORY OF DIVINE SCIENCE