The right to worship and to practice one's religion freely is, of course, something precious to many people throughout the world. In the United States, the First Amendment to the Constitution expressly guarantees religious liberty and, for decades, state laws have recognized the right of Christian Scientists and others to seek God's dependable care in the healing of the sick.

Of late, however, prosecutors in several states have disregarded such statutes and have prosecuted Christian Scientists in a few cases when children have not been healed through spiritual means. Clearly, this due process violation needs to be carefully reexamined by the courts. Yet Christian Scientists in the United States and other areas of the world must not ignore the fact that, at this time, their right to rely exclusively on Christian Science for healing may not always be legally respected. While legislatures and courts sort out the issues, Christian Scientists will do what they have done so well since the beginning of this movement—seek the protection of divine law, the only source of true security. And they will support through their prayer the naturalness of human law ultimately reflecting the divine.

It should be no surprise that a genuinely Christian life and practice are not at peace with the world's materialism. Mrs. Eddy spoke to this point in an address to her students. She wrote, "Admiral Coligny, in the time of the French Huguenots, was converted to Protestantism through a stray copy of the Scriptures that fell into his hands. He replied to his wife, who urged him to come out and confess his faith, 'It is wise to count the cost of becoming a true Christian.' She answered him, 'It is wiser to count the cost of not becoming a true Christian.' So, whatever we meet that is hard in the Christian warfare we must count as nothing, and must think instead, of our poverty and helplessness without this understanding, and count ourselves always as debtors to Christ, Truth." Miscellaneous Writings, p. 281.

Following the guidance of divine wisdom, Mrs. Eddy counseled her students to remain true to the aims of Christian warfare and not be sidetracked into battles that might impede their spiritual growth and service to mankind. For example, when state laws have required the presence of a doctor or midwife at the time of birth, or the reporting of certain communicable diseases, or in those instances when immunizations have been demanded by standing community health regulations, Christian Scientists have responsibly obeyed these laws.

Mrs. Eddy reminds us of Jesus' teaching "Render to Caesar the things that are Caesar's," and to God the things that are God's. In an interview with a reporter from the New York Herald in 1901, Mrs. Eddy replied, "Where vaccination is compulsory, let your children be vaccinated, and see that your mind is in such a state that by your prayers vaccination will do the children no harm. So long as Christian Scientists obey the laws, I do not suppose their mental reservations will be thought to matter much. But every thought tells, and Christian Science will overthrow false knowledge in the end." The First Church of Christ, Scientist, and Miscellany, pp. 344–345.

In a statement that first appeared in the Christian Science periodicals, Mrs. Eddy wrote, "Christian Scientists should be influenced by their own judgment in taking a case of malignant disease. They should consider well their ability to cope with the claim, and they should not overlook the fact that there are those lying in wait to catch them in their sayings; neither should they forget that in their practice, whether successful or not, they are not specially protected by law." Ibid., p. 227.

Christian Scientists depend on spiritual means for healing because of its proven efficacy in their own lives. They treasure this healing work and the growth in grace that consistently comes from trusting wholeheartedly in God. And although it is entirely natural for students of Christian Science to rely on prayer, it is also important, when it comes to the care of children, that Scientists consider well their individual spiritual readiness, their own past experience and record, and the mental climate in which they live.

While reliance on spiritual healing is central to the practice of Christian Science, decisions about the appropriate care of children are always made by the parents—not by a Christian Science practitioner or the Church. When circumstances result in a child's being brought under medical care, members of our Church would surely continue to cherish such a family and give them their full love and support during such a challenging time. Though a reliance on medical treatment clearly departs from the practice of Christian Science, we are all walking along the same road to a higher demonstration of true spirituality. To look upon one another's progress with anything less than loving encouragement would not be Christian.

All responsible people naturally turn to that form of care which they know in their hearts, and have proved in their lives, to be the most effective. If experience has shown in one's own life the sure results of Christian Science treatment, or if medical care has been unavailing, parents and practitioner should work earnestly to fulfill Mrs. Eddy's counsel: "I recommend that each member of this Church shall strive to demonstrate by his or her practice, that Christian Science heals the sick quickly and wholly, thus proving this Science to be all that we claim for it." Manual of The Mother Church, Art. XXX, Sect. 7. Christ Jesus' example and the work of his disciples and followers clearly illustrate the ever-available power of God that heals the sick.

Contrary to assertions by some critics of Christian Science, those who elect medical care are not abandoned by family and fellow church members. Nothing prevents any of us from praying for those we love. There are many ways to pray, and all earnest prayer expresses heartfelt caring, which is always to be encouraged. Yet reaching out to feel God's love in such situations is not equivalent to the actual spiritual treatment through prayer that Christian Science provides for healing. Experience has shown that reliance on Christian Science does not naturally combine with medical treatment or with other material methods of treatment. Prosecutors have argued to the contrary in court, but their assertions are wrong. Neither in Jesus' practice nor in the writings of Mrs. Eddy is there any evidence that benefit would derive from combining spiritual and material means. In addition, no practitioner, medical or Christian Scientist, would propose that two incompatible courses of treatment—as these are—be followed at the same time.

Does this mean that Christian Science turns its back upon those who are currently under medical attention but desire the solace and help Christian Science provides? No. Christian Scientists find it natural to lend compassionate support to their friends or relatives who may be struggling with illness. And even beyond this genuine caring, the individual who is seeking healing finds himself specially ministered to by the healing messages contained in the Holy Bible and in the Christian Science textbook, Science and Health with Key to the Scriptures by Mrs. Eddy. The truths about God and man which speak through the pages of these books tangibly comfort and powerfully inspire anyone seeking healing. They bring to light man's relation to God and God's promises of healing. They lift thought from reliance upon matter to reliance upon God, Spirit. Once a patient grasps something of God's law of healing, he naturally turns from material means and finds God to be an ever-present and genuinely effective, reliable help. The final chapter in Science and Health, "Fruitage," is filled with accounts of Christian Science healing which bear ample testimony to this fact.

For more than a century the Church of Christ, Scientist, has been a strong advocate for the improved care of children. We feel deeply that the care of a child, indeed the care of every individual, is a sacred responsibility. We urge all who practice Christian Science to be unswerving in their efforts to improve their practice, to offer help to those whom medicine cannot aid, and to alleviate the unnecessary suffering due to other factors such as malnutrition, drug dependency, and mental or physical abuse.

We feel it is but just to put on record the fact, for example, that there are well-documented cases of children being healed of cerebral palsy, heart disease, osteomyelitis, and kidney disease through Christian Science treatment.

The ethics and rules of Christian Science practice are well defined in our textbook, Science and Health. This practice requires wisdom, compassion, understanding, the spiritualization of thought, and the Christianization of daily life. It brings to the patient moral and spiritual regeneration along with better health. The constantly growing record of healing through Christian Science warrants a wider appreciation by mankind of the Biblical assertion "The prayer of faith shall save the sick." James 5:15.

The Christian Science Board of Directors

This article is included in:
1991 - SPECIAL EDITION

Christian Scientists and the Practice of Spiritual Healing 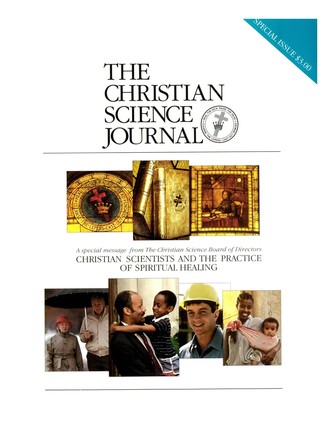 Use your talent to help humanity

The commitment worth making

The quest of mankind

"None of the above"

The snake on the garden wall

On Christian armor and facing the foe

One God, one Christ, one medicine

A WORKSHOP ON EVIDENCE of Christian Healing

"Everything that I've been given by God"

About church and practice

From the outset the "how" of spiritual...

What does the work?

The role of the practitioner

Science and Health with Key to the Scriptures: Its impact on health

How shall we think of our body?